When 44-year-old Melanie Connell was knocked over in a hit and run accident at just nine years old, doctors were unsure whether she would ever walk again.

The impact of the car sent her careering through the air and hitting her head on the curb which resulted in her sustaining a traumatic brain injury alongside a broken pelvis. The injuries she suffered as a result of the accident were so severe that Melanie was in a coma for four days.

To the huge relief of her family, Melanie did come out of her coma, however doctors doubted she would never walk again. But Melanie had other ideas.

She said: “As a child it was difficult to fully grasp the extent of my injuries, so when the doctors told me I may never walk again I thought ‘that’s so silly, I haven’t even broken a leg!’”.

And true to her word, Melanie proved doctors wrong as she was walking again within two months, albeit clumsily. But learning to walk again was not the only challenge that Melanie encountered.

“I had to re-teach my body to do the things I took for granted before the accident. I couldn’t brush my teeth or use a knife and fork and my speech was very slow. I also suffered from constant double vision, paralysis on my right side and bladder problems.

These things were challenging to overcome, especially at such a young age.

Melanie’s recovery continued for many years, but she still experiences numerous effects of her brain injury today.

She said: “I have what’s known as a clumsy gait, I struggle walking up stairs and I have also had to learn how to hold my head in a particular way to counteract the effects of double vision.

“One very ordinary thing I find quite hard is carrying cups of tea or coffee! If I don’t concentrate really hard, I spill the drinks due to my poor coordination. People assume I am just clumsy which is fine unless I am having a sensitive day.”

It’s not just the physical challenges of her injury that Melanie has to deal with, but also the emotional effects. She explained: “It was quite hard in school, as kids tend to shy away from things that are different. Not being neurologically ‘normal’ left me feeling isolated and lonely.

I felt faulty as a child. I suffered a lot with anxiety and depression which has remained to varying degrees. Kids teased me in school and that social isolation has continued throughout my life, never quite feeling I fit in.

Despite facing these challenges, Melanie went to college after school, completing her GCSE’s and A-Levels before moving on to Liverpool University to gain a degree in Archaeology. She now works full time as a cycling instructor and lives with her 18-year-old son and mother.

Melanie says that cycling had a huge impact on her coordination and confidence.

“When I taught my son how to ride a bike as a child, I discovered it was enormously useful in helping my balance and coordination. So much so I took up a job in the industry!”, said Melanie.

During the COVID-19 lockdowns, physical exercise has helped Melanie to cope with the isolation and loneliness she has felt. She signed up to take part in a virtual challenge to walk the equivalent distance from Land’s End to John O’Groats, a total of 874 miles, which she completed in just 63 days!

“Connecting with nature is a great way to feel less isolated. On my daily walks I often stop just to listen to bird song and practice mindfulness, living in the moment and appreciating the things I have around me. Being able to do that and smile and nod at passers-by has helped me feel less alone”, said Melanie.

Having support from her family and close friends has also helped Melanie. She said: “Being listened to and listening to others has helped me cope with the latest lockdown, having mutual support mechanisms has allowed myself and those I connect with to feel less isolated.” 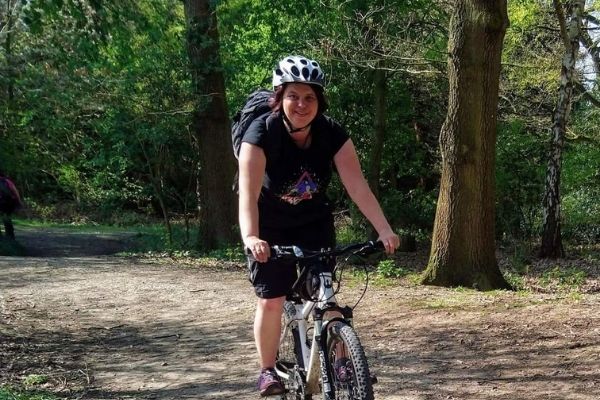 Cycling had a huge impact on Melanie's confidence

Melanie hopes that Headway’s campaign will help people understand that the effects of brain injury can often make the survivor feel isolated and that it might lead to people showing more compassion and understanding.

Melanie said: “The lockdowns have been tough on us all, but having a brain injury can leave you feeling like this a lot of the time. I was often very upset or hurt and isolated when people judged me, particularly in my youth, jumping to conclusions of drug use because of clumsiness and falling over, when it was totally out of my control.

If one thing can be taken from all our experiences it is that you never know what someone is going through, so please be compassionate and understanding.

A life of lockdown?

'A life of lockdown?' will focus on social isolation after brain injury, a problem we know has been exacerbated by the Covid-19 pandemic.

A life of lockdown? Derek's story

"Partners, friends, people who have been close and known me for years – simply walked away."