“My creative piece is about me and a friend of mine. I met him in my first year of senior school and he is still a friend. It’s about how I see and compare our lives. In 1996 when we met, I picture us in two Formula One racing cars burning down the race track.

"We are racing at a similar speed until I am diagnosed with my first tumour which sends my car out of control and smashes into a wall while his car carries on going. So as you can probably tell by now, my friend's car is way ahead of me, he has probably lapped my car a fair few times by now.

“That is how I see my life. It feels to me like the first operations I had were the big life changer for me and kind of put my life on hold or is going by very slowly while his life and other people's lives are way ahead of mine.

"I feel my friend has achieved much more than I have. He has had various girlfriends and now has a wife. He has had a few jobs and has had decent promotions. He has gone on holidays abroad. He has his own house whereas I don't have any of that.

“I see Headway as the pit stop and they are rebuilding my car and adding aerodynamics to make me possibly catch up to my friend's car.

"I may not have done most of the things my friend, and even most other people, have done but with the help of Headway I am leading my life, or F1 car, in a slightly different direction.”

What does A New Me mean to you?

For me ‘A New Me’ is great because not only do I get to show off my artistic talent but I also get to speak about my story, tell it in the way I want to tell it and not be interrupted. There has been many occasions where I have told my story to people but never been able to finish it or I get interrupted and that can be annoying. 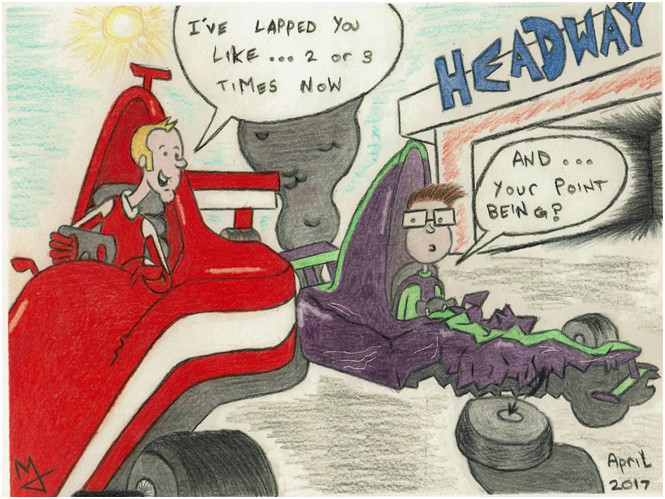 Matt Johns - "I see Headway as the pit stop" 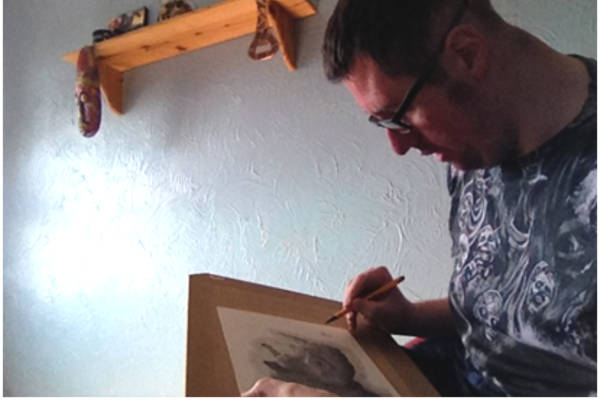 Do you feel like a new person after your brain injury?

I feel a part of me is new. It’s a little hard to tell because I was a kid, had major surgery on my head and spent the rest of my life adapting to this new person. I don’t remember too much of what kind of a person I was when I was little but I think I liked myself back then.

One big example was at school. I had a friend who I saw as my best friend. I hadn’t seen him for a while as I was off school having surgery. After many months, I returned to school and bumped into him again but he did not recognise me at all. I was so glad to see him and when I said ‘Hi’ to him enthusiastically he had a puzzled look on his face and said “Err… hello” as if I was some sort of stranger to him.

I was quite saddened when he said it like that, and from then on we never actually spoke again.

Do you feel like it's had a positive/ negative impact on your life?

I think in the majority the brain injury has had a positive impact on my life. I would prefer to see it in a positive light anyhow.

A friend who used to volunteer for my Headway once said that they see good things come from bad things and I completely agree with that because all the stuff I have been through over the years. It is terrible but in some ways I am glad it happened, because if it didn’t happen then I would not be at Headway.

I would not know the wonderful people I know now and I would most certainly not be writing this for Headway.

When I was going back to senior school I had to face new obstacles to me that I didn’t like. I have balance problems and I would get frustrated with that.

I have thought before what my life would be like if I grew up without a brain injury and I think I would probably be in a better position in life but that is a total guess.

I did spend about six years of my life doing next to nothing and this is where I lost a lot of confidence and motivation and I was very antisocial.

My Headway has made me more social with people now but I still think I can be quite a quiet person at times. I have been told by my current manager, Deborah Robinson, that I am a quiet and unassuming person. I’m hoping the ‘unassuming’ part is a good thing.

I’ve never had a paid job in my life, not even as a paper boy. The only real job I am actually in the middle of now is being a volunteer for my Headway group. I volunteer once a week and I am known as a Service User mentor. It’s obviously not a paid job but I see it as my job and the benefits I get and earn is my pay.

Has your outlook on life changed?

I think it has in some ways because I wanted to copy my older brother. I wanted to go to school, college and then university and then get a job but that ship has sailed now.

I do think of what the future holds for me when my parents are gone and where I will be. But right now, I really don’t know what will happen to me. The way I should see it though is, it’s best not to know what the future has in store. I was asked once if I was optimistic about the future but thinking more about it I am not so sure.