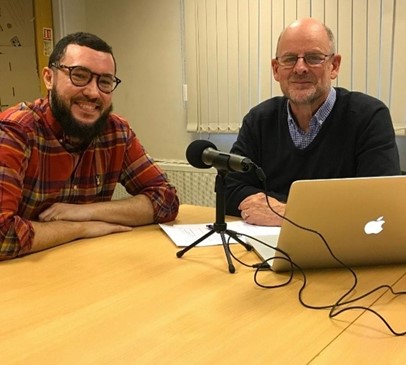 The pair both attend Headway Bedford, a charity which aims to improve life after brain injury, and it was there that the idea of a podcast was born.

Joshua said: “We are both so proud of this podcast. To be able to use our own experiences of stroke to help others with brain injury is an honour.”

In May 2018, Joshua experienced a stroke and a heart attack while undergoing a lung transplant to treat his long-standing cystic fibrosis. He was placed in an induced coma for two weeks and despite the odds, he pulled through.

“I bled out on the table and died for two minutes,” he recalled. “I was at the very end of my life, my mum had to sign a form to donate my organs.”

Thankfully, Joshua made it, but he was left battling the effects of his injury such as sight loss and right-sided weakness.

Around the same time, June 2018, Stephen suffered a stroke. He was delivering a presentation at work when he began to feel unwell. Things got progressively worse and Stephen was unable to stand, walk or talk.

He was rushed to the hospital and spent two weeks on the stroke ward before returning home.

“It was a scary time,” said Stephen. “I went from being someone who was always on the go, very proactive, to someone who couldn’t do much of anything anymore. My mind was in meltdown.”

Both were supported by Headway Bedford, a local charity that helps brain injury survivors, their families and carers. Here, they work on their rehabilitation and socialise with others affected by brain injury.  They were both enrolled on a pre-vocational course which aims to give survivors the knowledge and skills needed to return to employment.

It was during one of these sessions that Joshua and Stephen began to discuss the possibility of launching a podcast about brain injury. With the help of the charity’s Lead Care Co-ordinator, Faye Hickey, and fellow brain injury survivor and podcast audio producer Jamie Rutherford, What Memory…? was born.

Joshua said: “Initially, we had a lot of difficulty turning the podcast from an ambitious idea into a reality. We struggled to find an editor and then had to adapt to remote working because of coronavirus, not to mention the fact that the effects of our stroke acted as a constant barrier.

“To be able to listen to the finished version, knowing how much time and effort Stephen and I have put into it is overwhelming.”

The debut episode focused on the impact of COVID-19 and drew parallels between the isolation felt by those in lockdown and brain injury survivors coming to terms with their injury.

Stephen said: “The podcast aims to do three things – to share our own experiences in the hope of resonating with others; to encourage fellow survivors to share their own coping strategies; and finally, to educate the wider community about brain injury.”

Reflecting on their experiences of stroke, Joshua and Stephen said: “Recovering from a stroke is not a clear path, for both of us, it has been a slow learning curve and we hope our experiences can help others in similar situations.”

Joshua now volunteers for Headway Bedford and Stephen continues to attend the rehabilitation centre. Together, they plan to carry on producing episodes of What Memory…? for as long as possible.

Headway's local groups and branches offer a wide range of services to support people with brain injury, their family members and carers.

Continued care in your community

Headway groups and branches have shown incredible dedication and resilience as they continue to support those affected by brain injury.