The diagram below shows which areas of your brain control different activities. 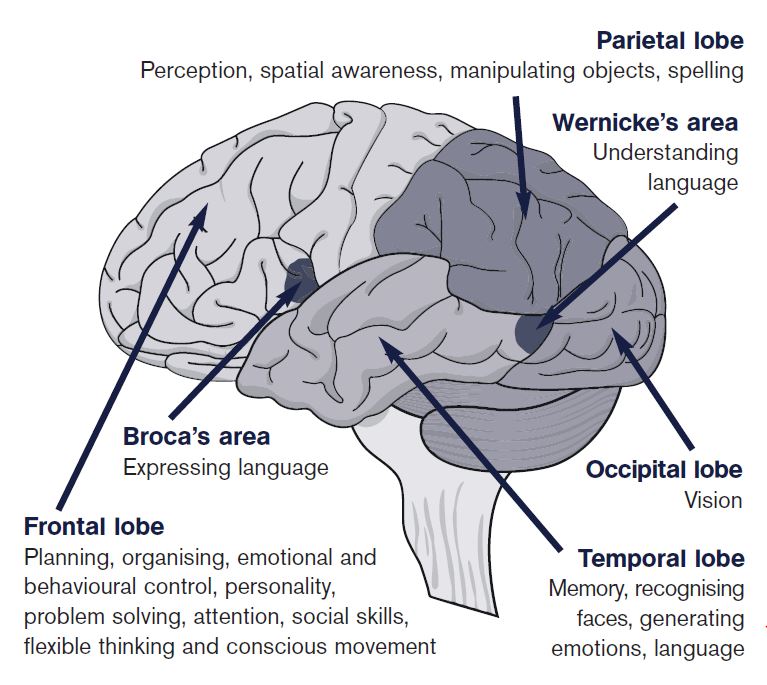 Damage to a particular area can affect that activity. A stroke tends to affect a specific area of the brain, whereas a head injury due to for example, a road traffic accident, usually involves more general damage.

For most of us, the left side of the brain controls language, while the right side controls our more artistic abilities, such as drawing and music.

The largest part of the brain is known as the cerebral cortex and is shaped like a large wrinkled walnut. It is divided into two halves and joined by a bridge in the middle, referred to as the corpus callosum. The two halves are known as the right and left cerebral hemispheres. The right hemisphere controls the left side of our body and the left hemisphere controls the right side of our body.

Damage only to the right side may affect movement in the left arm and leg or hearing in the left ear. There is also evidence that for most people the left hemisphere contains the language centres involving speech, while the right hemisphere tends to control non-language, spatial skills such as drawing or musical ability.

If a person receives injuries only to the left side of the brain, by for example, having a stroke, it is likely that speech would be affected, as would the ability to move the right side of the body.

As well as dividing into a left and right hemisphere, the cerebral cortex can be further divided into a number of areas, known as lobes:

The frontal lobe is the area behind the forehead and is heavily involved in intellectual activities such as planning and organising, as well as being involved in personality and the control of emotions and behaviour.

Located behind the frontal lobe, at the back of the brain above the ears, these have an important role to play in our ability to understand spatial relationships (e.g. the distance between two objects).

Nestled behind the ears, this area holds the bulk of our memories and our ability to understand things and speak.

At the very back of the head, behind the parietal lobes, are the occipital lobes, which are responsible for vision. Any injury to this area can cause partial or complete blindness.

Internal areas of the brain

Hidden in the middle of this walnut-like cerebral cortex are a number of small white nerve centres, collectively known as the diencephalon.

In this area lies the small pea-sized hypothalamus, which controls appetite regulation, sexual arousal, thirst and temperature control, and some aspects of memory. 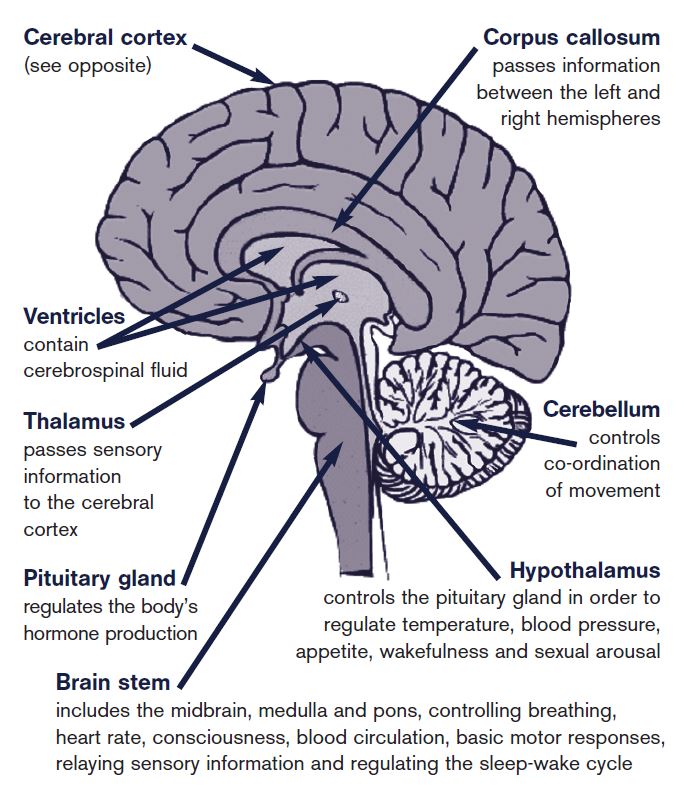 Close to this area is another important set of nuclei, referred to as the limbic system. Damage to this area can disrupt emotional regulation, leaving the individual with dramatic and sudden mood swings.

The brain is completely surrounded by a hard, protective, rounded shell of bone, known as the skull or cranium. The important thing to remember about the skull is that underneath the front, there are a number of bony ridges. When the soft tissue of the brain is shaken around, these ridges have the unfortunate effect of lacerating and damaging the underside of the front of the brain.

On the floor of the skull is a hole where the lower part of the brain or brain stem is connected to the spinal cord, and from there to the whole of the nervous system and the rest of the body. The brain stem is rather like a thick telecommunications cable, with countless nerve fibres, like wires, carrying messages backwards and forwards. It is also known to control bodily functions such as wakefulness, consciousness, tiredness, heartbeat and blood pressure. Damage to this area is thought to cause concussion and loss of consciousness.

Between the pia and arachnoid membranes is the subarachnoid space, where the blood vessels supplying and draining the brain pass through. Like any organ, the brain is dependent on blood from the heart, and is criss-crossed by a network of large arteries, which divide into progressively smaller branches. When the brain is shaken about in a head injury, these vessels tear and bleed. As people get older, the blood vessels become more brittle and more likely to tear if shaken around. This bleeding leads to a build-up of blood clots, which pressurises and damages the delicate tissue of the brain.

The brain in its membranous sack floats in a sea of cerebrospinal fluid, which fills in all the gaps around the brain and offers some protection and cushioning. Just behind the brain stem sits a curved lump of tissue called the cerebellum. This area regulates all of a person’s fine motor co-ordination, which is involved in skills such as balancing, moving quickly and gracefully, dancing, threading a needle, or climbing a ladder.

The make up of the brain consists of billions of microscopic nerve cells. Under a powerful microscope these cells look like small dots with a network of hair like tentacles, referred to as axons and dendrites. They communicate with each other by passing electrical and chemical impulses between these tentacles. Highly complex patterns of communication, or pathways, build up as the brain develops throughout childhood.

The effect of a head injury on this delicate substance is similar to that of vigorously shaking a plate of blancmange - it shears and tears, disrupting those pathways of communication.

Find out about the different causes of brain injury, such as trauma, stroke, viral infection and loss of oxygen to the brain