At 24, Mark Ballentine, from Ballymena, had it all to live for. He was engaged to be married to a girl he adored, had a job he loved, and his friends and close family were his life. But in a single night – and with a single punch – Mark's carefully mapped out plans for the future were turned upside-down as the incident left him with a devastating brain injury. Twenty years later, Mark is almost fully dependent on his mum Kathleen and dad, John.

Having helped her son rebuild his life from scratch, Headway Ballymena member Kathleen Ballentine, 69, won a Lidl Hero award for helping others affected by brain injury and she shares her family's story below...

One punch changed everything

"As the brain injury Mark sustained on 1 September 1996 at the hands of a stranger was so severe, the young man he had been disappeared," said Kathleen.

“It was like getting to know a new person. Even twenty years on, Mark still struggles to communicate because of the assault. Part of his brain and identity died that night.

"For us, one punch changed everything. It changed Mark and it changed our whole family. He lived, but we still grieved for the Mark we once knew. A serious brain injury can transform someone you love from one person into another. It’s very difficult."

More than two decades on from the attack, the dreadful events of that night and the weeks and months that followed are still raw in Kathleen’s mind.

He was never in trouble

Kathleen remembered: “I had dropped Mark and a friend off at a pub outside Broughshane, in County Antrim, quite late in the evening. They were going to meet Mark's fiancée and other friends for a birthday party.

“When I got a call from his fiancée to say Mark had been taken to hospital a little while later, I wasn’t overly worried as she thought he was okay. He was never in trouble so I thought it was some silly row and I’d just be going to pick him up and take him home.”

But the reality was much more serious. By the time Kathleen arrived at Antrim Hospital, Mark had already been taken to the operating theatre.

The impact of the assault had caused a clot on his brain and doctors were forced to bore a hole in his skull to relieve the pressure.

Kathleen continued: “I’d gone on my own to the hospital, but I hadn't been gone five minutes before the police arrived at our house to take John and our other son, Steven, to the hospital after me. Our daughter Sharon followed with her aunt.

"Mark came out of theatre at 6am and was taken straight into intensive care. The doctors tell you the worst-case scenario. They told us to prepare for the worst. My son was on a life support machine and we really thought he might have passed away right then. The day after he suffered a stroke.”

As dark as those days were, Mark, now 44, gradually came round from his coma. It wasn't until three months later he was able to leave hospital and finally made it home to be with his mum and dad.

“The stroke had left Mark with weakness in his right side and his speech was affected," said Kathleen.

“Brain injury also caused him to develop epilepsy. At the start of his recovery, Mark couldn’t speak but, thankfully, he did recognise people. He recognised us and most of his friends."

"Over the years, the fiancée he adored drifted away, as did many of the friends he had known all his life," she continued.

"His friends disappeared to get on with their own lives. It can be very lonely having a brain injury because, while he wasn’t the same Mark he was before, he knew those people as his friends. Then they just weren’t there anymore. 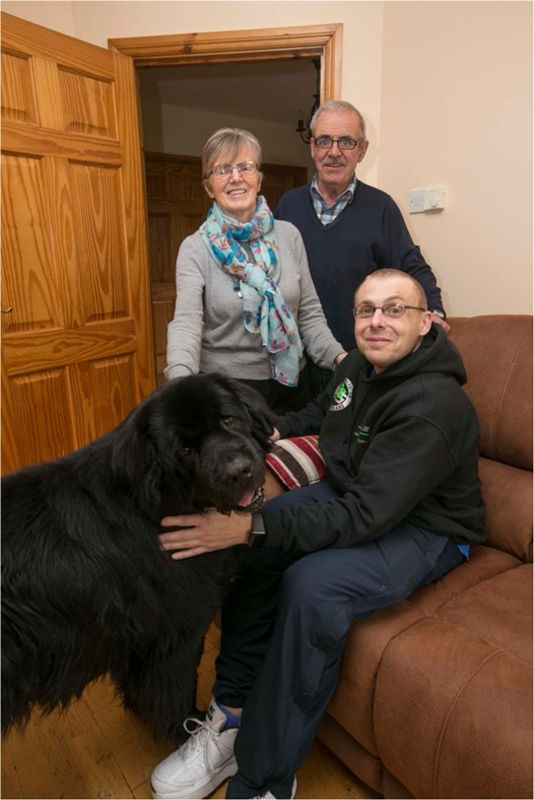 "It can be hard because you think of the young man he was before brain injury. Mark was always a very outgoing young guy. He had the friends, the fiancée. He had it all ahead of him. But we’re lucky too because sometimes you can see a little bit of Mark shining through with his wonderful sense of humour.

“People don’t seem to realise how many families are affected by brain injury until it happens to someone you know. Whether it is because of a brain aneurysm, road accident, fall, or even choking which can cause untold damage if the brain is deprived of oxygen – brain injury can happen to anyone, at anytime and the life changes are often huge.

“Headway Ballymena gives us all much-needed companionship. For that, we are so thankful. As a family, we can share our experiences and it helps to have someone to talk with about brain injury who understands.

"Mark also attends drama therapy sessions with Pamela Bell, a volunteer for Headway in Northern Ireland, which acts as an emotional support in addition to building his confidence and life skills."

You adapt to change

Mark has made remarkable strides in his recovery over the years and, with the support of family and her friends at Headway Ballymena, Kathleen does her best to make sure he is able to lead a happy and fulfilled life.

Kathleen added: “Over the years, you just get on with it. You adapt. Mark likes talking to people, though it can be difficult for new people to understand him.

"He can get out and about now too, and has even began a part-time volunteering job every Monday. His colleagues are very good to him and he really loves having a sense of purpose.

“Mark's brother Steven also takes him to the gym and he loves that interaction with people, but for the rest of the time he stays at home with us. A very placid and gentle person, he’s still got his sense of humour so that’s a great comfort."

Think twice before striking a blow

A man was arrested and charged with Mark’s assault. He was later given a suspended sentence.

“I worry that people don’t realise in a moment of mindless aggression just how serious their actions can be," said Kathleen.

“If people could see firsthand the devastating impact a pointless fight can cause, they might think twice before striking a blow. Brain injury is not just about the assault victim and one punch can change so many people’s lives.”

Today, Kathleen devotes her time to helping not only her son but other families affected by brain injury at the Headway Ballymena support sessions. In 2016, Kathleen's work with the charity earned her a well-deserved place as a Lidl Hero at the supermarket's annual awards ceremony.