Ever since she was a little girl, Alison Winterburn, 53, has been a go-getting optimist who refuses the concept of failure. A high-flying academic research fellow who also taught A-level psychology at Altrincham Girls Grammar School in Cheshire, it never occurred to Alison that she may one day have to press pause on her career.

In 2012, Alison fell unexpectedly ill with what turned out to be viral encephalitis. The mother-of-two was rushed to Accident and Emergency very quickly and treated by a doctor who specialised in neurology.

"The doctor identified that it was serious and rushed my case through immediately," said Alison.

"He gave me anti-viral medication to ease the swelling in my brain. Even at the worst point of my ordeal, I don't remember losing consciousness entirely."

Despite receiving rapid care, the encephalitis nonetheless left Alison, who lives in Croft Village, near Warrington, with severe scarring on the left frontal lobe of her brain that was to change her life forever.

"I felt very groggy and dizzy for many weeks," said Alison."When I returned home after spending three weeks in Manchester Royal Infirmary, the scariest thing was that my brain injury had caused extreme short and long-term memory loss.

"The first major indicator that I was suffering from memory problems occurred when I arrived home after being discharged from hospital.

"When I first looked in the mirror after my brain injury, I did not recognise my reflection and I truly believed it was still the 1970s. I was genuinely shocked to see a middle-aged lady looking back at me - and not the twenty-something youngster I expected. This unnerving bout of confusion lasted for several weeks. Gradually, my short-term memory improved and, with the continued support of my family, I slowly came to terms with the real middle-aged and married-with-children 'me'. I effectively had to relearn who I was.

"For a long time I wouldn't allow my husband to buy the newspaper because I was horrified by the inflated prices. I couldn't quite comprehend the time jump between the era I thought I was living in and my twenty-first century reality. My catchphrase became: 'It's how much?!'" 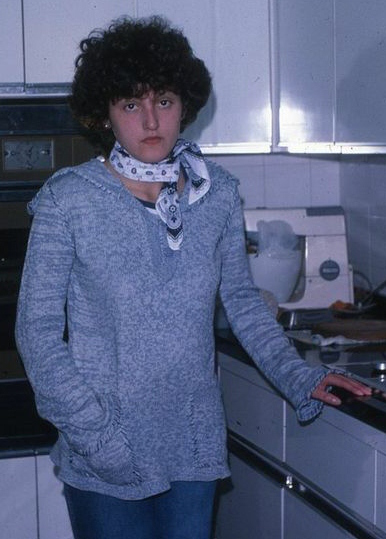 In addition to Alison's confusion, she was not able to drive for ten months after being discharged from hospital, and her severe memory loss meant that she would become lost and frightened on a daily basis.

"The major problem I face even today is not knowing where I am," said Alison.

"Last September, I decided to return to my job in the classroom and I was determined to show my students and myself that I can overcome adversity. I would not be held back by a knock to my health.

"Despite having worked at the school for a number of years, I struggled to remember basic things and even had to ask directions to the toilet. I was devastated, but I eventually resigned myself to my new limitations and retired from my teaching post.

"Even today, life can prove very difficult when people do not understand why I suffer from memory problems and I sometimes think of that teenage girl in the mirror, wishing I really was her again.

"However, my two now-adult sons have been encouraging and resolutely positive ever since my brain injury and I am determined to rebuild my sense of self-worth. I recently started attending creative writing sessions every Wednesday at Manchester Library, which provides a space for me to push and express myself.

I know I can no longer live the life I had before brain injury, but I'm fighting so hard to build a worthwhile new one.

I went out and returned, independently,
Intervened with shared library experience,
We read our own and evaluate for each other.
From A to C, library to Oxford Road,
Intervening with B the Cornerhouse,
An excellent location.
Travelled, performed, assessed, enjoyed, returned,
Many marathons have been successfully completed,
The efforts required to get around, are the most complex,
What was the easiest is now the hardest,
Get driven to the station,
Travel alone, to the unknown,
Never have I seen this journey before,
Although it was undertaken only two weeks ago,
My brain doesn't hold the information,
Don't know the way, but know who to meet,
Independence is so very sweet.
We have the apps, we have the satnav,
Fortunately for me they let me know where I should be.
Knowing what I don't know is fortuitous,
Allows pre-emptive strikes.
Make up for the missing, enjoy the present,
Focus on the here and now,
Ensure each day has been enjoyed,
Not who I was, but life will go on.

Encephalitis is an inflammation of the brain, most often caused by infections.