A Windy Moment by Nick...

Nick Fletcher shares his story of recovery after a sustaining an unlikely and severe brain injury on a windy day in 2013. It's been a long journey, but in 2022 Nick joins Team Headway in the TCS London Marathon, raising vital funds to help improve life for other brain injury survivors.

"In March 2013 on a very windy and snowy evening I was excitedly moving into a new flat near Clapham Junction when a telegraph pole fell and landed on my head while walking to the front door causing me massive damage to my skull and severe trauma to my brain.

"Obviously, this was an extraordinary piece of bad timing, but I did have some luck on my side, as an off-duty fireman was driving past. He stopped and knew exactly what to do in those critical minutes before the ambulance arrived. He, together with another driver, who had seen it happen, kept me alive in those crucial few minutes and I am deeply grateful to them both.

"Another bit of good fortune was that St George’s Hospital Tooting was nearby and my life was saved by a neurosurgeon whose team was led by the world-renowned Henry Marsh CBE. They removed a third of my skull and I was put into an induced coma for nearly a month with the hope that the swelling would subside and I would start to recover.

"The fact that the impact of the falling pole had shattered my skull was actually extremely “fortunate” as this prevented deadly pressure from building up inside my skull before the surgeons would have had a chance to operate in order to relieve the swelling.

"Aside from my ‘good luck’, these were terrifying times for my family and friends. They had been told that I was very unlikely survive that first night and, if I did, the team had no idea how I would be when brought out of the coma.

"Another issue was that whilst I was under the telegraph pole, some of the dust from the pole got into my lungs which gave me a form of pneumonia, which was a serious challenge. This was unknown to me as it happened while in a coma.

"After a few weeks I was brought out of the coma and was placed in Intensive Care. I entered a new phase of my recovery with a lot of people around me who had been by my side every single day, and who had no idea what I would be like after regaining consciousness.

"I spent the next few weeks in Kent Ward at St George’s where I had a lot of rehab treatment, including neuro-physio and re-learning day to day tasks such as making breakfasts etc. With the absolutely first-class treatment I received my recovery happened incredibly quickly - to a point where I was called ‘a miracle’ by the nurses there.

"I cannot thank the neurosurgeons, the doctors, the nurses, the physios and the whole fantastic team enough – I owe my life to them all.

"After waking up, I remember seeing my girlfriend Laura, who I had only been going out with for a few months. She was told that I might never get back to anything like what I was, but she stuck with me throughout the entire thing, and never considered not staying by my side.

"We are now very happily married, and we have a two-year-old daughter.

"I went back to my job as a shipbroker in the City, gradually building up the days I worked. My company’s management, and the team I was (and still am) a member of, could not have been more supportive in allowing me slowly to get back into it. 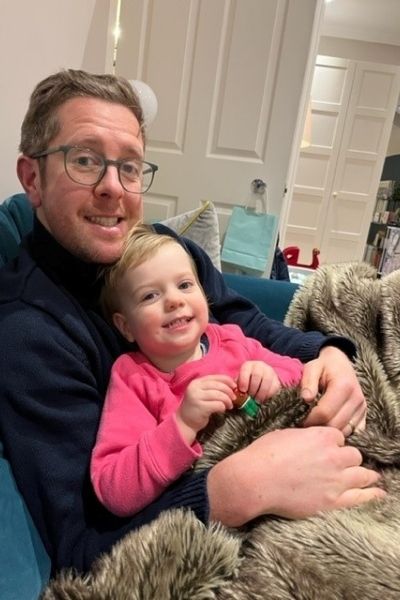 "After all of these experiences I’d really like to give something back.

"So this year, I’ve decided to run the London Marathon alongside one of the current neurosurgeons at St George’s, and a friend who has previously run the Marathon Des Sables, who are raising funds for the Neurosciences Research Foundation. I am raising money for Headway to help give people who have suffered traumatic brain injuries the best chance possible.

"Headway helps so many people with traumatic brain injuries, and I assumed I would be one of them. My parents had been told about this charity on day one of my stay in the neuro intensive care ward. They knew, and subsequently I knew, that I would have their support if I needed it.

I hope that, alongside my run, sharing my story of why I’m running may help to raise funds for others to have hope too.

You can support Nick and the rest of Team Headway on our London Marathon fundraising page.

2nd October 2022 - Set yourself the ultimate challenge and take your place alongside your fellow Headway Heroes on the start line of the iconic TCS London Marathon!

Take on a challenge

Runs, treks, walks, cycle rides and skydives to inspire you while helping Headway to improve life after brain injury!