What actor would play you in a film about your life?

There's not many who can capture my good looks and roguish charm - so it would have to be Danny DeVito!

Walks with my dog in the local forests; playing my guitar; things going the way that I hoped they would (which they seldom do!)

I don't know if anyone understands. I think the media often depicts sufferers in a negative way and people sometimes assume we're going to behave as though we're an unpredictable child. My injury leaves me feeling tired and having issues with nocturia. No need for anyone to talk slowly to me or ask the person I'm with if I would like a cup of tea!

What is the most frustrating thing about your brain injury?

It has destroyed my social life. I often feel overwhelmed with the day by about 5pm and go to bed. I would love to be loved and would have loved to have had a family of my own but I have had to accept that I may never have another relationship.

I was misdiagnosed until very recently and it now seems as if a few of my issues have been compounded by sleep apnoea. In fact, despite being operated on in September 2015 only in this last week have I had a trial with a CPAP machine.

How has Headway helped you?

The 'My Story' feature you did after I had a collection of short stories - 'Grim Fairy Tales' - published has helped me and, I hope, helped others. I have posted a link to it to various people and pages and feel it helps them understand what I went through and gives other survivors hope in that while their life might not be the same but in some ways it may now be better.

I have been playing guitar since I was a teenager and have improved more since my operation than in all the years prior to that. Likewise, I now know I was beginning to suffer with a meningioma while I was taking my degree in Literary Studies in the 90s and for years I struggled to remember the meaning of new words. As someone who loves words and who has a very good vocabulary that was a mystery to me at the time but post-operatively I can remember new ones with ease!

What would your superpower be?

For more of the things I do to be a success.

I would love to help people and make the world a better place. I would love to open an animal sanctuary and use the money success brings to ease the suffering of those that don't deserve to suffer.

What is your most treasured possession?

I'd have to say my dog but she's not my possession as she's the boss o' me (to quote Father Ted!)

What’s the worst thing anyone has ever said to you about brain injury?

I can't abide racism and one woman made a racist comment to me in a conversation on Facebook and when I remonstrated she said I was "broken". 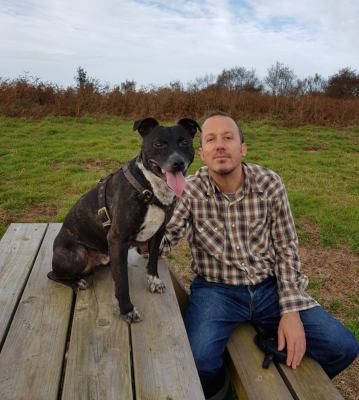 How do you relax?

Again, walks with my dog and playing guitar. I may write gothic literature but I have a good sense of fun and love dancing along to old clips of Sha Na Na on YouTube!

What is the most important lesson life has taught you?

To do things that make you and those that you love happy today for tomorrow is not guaranteed.

I see people struggling to pay mortgages that they can barely afford so that in 30-40 years they will have a life of ease. I hope they do but cut your coat according to your cloth and try and be happy today.

What has been the most positive aspect of your brain injury?

Being able to remember new words again, and my being able to play the guitar better than I could before. One positive aspect is that I now have no sense of embarrassment whatsoever. Mine was a right frontal meningioma and apparently damage to that area can cause disinhibition. That doesn't mean I'm going to go streaking anytime soon but I can be very forthright with my opinions! I suppose some people would now say I've a touch of Victor Meldrew about my disposition but I never did suffer fools gladly. I've always bucked the trend and been my own man. Not for me going along with the crowd!

Tell us about your book? What inspired it?

I now realise that I was suffering from the effects of a brain tumour when the first draft of the book was written. I've since found out that there's new speculation that the writer Edgar Allan Poe might have had a brain tumour and comparing his literary obsessions with mine it makes sense to me. I love the book 'Wuthering Heights' and the influence of the 'mad, bad, and dangerous' to know poet Lord Byron had on the character of Heathcliff. Historian and critic Lord Macaulay described the Byronic hero as "a man proud, moody, cynical, with defiance on his brow, and misery in his heart, a scorner of his kind, implacable in revenge, yet capable of deep and strong affection".

In my new book - 'Temptation and Denial' - I leave it open as to whether the central character is the Devil but having written a thesis on 'The Metamorphosis of The Devil in Legend and Literature' I am able to make a lot of philosophical observations about the nature of belief and mythology. I was a very tortured and anguished man when I first wrote it and believed that a true love could make everything right if only I could find her. I never did find her but the character in my book does find his beloved but there's a plot twist as to why they can't be together but it can be summed up as a 'tale of immortal love: a love that can survive physical death'.

Since taking part in this Q&A, Adam released his new book Mallard the Quack.

Join three conmen posing as men of science in their quest for cash at any cost - hampered only by their ignorance, incompetence, arrogance, deceit, desperate greed, and ill-conceived plans.

Writing a book after brain injury