Here, Emma Lindsay shares her experience of brain injury in her own words.

Let me tell you my story. I was 35 when I found out I had a cancerous brain tumour. I was working full-time for the Department for Work and Pensions and after 15 years I decided I needed a career change - something hands on, something out of the office world, something that would enable me to see and help people.

I enrolled on to a university course one month after I quit my job in 2015. As a mental health nurse, I felt like I could do what I dreamed of. But in April 2016 on my second university placement I took ill.

Prior to this I had dizzy spells and couldn’t look up as it made my head hurt and I felt sick when I made quick movements. I just put it down to exhaustion and stress. I experienced severe headaches and I was vomiting; I knew something wasn’t right then. The staff at my placement called 999, but after an hour with the paramedics and going through all of the health checks, they couldn’t find anything wrong and they said that if my symptoms persisted I had to see the doctor the following day.

I was too ill to continue working, so my mum and dad came up to help me get home, my dad drove my car back. I went straight to bed still feeling rubbish, then at 2am the following morning I woke to a splitting headache. My nan took me to the emergency doctors the next day.

After a short consultation my doctor told me go to the hospital immediately. He drew up a note and put it in an envelope and told me to hand it to the receptionist at the hospital. After x-rays and CT scans I was taken to a room with my mum and told I had a tumour at the base of my brain. This explained my symptoms.

I was blue lighted to the emergency ward at the Heath, Cardiff where I had emergency surgery to my head to release the fluid that was suffocating my brain. Two days later I had another operation to remove the tumour.

I spent over a month in hospital with the physios as I had to learn to walk and eat again, and I had limited sight in my eyes, especially my left side. My motor functions were like a toddler. My left side was weak and from being in a bed all day it wasted away my muscle mass in my legs.

It was five weeks after my operation that I was told that my tumour was cancerous. My world just fell apart, within seconds of being told I had cancer I just sat there in silence with a thousand questions for the consultant. 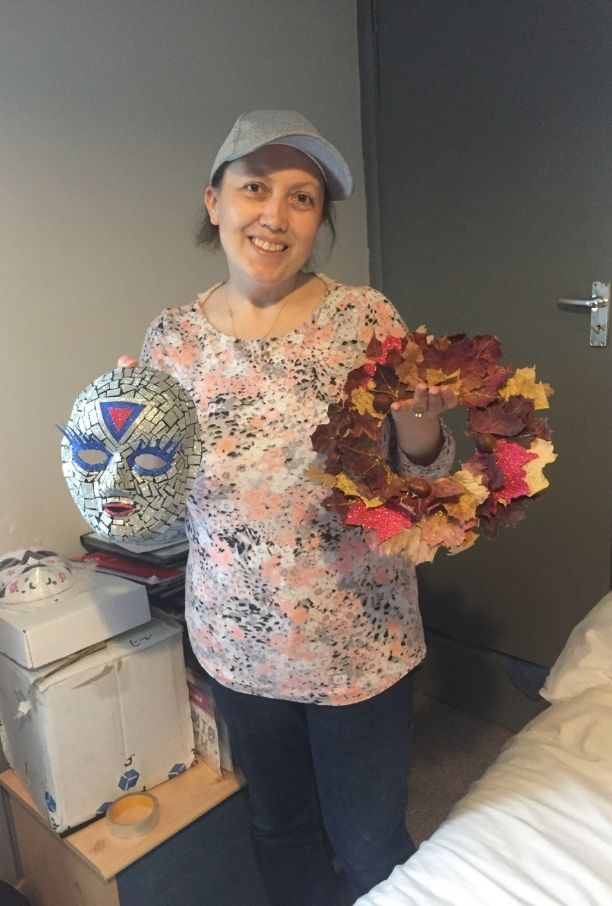 My tumour was a malignant medullablastoma that was a PNET - a primordial disease most commonly found in children. The tumour was at the base of my brain and the top of my spinal cord. Thankfully the consultant managed to get all of the tumour out.

But my treatment wasn’t over. My consultant referred me to Velindre Cancer Centre where I went through 33 days of radiotherapy and six months of weekly chemo. My first emotion was anger at the fact this happened to me, then frustration at not being able to do what I wanted to do, then complaisance as I just ghosted through three months, then I experienced defiance and drive. I got myself back on track with the help of my support bubble, my fiancée Martyn, my mum, dad, nan, siblings, physiotherapist, hydrotherapy, speech and language therapy.

It was exhausting, I don’t want to lie. But after a little time, I started doing things for myself. I’ve joined art clubs and that has bought my creative side out of me. I do tricycle cycling every week as I was an avid cyclist. I sing in a choir; I’ve met new people.

I embraced the new me, because if it wasn’t for my past, I wouldn’t be where I am today.

It’s been four years since my diagnosis, yes it stays with me and there’s not a day that goes by where I don’t think about it. Yes, it sometimes makes me angry when I think about my mobility and what I’ve lost, but I’ve gained a social life and my creative side, that’s something that I’m taking away from my situation.