Marco Gambi was the production manager of a catering company working long hours, managing a dozen chefs and sending out thousands of food orders to numerous destinations every day.

But after a devastating motorcycle accident, Marco was left with a brain injury which severely affected his ability to do his job.

A year after the accident he returned to work but was unable to cope with the high pressure environment.

Marco realised he needed a new career, and discovered his passion for volunteering.

He started supporting brain injury survivors at Headway Swindon, the same group that helped him, and continues to help him, with his rehabilitation.

He said: "I just want to help these people. I have been down that road.

Volunteering gives me a job satisfaction I have never had before.

When Marco was involved in his crash, doctors had to place him in an induced coma and drill into his head to relieve the build up of pressure on his brain.

He had multiple fractures and needed a stent inserted into the main artery that led to his heart.

But when he woke up from his coma, he couldn't understand why he was in hospital.

He said: "I kept trying to escape the hospital for the first three or four days. I felt fine and just wanted to go home.

"I didn't know where I was, it was very confusing for me."

After eight days Marco was allowed out of intensive care, but even being reunited with his girlfriend, Dawn, was too much for him.

She would make the 90 minute round trip to visit Marco in hospital, only for him to turn her away after 10 minutes because he felt overwhelmed.

Gradually, Marco began to improve and felt safe in the hospital.

But once he left, readjusting to life at home proved one of the hardest part of his recovery.

He said: "You go home and feel that you're not ready to go back into the real world.

"I remember sitting down for dinner and having a panic attack. I had to walk around the block for an hour to try and take in everything that was happening. 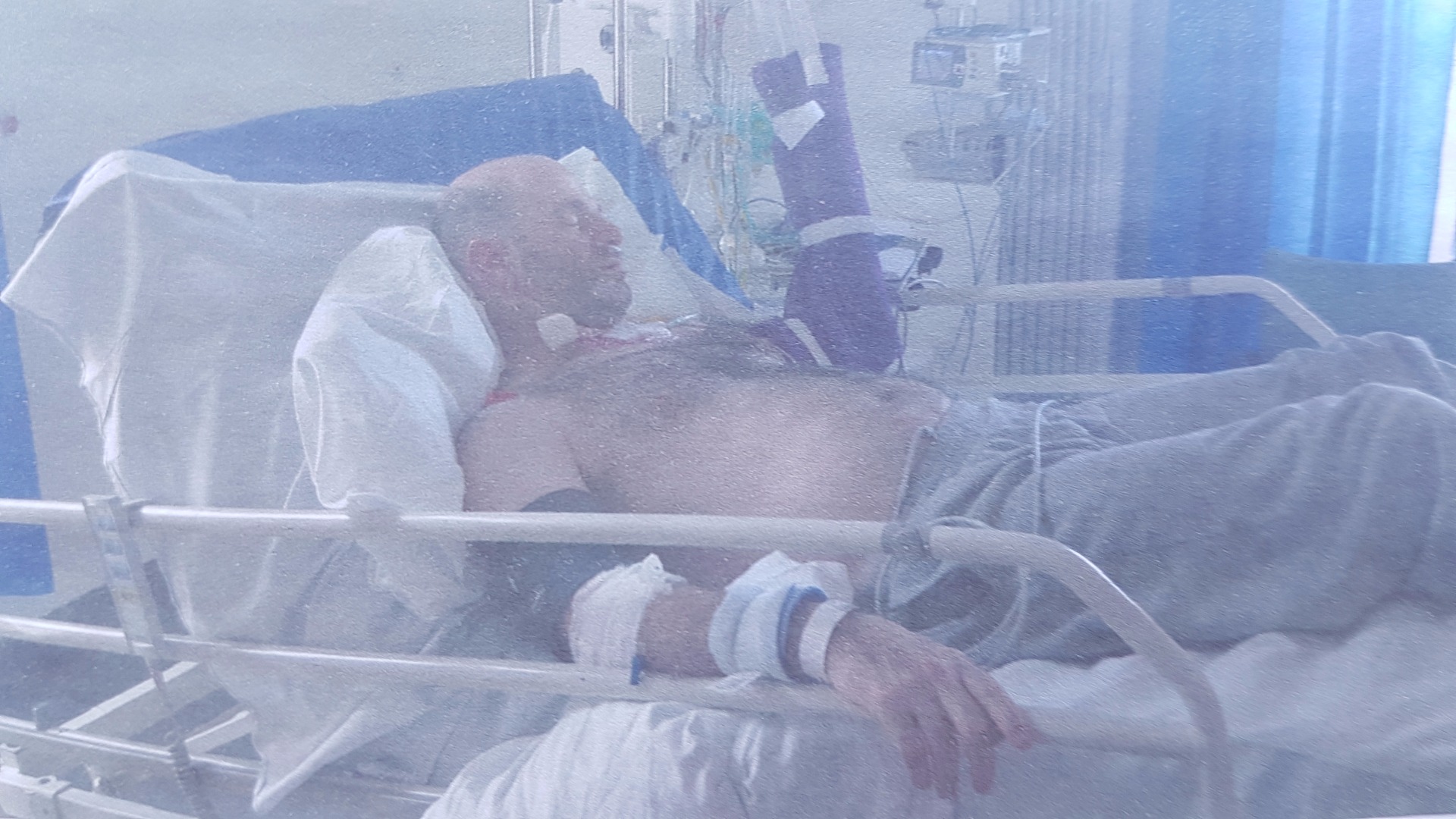 Marco in his hospital bed following the crash

"I would go to bed and just lie there for 12 hours because that was my comfort zone in hospital."

Marco wasn't the only one who struggled to cope with his brain injury; Dawn and her teenage son Ethan had to get used to a new Marco.

He said: "Dawn felt like she was walking on eggshells, she didn't know how I would be from moment to moment.

"She saw the man she loved completely change overnight.

"Even now when I'm tired or I've had a bad day I won't speak to her because I know it won't help.

"It really is difficult at times."

He said: "After I spent a day at Headway I would need two days off. Trying new things gave me horrendous headaches and the sessions would leave me exhausted.

But I knew by going to Headway I was getting better. 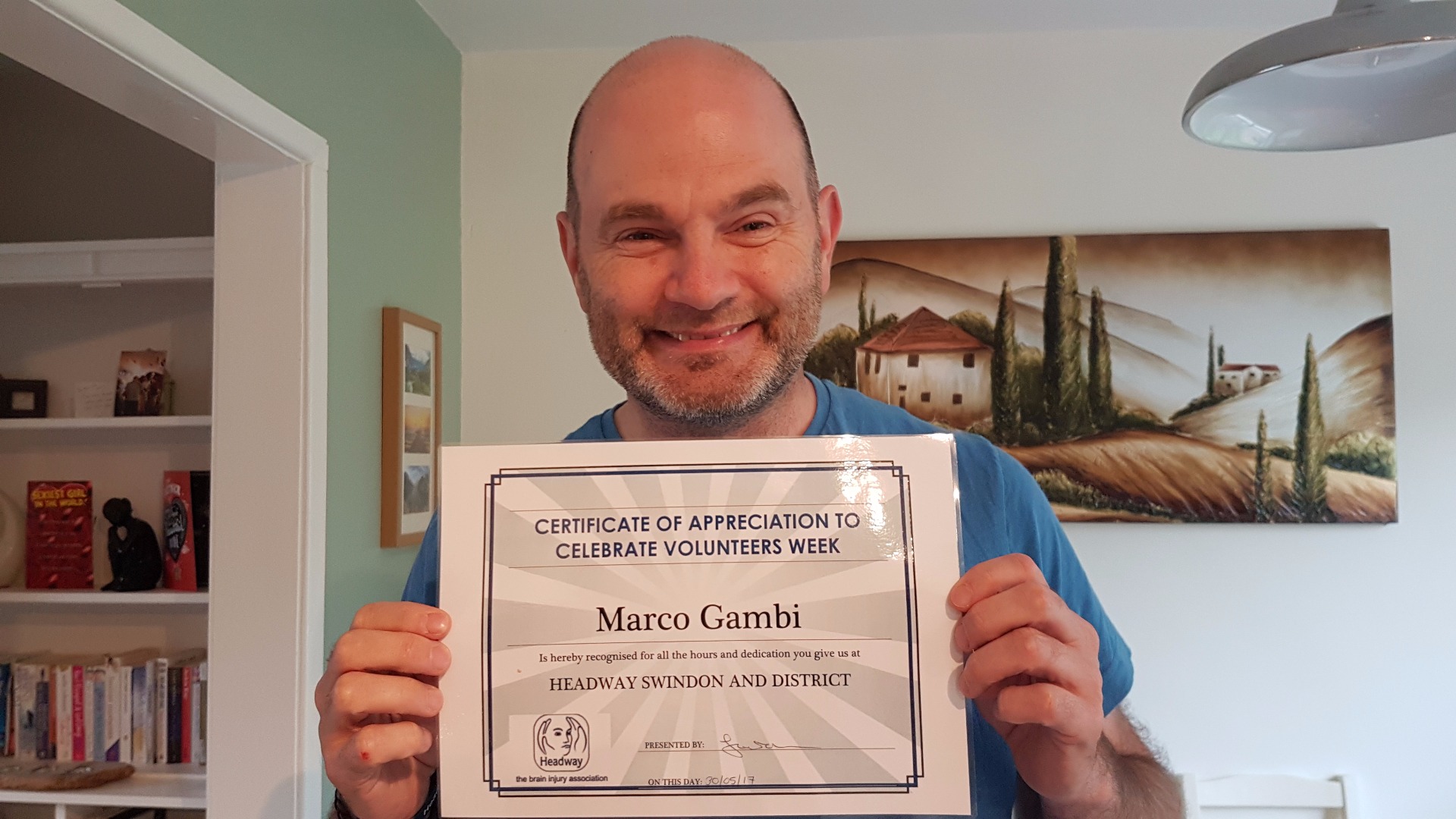 Marco was awarded for his volunteering with Headway Swindon

"Everything was 100 miles an hour but now I've learnt to manage my fatigue.

"I'm more controlling than I was before my accident and the next thing I'm going to work on is letting things go."

Marco went back to work in September 2016, but the following February, he came to an agreement his employers that he would leave.

Marco has no desire to return to the catering industry and instead wants to spend the rest of his life helping brain injury survivors like himself.

"When I help people they have this beautiful smile on their face and they thank me for all my help. That means everything to me because I know how difficult it is for them.

I know now this is what I was put on this planet to do, to help people. Even if it's just making cups of tea.