When Birmingham City youth player Jack Rutter was attacked outside a Gloucester nightclub in 2009, the then 18 year old was left with a traumatic brain injury that brought his career goal of becoming a professional footballer to an abrupt end.

But while his dreams of being a professional footballer had been cruelly dashed, sporting glory would not elude him.

“I thought I’d be alright and could get back on the field. When it became clear that I’d never be the same again – that was when the reality of brain injury really hit me.”

Many people who sustain brain injuries will resonate with Jack’s thoughts and understand the challenge of having to accept the life they once led is gone. For Jack, this meant having to say goodbye to his hopes of becoming a professional footballer.

Jack had been on the verge of signing a professional contract with Birmingham City when, in the early hours of 22 March 2009, he fell victim to an unprovoked attack on a night out with friends.

Jack was punched in the head and fell to the ground, striking his head on the kerb. Just one punch – one moment of senseless violence – changed Jack’s life forever. His attacker was jailed for one year.

Jack spent two weeks in a coma in intensive care at Bristol’s Frenchay Hospital before the terrible reality of his brain injury gradually began to sink in.

“Everything I’d worked towards had been wiped away,” Jack recalled. “For the first 48 hours after the attack it was touch-and-go whether or not I survived.

“Even when I regained consciousness and was finally well enough to leave the hospital, I was exhausted and my balance and co-ordination were all over the place. For weeks, I would sleep for 20 hours each day and couldn’t walk straight.

My darkest days were filled with depression and anxiety. I just thought ‘What are my options going to be?’ 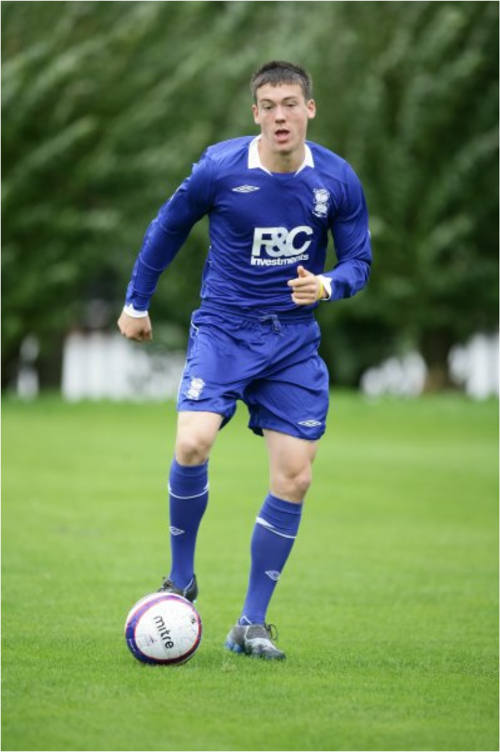 Jack relearned how to play football after his brain injury

A key moment for Jack was when Headway Gloucestershire’s Hilary Osborne visited his house shortly after his discharge from hospital.

“Up until this point, no one had actually told me what ‘brain injury’ could really mean,” Jack continued. “Once I was discharged back into the world, I had no idea what was going to happen.

“Hilary spent time helping me understand my condition. Her whole manner and the way she spoke so sensitively made me feel confident I was being supported after brain injury.

“This was my first interaction with Headway and my positive impression of the charity has continued the more I’ve gotten to see the work it does across the UK.”

Managing the pressures of life after brain injury proved very hard. I quit university and began drinking too much. Anger and fatigue took over for a while.

“When I was younger, my ‘Plan B’ if I didn’t make it as a footballer was to become a policeman. Even my ‘Plan B’ had gone. While my friends were doing well at football or university, I was paralysed by the anger inside of me.”

Jack had first been spotted by a football scout when he was just 10 years old and playing for Windsor Drive, a Gloucester boys’ team. After excelling with St Andrew’s Academy and later relocating to Kings Norton, near Birmingham, Jack joined Birmingham City as a youth team player.

“It was a brilliant time,” said Jack. “It’s a great, great club. I was definitely on course to become a professional footballer. It’s hard to say what level I might have managed if it hadn’t been for my brain injury – the Championship was probably my level. In many ways it was a real shame the way it turned out.”

“I had moved to Nottingham and was still in a dark place when my mum decided to call the local Headway group for some advice and a supportive chat,” said Jack.

“Not only did Headway Nottingham’s team provide her with a confidential listening ear, but they also helped me learn to manage my anger problems and, for the next five years, gave us confidence that support was there when we needed it.”

Headway Nottingham also put Jack in touch with the East Midlands Cerebral Palsy football team, which accepts players with other neurological conditions. Jack’s passion and drive returned and he soon learned to adapt to playing football with poor balance and deafness in one ear.

Jack was back. His football pedigree began to get noticed, along with his natural leadership skills, and he was soon invited for a trial with England. 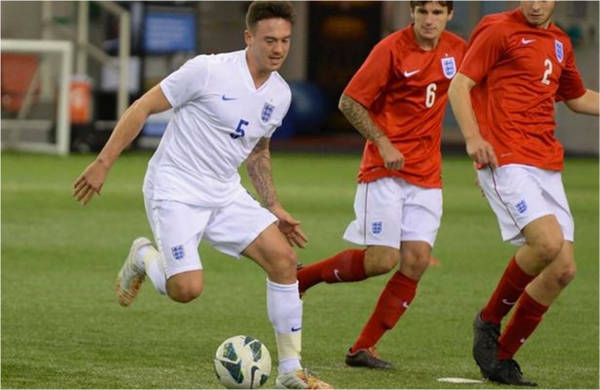 Jack in action for the England senior squad

Jack currently has 14 England caps to his name – nine of them as captain – and represented his country in the European Championships in Portugal, as well as the Cerebral Palsy World Championships, where the side finished fifth.

Through sheer guts and determination, Jack has established himself as one of the country’s top disability footballers. And in 2016, he was rewarded with the ultimate honour of captaining the Paralympics GB seven-a-side football team in the Paralympic Games in Rio.

“I was over the moon to be able to attend the Games as captain,” said Jack.

“The 14-strong squad is ranked eighth in the world and we have the best players from across the UK,” said Jack. “My mum and sister flew over to watch, which was great for them to see what I’m now able to achieve following years of hard work after my brain injury.”

Jack even became a poster boy for Channel 4’s Paralympics film coverage, which showed his journey to the Paralympics following the assault.

“I hope my story can help other young people with rage inside of them to move through their difficulties. I also want to raise awareness of how, if you resort to violence, life-changing brain injury can be the result.”

I'm not finished yet

In December, Jack was invited onto the stage at The Dorchester Hotel during Headway’s Annual Awards luncheon to share his long and arduous journey to Rio.

Interviewed by Sky News presenter and event host Tom Macleod, Jack moved the audience to tears while also providing a few laughs and impressing guests with footage from the Games.

“At the beginning of the interview, I was struggling to breathe from nerves and it took me back to the early days of recovery when I’d wonder ‘can I do this?’

“Tom put me immediately at ease and the reaction of support from the audience was overwhelming. To share my story, thank the charity and see the phenomenal achievements and journeys of others affected by brain injury was such an important moment for me – I’ve never been so emotional.”

With the World Cup season in Argentina just around the corner Jack is training hard, though he still finds time to squeeze in school visits to deliver talks and raise awareness of brain injury.

“My outlook now is that my brain injury happened for a reason,” said Jack. “Before brain injury, I would never have dreamed I’d be on that stage or speaking in schools to help educate children about head injuries.

“Unlike so many people who are still struggling to function years after their brain injury, I’ve been lucky to be able to recapture my passion and sports abilities. It’s my duty to make the most of all the new opportunities that are open to me now.”

And Jack has no plans of slowing down any time soon.

He concluded: “My journey has resulted in me believing that I can overcome life’s challenges. And I’m not finished yet.

The plan is to keep going on this positive streak and enjoy every opportunity that comes along because I now know there can be a great life after brain injury. You’ve just got to believe in yourself.