Kathryn Edgington, 37 and from Stafford, first met her close friend Marie Marsden 18 months ago when she knocked on her door as an Avon sales representative. The duo soon realised they shared common interests and a sense of humour and quickly became good friends.

When Marie was involved in a car accident and was left with a life-changing traumatic brain injury in July 2014, Kathryn did not hesitate to become her best friend's carer and lifeline.

"Even when Marie was finally well enough to return home, her brain injury had an enormous impact on her ability to carry out basic daily tasks," Kathryn recalled.

"In particular, Marie's brain injury significantly affected her ability to manage emotions, making her frequently anxious. Marie went from being an outgoing and sociable person, who worked and ran a house, to someone who struggled to cope with social situations and was often scared of people and going outside."

Despite having a full-time job in finance and a young family of her own, Kathryn soon adopted a key role in Marie's life. At first, Kathryn would arrange the occasional appointment for Marie and later began to willingly juggle – and still juggles today – her own life commitments to ensure Marie receives the correct support, medication and regular GP appointments.

Kathryn continued: "I soon took a lead role with organising Marie's care by providing ongoing practical and mental support for Marie and also her husband and children throughout their most emotionally difficult times.

"While Marie's partner, Brian, quickly became his loved one's primary carer, I was – and still am – very happy to act as a reliable intermediary between him, support workers and medical staff on a weekly basis. This meant that Brian did not have to give up his job and can continue to provide for the family, which is crucial to maintaining a sense of stability amidst the emotional strain a brain injury can cause."

'I became a recluse'

Sadly, more challenges lay ahead for Marie. In March 2015, Marie suffered the symptoms of a stroke while on the phone to Kathryn. Recognising that her friend was unwell, Kathryn hung up and immediately came to the rescue.

"Within minutes Kathryn was pulling up outside my house with a rapid response team," said Marie, who now receives ongoing support from local brain injury charity Headway South Staffordshire.

"When it became clear that I needed to be rushed to hospital in an ambulance, Kathryn contacted my partner, arranged childcare for my daughter and even picked her up from school to explain the situation.

"Following my brain injury I became a recluse. My teenage daughter was very distressed by the change in my behaviour as I was – and still can be – uncharacteristically volatile and emotional at times as a result of my brain injury.

"Kathryn saved me by becoming a huge part of my family's lives. Her heart knows no bounds.

"There are times when Kathryn even puts me before her own family. Even now she travels from the other side of town to care for me three to four times a week, takes me to support sessions at Headway South Staffordshire, collects me and considerately manages my emotional outbursts. She never lets me down, she is one in a million and I simply love her." 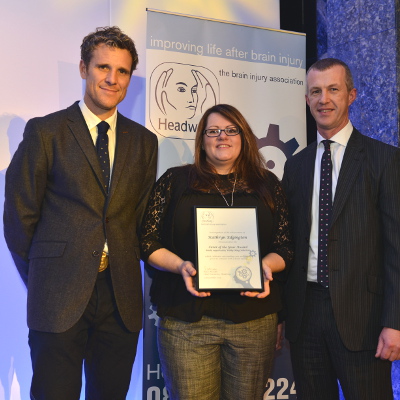 Kathryn collects her Headway Carer of the Year Award

Carer of the Year

In December, Marie nominated her best friend for a national Carer of the Year award to thank Kathryn for her ongoing care and support after brain injury.

"I don't feel as though I deserve such incredible recognition for simply supporting and carrying out the daily appointments for someone I care deeply about.

"Marie is my good friend and, though I had only known her for nine months when she sustained her brain injury, it doesn’t seem like much to call her regularly to make sure that she always knows there is someone on hand to help her if she needs assistance.

The support she receives from Headway South Staffordshire is so important to giving her the best chance of living a fuller life after brain injury as it offers a safe space for her to meet with other people with similar life challenges and experiences.