When Giles Hudson sustained a brain injury in a horrific car crash at 19, there was no local support network to help him through his recovery.

Determined to help their son, Giles' parents were encouraged to get in touch with Headway.

32 years later, Giles is following in his parents' footsteps by supporting brain injury survivors across the North East of England.

Before his brain injury, Giles was living with his parents and his brother in Yarm, North Yorkshire.

He was in his fourth and final year of an apprenticeship, and had even been named apprentice of the year.

"I had a well-balanced social life with friends and activities," said Giles. "I loved cycling, skiing, skating and ice hockey.

"I was a valued member of my friendship group, even though my friends were already at university while I was doing my apprenticeship. They always congregated at my house when they were home from university." 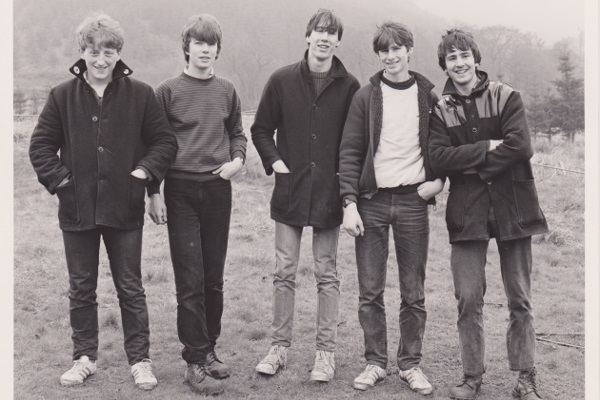 Giles with his apprenticeship colleagues in 1983. 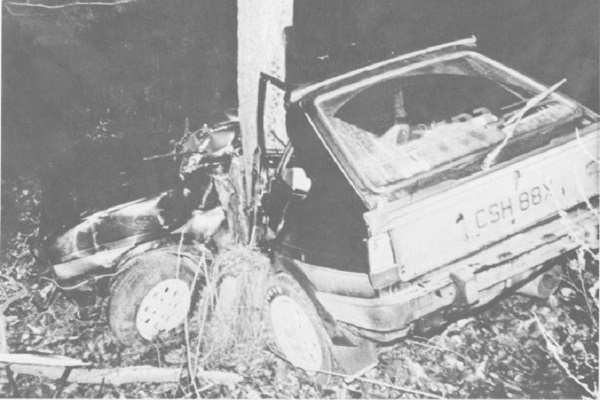 Firefighters were shocked to find Giles and his friend alive.

On 18 December, 1985, a friend persuaded Giles to take him out and cheer him up after being dumped by his girlfriend.

Shortly before midnight, as Giles drove his friend home along a series of 'S' bends, a vehicle appeared on his side of the road.

Trying to avoid the vehicle, I was forced into an anticlockwise spin. My car hit a tree side on, wrapping itself around it, leaving me in a coma.

Giles' pelvis was broken in two places, he had fractures of the spine and was paralysed from the waist down.

Fire-fighters cut him free from the wreckage and rushed him to Middlesbrough General Hospital, now known as James Cook University Hospital.

Giles had hypoxia and severe bruising on his brain and was given just a 25% chance of surviving the night.

On 2 January, a CT scan revealed Giles had a subdural collection, an "old" collection of blood between the skull and the surface of the brain.

The next day, Giles had an operation to remove the blood, but after the surgery his condition deteriorated further. 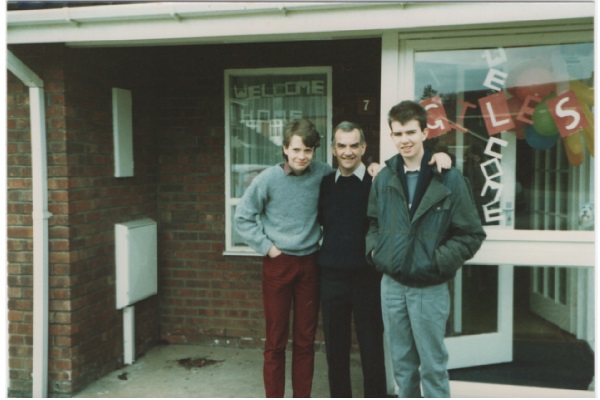 This time, doctors found a build up of fluid on Giles’ brain, known as a subdural hygroma, which had to be drained.

Giles spent three months in a coma, and the next six months struggling with post-traumatic amnesia; although he was conscious and awake, he would behave oddly, and could not form memories.

Every hour of every day was hard work for Giles. He had to relearn almost every single one of his life skills including walking, talking, eating and going to the toilet.

"I had severe dysphasia, and would go off on long tangents with no coherence," he said. "My balance was terrible. My memory and concentration span lasted just seconds."

Throughout it all, Giles's parents were always there for him. But immediately after his injury, Giles was unable to recognise objects, places or people, including his mum Gwen.

When mum visited me I didn’t know her at all, but I was happy that she was with me. I didn't recognise her until two weeks before I was discharged.

"Mum walked into the ward and I raised my hand and called 'Hi Mum.' She just broke down and cried."

While Giles was recovering in hospital, his parents, hospital staff and carers formed a group that met once a month to support brain injury survivors and their families. 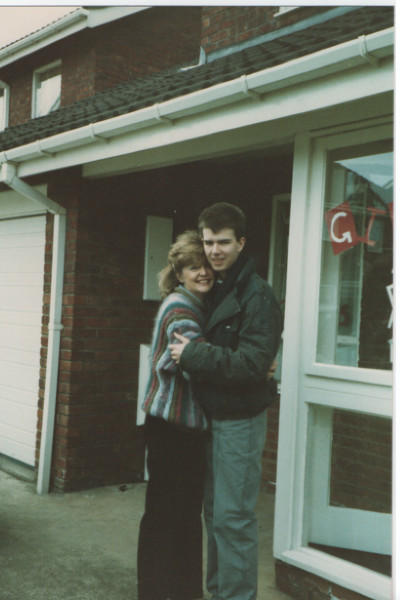 When he came out of his coma, Giles didn't recognise his mum, Gwen.

"At first it was just survivors and their parents chatting and sharing their experiences," said Gwen. "We thought about who we wanted to speak to, such as doctors and solicitors, then we reached out to them for advice.

"Survivors and their families living in the area started to attend. They had been all on their own, not knowing what to do. When they came to our group they could share tips and our experiences. The patients could talk to each other and get strength from each other."

Although Giles has very vague memories of his time at the meetings, he remembers the positive feeling they gave him.

"I attended all of the meetings, which helped me greatly as I was able to communicate with others affected by brain injury," he said. "I can't remember much from those meetings, but I remember feeling safe and comfortable.

I'm really grateful to my parents for doing all they could to support me. By helping to set up the Headway group, they made such a difference not only to my recovery, but other brain injury survivors and their families in the area.

Over time, Giles and Gwen stepped away from Headway as they focused on his recovery and return to work.

It wasn't until 27 years later that a chance encounter saw Giles invited to attend Headway Teesside, the reincarnation of the group his parents helped to start all those years ago.

Although he hadn't been back for more than a decade, Giles felt right at home.

Going back to Headway was like walking into a room with people you have a connection with. They take you for who you are. When I'm out I'm always on my guard, but at Headway I feel at ease.

After giving an inspirational speech to the group about his own recovery, Giles was invited by Headway - the brain injury association to chair a new group, Headway Darlington and District.

"Headway opened that door for me," he said. "I was over the moon. It was hard work but it was so rewarding to help other people overcome the same challenges I had faced.

"It was about putting people in that safe and comforting environment I had benefitted from and helping them move in the right direction."

At the same time, Giles was working for a private company developing services to support people with a brain injury, their families and carers. At the end of the year, it became clear the company would not continue the project. 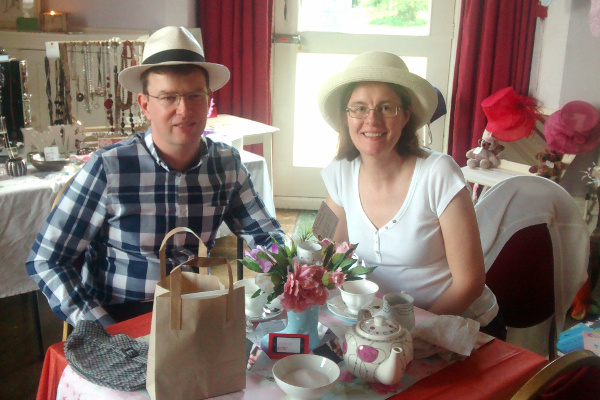 Giles and his wife Helen at the Headway Darlington and District Tea Party 2015. 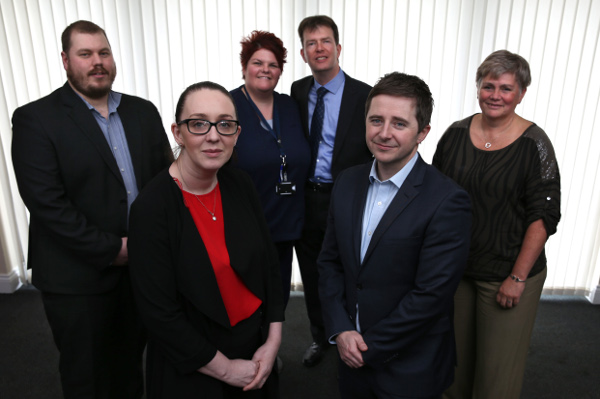 "I had built a connection with the members, and provided them with support. Up until then, they'd been completely on their own. I couldn't just let them down," said Giles.

After a lot of hard work, the group was saved and became Headway Hartlepool, which Giles helped to run for the first few months.

In July 2014, after 18 months at Headway Darlington and District, Giles had to step down as chair when his wife became unwell.

But later that year he was invited to join Headway's Forces Support Group as a committee member, where he still volunteers today.

The group offers a range of support services to brain injured forces personnel and veterans and their families across North Yorkshire and the North East of England.

It aims to break down stigma surrounding servicemen and women asking for help and support by providing a safe space for people to share their experiences with others from military backgrounds.

"I was thrilled when another opportunity to support Headway came up, because I still wanted to give something back."

When I was facing challenges after brain injury I was lucky to have the support of my loved ones. I don't want anyone else to have to face those challenges on their own, which is why it's important that Headway is there. 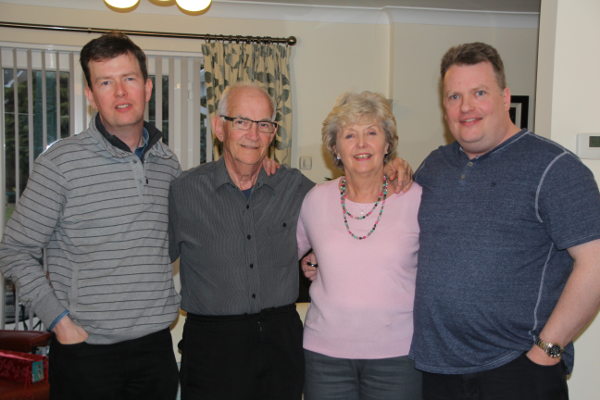 Giles with his dad Ron, his mum Gwen and his brother Brent.

Post-traumatic amnesia (PTA) is the time after a period of unconsciousness when the injured person is conscious and awake, but is behaving or talking in a bizarre or uncharacteristic manner.