After sustaining a bleed on the brain following a clash in a game of football, Pauline O’Connor started to experience dizziness, fatigue and headaches. These symptoms affected her life dramatically but also led to the discovery of a newfound talent and love for writing.

Pauline, 40, never anticipated that playing her beloved sport of football would have such long-term consequences. “It was a bright and sunny afternoon, a perfect afternoon for football. I was playing centre-back and jumping for a header when the striker leapt into me in a late tackle. We were both airborne when her shoulder smashed into my face”, said Pauline.

Pauline played out the game thinking she had just received a bloody nose and would be fine. But 36 hours later she woke with a painful headache, dizziness and fatigue and became worried.

“I was never hospitalised, only an outpatient. Because my injuries were diagnosed as concussion initially, it took 10 months to be seen by a specialised brain clinic”, she said.

“I was on a treadmill of seeing the GP to be signed off work, trying again, collapsing and going to the GP again. My social life disappeared as did my ability to do daily tasks.

It took 15 months and numerous scans to find the bleed in the back of my brain.

The Headway helpline proved invaluable for Pauline. She said: “Headway were my main source of information and advice in the first year of my recovery because it took so long for the seriousness of my injury to become apparent.

“My initial call to the Headway helpline was the first time I spoke with someone who had in-depth knowledge of brain injury and the struggle many survivors face every day.”

The hidden effects of her brain injury have plagued Pauline since she sustained her injury seven years ago. She said: “I thought that dizziness was the symptom which affected my life the most. For the first year I was constantly dizzy.

“What I didn’t realise was how important fatigue was. It was exacerbating my dizziness, and all my other symptoms, but I simply didn’t realise the fatigue was there at all. It is possible to be dizzy or fatigued after brain injury without being aware that they are affecting you.”

Pauline slowly started to feel better and began attending sessions at Headway North London, which sparked an interest in writing.

“One of the sessions we ran was a writing class which encouraged me to develop my writing and eventually led to my new career of being an author”, said Pauline.

Pauline wanted to document her life living with brain injury and has subsequently published a book about her experience. She also wants to continue to give back after the care she received so is becoming more involved in NHS engagement and research programmes.

“If I could give others living with brain injury one piece of advice it is: be patient with yourself.

A brain injury can be terrifying and frustrating and invisible all at the same time. You might need to take a step back from what you are doing to see what is actually affecting you or causing the problem.

You can find more information and purchase Pauline’s book Living with Mild Brain Injury The Difficulties of Diagnosis and Recovery from Post-Concussion Syndrome on routledge.com. 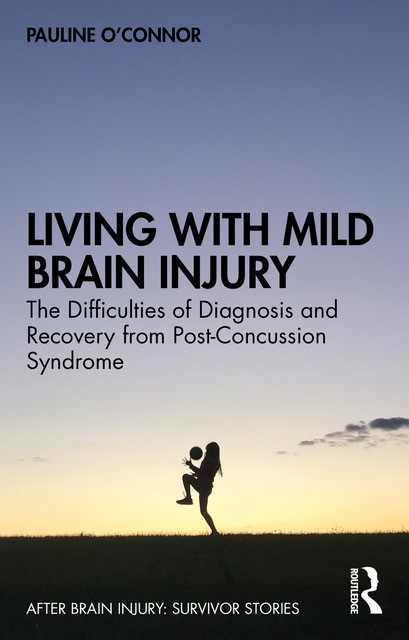