Liz shares this powerful account of adapting to brain injury alongside fellow brain injury survivor Helen. The two friends bonded over the shared experience of their lives being deeply affected by the ongoing effects of their injuries.

I can't remember the first time I ran into Helen, but we were both pregnant at the time. Our paths would cross in a pre-natal group here, or a feeding class there.

Helen is tall, with a curtain of stunning auburn hair. She always had her husband with her. She asked his advice a lot. Even about little things, such as whether she would be at next weeks' toddler session.

My husband, by contrast, was often out of the country. He took over child-care when he came home, so that I could work as a vet.

For rare periods, I both vetted and child-cared; on my days off, I would find outdoor spaces to tire the kids out so that they would sleep. Baby-groups sometimes; parks sometimes; exploring museums; paddling in rivers. I was completely unscheduled but did minimal housework and went through swathes of time too embarrassed to ask people round to our house.

Helen was a 'proper Mum,' a home-maker, and one of the friendliest people I knew. She'd always stop to talk, although sometimes mid-conversation she'd remember that she had somewhere else to go. Other times, she'd break off to worry about things like what times the bus ran.

I had a car, but I used to walk everywhere anyway. Helen said, didn't I feel vulnerable walking home? But frankly – and here was my privilege – I didn't.

We were both pleased when our eyes met across the playground on our daughter's first day at school. A group of us went for coffee together. Helen, I learned, had had an accident at the age of eleven: she'd been 'knocked down.' It made for quite an interesting story, but I still didn't think very much about it.

Fast-forward until our eldest were seven; my youngest was just starting school and Helen's youngest was a toddler. I had just had the diabetic hypo that had devastated my short-term (and part of my longer-term) memory. Overnight, I'd gone from being a busy professional vet to feeling like a burden.

The sight of my own Toddler at school, in a uniform, blew my mind: how was he old enough? Lots of other parents stopped to ask how I was; they all seemed vaguely familiar but I couldn't place them. Apparently, that's because the part of the brain that flags up a 'familiar person' is different to the part that can actually recognize folk.

I recognized Helen; I'd known her for that little bit longer than most of the Mums. And Helen, thank God, wasn't “sure I'd feel better soon.” Instead, she asked something strange but actually very useful.

She said: 'How does it affect you?' I told her: my short-term memory was useless. But then she said, 'I know what that's like.' I was indignant: how could she? This was a brain injury. I wasn't just a bit distracted by my monthlies! I explained, a little bit irate, that this was bigger and different. That's when Helen reminded my gently about her being 'Knocked Down' as a child.

She'd been crossing the road to get the school bus. There was a car behind the bus and which moved out and overtook it. Helen's twin was crossing slightly ahead, so she pulled him back. 'He got a fracture to his right elbow,' she says. 'And I got thrown fifteen yards.'

Helen had been living with short-term memory loss for years. Now that she'd said it, I could recognise the patterns; the slight hesitancy when asked about her plans for the day; the way she often turned to her husband.

Helen's injury happened at the start of secondary school. 'For anyone, she told me, 'starting secondary school would be a big day. New school, new uniform – but I was a whole new person. My memory was awful. Different subjects on different days; no desk to put your things in. I work well from visual memory, so getting around was okay. But if I was doing a reading comprehension, I couldn't pull things out of what I'd just read.

I was bullied a lot. It was hard.' It must have been. I was barely coping as an adult.

Back when I was applying for vet-school, Helen – who is at least as intelligent as me - was locked into a cycle of repeated courses which would never become a career, the idea being simply 'to justify the benefits.'

As a teenager and a young adult, Helen was also startlingly vulnerable. She was mugged; she was attacked in a bar; she went through something that, from a post-'Me Too' perspective, was rape. 'It was difficult,' she tells me now. 'They decided I was an unreliable witness.'

Neurological rehabilitation taught her how to 'avoid compromising situations' as well as other basic life-skills. Helen was in a documentary called Put Me Together Again, which was made at the end of that rehabilitation course; an undercover actor was used to see how she'd cope with being chatted up by a pushy man in a bar.

As an adult, unlike teenaged Helen, I'm hyper-aware of my vulnerability. I even find it hard to trust the staff in banks with my information. When my favourite necklace came loose on an early transfer between hospitals, I wouldn't give it to the ambulance driver to look after. I knew that I wouldn't remember to ask for it back; instead, I put it down in some service-station toilets and lost it. 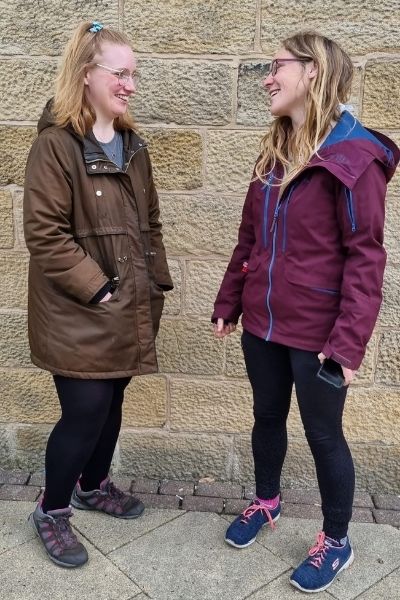 I had rehabilitation too, with a psychologist who also treats Helen. I didn't like him changing my life, even though I was always confused. The only way, he said, to stop me from losing things (and to stop me from turning up in the wrong place and on the wrong day and stop me arguing constantly with my children because I can't remember what I promised them), was to introduce better routines.

Even now, having followed his advice, routines are my nemesis. What eleven-year-old Helen accepted and benefited from, I raged against. Johnny's job must be frustrating; convincing people like me to buy their independence by following rules. But it works – there's the thing – and I'm going back to see him again in the not-too distant future. It's hard to be feel fully independent if you constantly mislay your bank-card and hard to exert boundaries with your kids when you forget what was agreed the previous day.

Helen accepted some help with childcare routines and her kids are absolutely thriving. After her second baby, she became one of the few people I have known to also change her diet - and lose and keep off several extra stone of weight. Helen has been making deliberate changes to her routine and sticking to them throughout her adult life - she was well set up for weight-loss. Helen is proud of how she looks and more importantly, feels fulfilled and empowered in life. She has a voluntary job in a charity shop. She has made lots of friends through her kids.

Sometimes in a melancholy moment, I find myself wondering: is it better to have loved and lost a busy professional life or never to have had it? But we both know that 'what ifs' are not helpful.

We're both very proud to watch the other one growing – me coming to terms with my new brain, Helen developing hers. We're proud of Sheffield's fabulous neurological rehab team and have joined Brains of Somewhere, the local patient-led brain-injury group.

We talk about ways of remembering things, like keeping our keys on a string. We exchange perspective on issues and stories about getting confused; even the simple little things like being in a cafe and accidentally picking up someone else's drink.

We don't really know what it's like to be the other brain injury sufferers – neurological problems tend to be unique – but we can come closer than people with fully operational brains.

We do have lots of challenges in common and what's really nice, is to have people to talk to who (almost) know what it's like.