Mother-of-two Sarah McKinlay was three months pregnant with her first child when her husband, army veteran Warren, was involved in a motorbike accident that left him with a life-changing traumatic brain injury and turned their lives upside down.

"On the 23 May 2005, I had been at work all day and was waiting for Warren to come home so we could have dinner together," Sarah recalled.

"It was around 6pm, and I remember watching Eastenders and thinking it was getting late so I grabbed a bag of crisps while I waited.

"There was a knock at the door. It was one of Warren's army friends coming to tell me that there had been an accident but Warren was okay and they had taken him to hospital to get checked over. A couple of minutes later there was a paramedic at my door confirming that Warren motorbike had hit a tree and to make my way over to the hospital when I was ready."

Warren, then 23, had been taken to a hospital in Norfolk and Sarah calmly made the 50-minute drive from their home in Stanton, Suffolk, to be with her husband.

"When I arrived at the hospital I was ushered into a side-room," said Sarah. "No-one would tell me what was going on and it was 15 minutes before anyone came to see me. I had expected to arrive at the hospital to pick up Warren and bring him home. However, it was becoming clear that Warren's injuries were much more serious than I'd first thought and I began to panic.

"When the doctors finally allowed me to see Warren, it was a relief to see him conscious. He held my hand and said my name but was making very peculiar noises."

"That night, Warren was moved to the high dependency ward at Norfolk and Norwich University Hospital where I was allowed to stay with him for the next 24 hours," Sarah continued.

"I tried sleeping on a little chair but I was tossing and turning all night with worry. That day will stay with me for the rest of my life. The next day, the doctors told me that Warren needed surgery as he had broken his pelvis. He had also broken his back and suffered ruptured lungs."

"No one mentioned brain injury. The medical team was so concerned about fixing Warren's physical injuries that his hidden traumatic brain injury was entirely overlooked."

Warren stayed at Norfolk and Norwich University Hospital to recover for a further four weeks, before finally being moved to West Suffolk Hospital, in Bury St. Edmunds, to begin the next stage of recovery.

"In the early days, he did not communicate with me or his family very well," Sarah continued.

"I was three months pregnant with our first child at the time of Warren's accident, and the move to the West Suffolk Hospital was a relief as the hospital was closer to our home.

"However, Warren was unable to come to either of my scans with me. I was excited to show him my pictures but he didn't seem at all excited and I found it quiet difficult to communicate with him. Going through pregnancy by myself was tough.

"I would visit Warren along with his parents, and we would be sitting with him for more than an hour and he wouldn't say a word to us but, as we left, he would start talking to a stranger on the ward about football straight away. It was quiet frustrating as we had no idea why he was behaving like that.

"When Warren was finally discharged and allowed to return home, my priorities had drastically changed. All my time was spent caring for Warren rather than looking after myself in my final stages of pregnancy. It was a struggle but I was so thankful to have him home."

"Warren was fantastic," Sarah remembered. "He supported me and helped out with our daughter, Katie. I cannot fault him at all. He was incredible.

"However, our problems came later with the long-term implications of being a parent. Warren's brain injury meant that he could not – and still cannot – cope with loud noises. He could not stand the crying of our baby.

"At first I just thought he was adjusting to having a new baby and life after the accident. I had no idea that it was so much more than that. We had only been married two-and-a-half years when Warren's accident occurred, and what should have still been the honeymoon period quickly became something a lot more challenging." 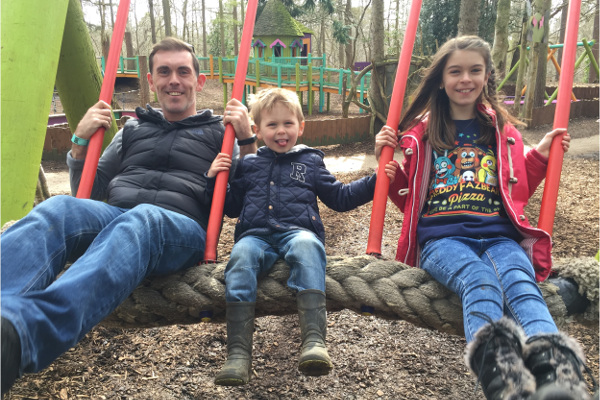 Warren with Frazer and Katie

'I just sat in my car and cried'

It was not until a year after Warren's accident that he was diagnosed with having sustained a traumatic brain injury.

"The army and NHS both seemed to have forgotten us," said Sarah. "We slipped through their nets. We were given the basics by the hospital when discharged, but I needed further supplies to care for Warren. One day, I just sat in my car and cried. I felt completely alone for a long time."

Eventually, Warren was referred to Hedley Court, the Armed Forces Rehabilitation Centre, in Surrey, which supports injured veterans. He was referred because of his physical injuries, and it was only when Warren saw a specialist at the centre that he was diagnosed with having sustained a brain injury.

"At first it was a real shock," Sarah continued. "I told the specialist: 'No, I've been living with him for a year and he's fine – just adjusting to civilian life after the army.' But the puzzle pieces started to come together when we considered the symptoms following Warren's head injury: the anger, the struggle to emotionally connect, the struggle with noises, and memory loss. Everything seemed to click and it just made sense."

In 2006, Warren was medically discharged from the army, which had a significant impact upon his family life.

Sarah said: "We lost our army quarters after Warren left the force, which added to the uprooting of our lives. A very dark three years followed.

"Managing anger became a big problem for Warren. Things in the house would get broken. He turned to drink. All he wanted to do was go out and drink in the pub with his friends.

"I found it difficult to get through to him and his brain injury meant that he struggled to engage and connect with Katie. She saw her daddy's anger outbursts, and little things such as Warren not saying goodbye to Katie when he went out were difficult for a toddler to understand.

"I tried really hard to protect Katie as much as possible from seeing Warren's behaviour, which was successful as she has turned out to be a wonderful and very thoughtful young lady. Warren doesn't remember much of Katie growing up, which I know frustrates him."

The couple were told about Headway Essex, but even then Warren struggled for a long time to accept that he needed brain injury support.

Sarah said: "It was a very long process – the biggest challenge was getting Warren to accept that he needed more support after brain injury.

"When Warren finally started going along to Headway Essex's support sessions, he really benefitted from the social outings as the team helped to build up his confidence in a sober environment with people who understood his life challenges."

Before brain injury, Warren had been a Recovery Mechanic for the army with a dream of becoming a professional racer. In April 2016, he was invited to step up to an endurance car racing team and was given the opportunity to join Team BRIT, a racing team made up of injured veterans. 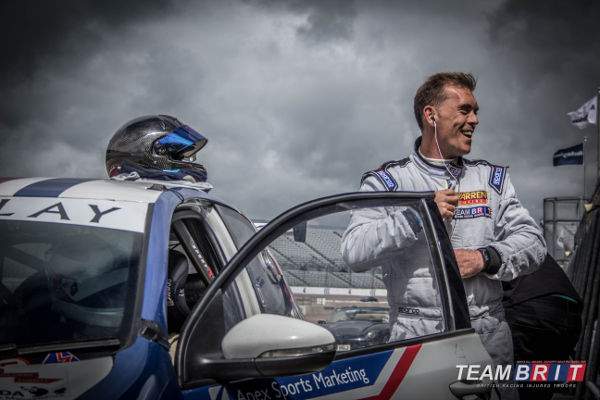 'Joining Team BRIT was the best thing for Warren'

"Watching racing together was always a shared passion between us, and so to see Warren using his love of motorsports to drive forward his rehabilitation was really special.

"When Warren left the army, he deeply missed the army banter and camaraderie. Racing has given him back a real sense of purpose and he is so much happier and determined.

"My husband's passion for life has started to come back – something I thought we'd lost forever. He is doing so well and I am so incredibly proud of him.

"Katie also often says how proud she is of her daddy. She saw him at his lowest, his angriest, and she has seen Warren's transformation over time into a smiling person once again who has rediscovered his passion for racing and bringing back trophies." 'Living proof that helmets save lives'

The couple now also have a four-year-old son, Frazer.

Sarah added: "We were told it was very unlikely Warren would be able to have children again following his injuries. When I fell pregnant with Frazer, we were so happy and Warren has had a chance to experience all the things he missed out on with Katie."

Sarah added: "Warren now has a strong, loving relationship with both Katie and Frazer. It is lovely to see them together.

"Brain injury still affects us on a daily basis. It still makes Warren very tired and he can sleep for long periods of time during the day. We've found ways of dealing with the anger outbursts and memory over the ten years since his accident with help from Headway UK.

"A social worker at Hedley Court once told me a statistic about the high number of marriages that breakdown after brain injury. I remember feeling determined to ensure we would work through it and not become a divorce statistic. Katie needed her daddy and I needed my husband. He did not ask for this to happen to him and we've learnt to adapt our way of life around Warren's head injury.

"Warren now takes his motorcycle helmet into schools and delivers talks to the students about the importance of looking after your head. He uses himself and the broken helmet as living proof of how wearing a helmet can literally save your life.

Yes, Warren sustained a serious brain injury, but his helmet means that he is still with us.