The relationship between a parent and their child is one of the strongest bonds that a person can have in their life, so imagine how you’d feel seeing your child change right in front of your eyes, becoming forgetful, confused and delusional for no apparent reason.

Lyndsey Anderson doesn’t have to imagine this experience – she lived through it for five years as her son Alex battled an undiagnosed health condition.

She said: “My role as a parent took a complete U turn. Me and my husband thought he had grown up and no longer needed us, but he had essentially become a child again.”

Alex had always been a bright student and had a successful future ahead of him as an architect, but after he left university, things began to change for the worst.

“When he came back from university in 2011, he rarely came out of his room,” said Lyndsey. “He was withdrawn and morose and didn’t speak with his friends.

“I thought it was because he didn’t want to look for a job and start ‘grown up’ life but I realise now that he was struggling to cope with everyday decisions.”

Alex began to experience problems with his memory and would easily get confused, something the family put down to a previous diagnosis of type 1 diabetes.

What they didn’t know was that he was actually suffering from epilepsy, which caused frontal lobe damage to his brain as he hit his head on the floor during seizures, and hydrocephalus.

Lyndsey said: “It became clear that his brain was not functioning properly. He began to spend evenings at home sobbing.  At one point we were alerted by the local stationmaster that he had been on the train station platform for two hours and he was worried he was considering suicide.

“In that same time, I was diagnosed with incurable breast cancer so that first year was all about me, rather than Alex.”

Alex thought the stress of an architectural role with long hours and pressure was causing his problems and he decided to change his career options.

Lyndsey said: “He had studied theatre design at art school and enrolled in a one-year Masters course. During this time, his memory and related problems became much worse. His first dissertation was simply babble and made no sense.

“He had his first breakdown because he convinced himself he had written a final dissertation but had deleted it from his computer. He banged his head on the floor for half an hour before we managed to stop him.

Alex would tell me he didn’t recognise me and didn’t know if he was dreaming or not.

“It was a nightmare time and really took its toll on his father, with a sick wife and a son who seemed to have had a complete personality change.”

Alex’s condition continued to deteriorate and he was told it was down to ‘badly managed diabetes’.

Lyndsey said: “The phrase I used the most was “are you the right doctor?” By 2017, we had seen nine consultants and their teams before getting the correct diagnosis.

“Eventually, after a particularly bad psychotic incident in which he believed he had been poisoned, his father took him and crashed the GP’s emergency Saturday morning surgery.

“A sympathetic nurse said it was nothing to do with diabetes and she would recommend an MRI. Fortunately, he had a diabetes clinic a few days later and the consultant, on hearing the tale, said he would expedite the MRI. It showed he had hydrocephalus and generalised epilepsy.”

Over time, Alex, now 31, has made some improvements but is still struggling to come to terms with the effects of his brain injury.

“Now that the existing conditions are being treated and controlled, he has been able to create some sort of quality of life and has turned to illustration as a career choice,” said Lyndsey. 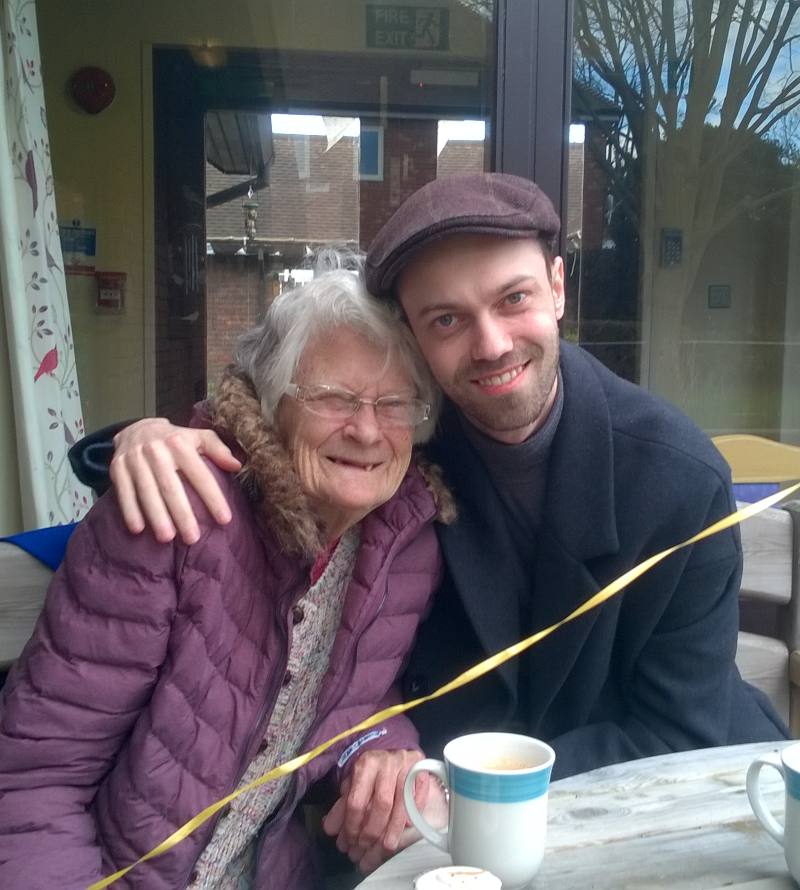 Alex and his gran

“He will never be able to be employed and has been assessed as having a limited capability to work, but he is currently doing a book illustration course at an adult education centre in London and volunteers at a charity shop.

“When people tell me what a charming young man he is, I do feel we’ve come a long way. He was always a little charmer, but for five years things were really tough.

“I’m so proud of Alex, throughout it all he’s rarely complained and is always ready to accept any diagnosis and treatment – even if he can’t necessarily remember who the doctors are or having met them before.

We’ve been through so much as a family, but we’ve stayed strong!