In August 1992, Jeff Mayle, 40 and from Splott, in Cardiff, was just 17 years old when he fell off his skateboard while racing with a friend and hit his head on a concrete pavement.

Although the teen's father was quick to drive him to the Princess of Wales Hospital, in Bridgend, he tragically suffered an extra-dural haematoma while waiting for his x-rays. Jeff was rushed by ambulance to Morriston Hospital where surgeons drained the clot in his brain and saved his life, though he was left with a devastating brain injury.

"I spent six weeks in a coma before finally beginning to show signs of improvement," said Jeff.

"My earliest memory as I slowly regained consciousness was the ambulance journey to Rookwood Rehabilitation Centre, in Cardiff, where I was to spend the next five months of my life relearning basic life skills when I should have been studying for my exams!" 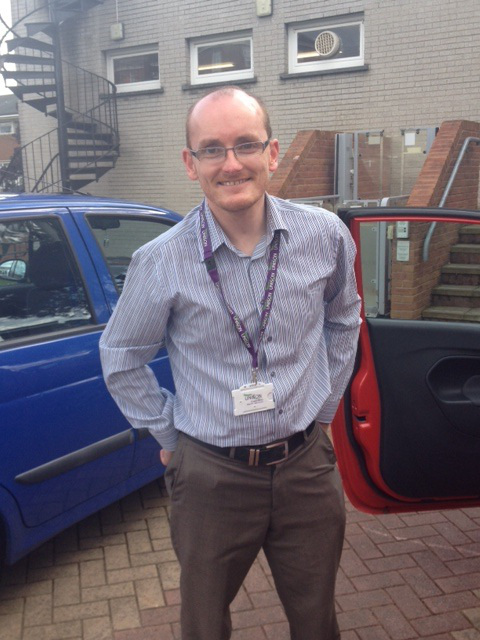 'I was forced to readdress my career aspirations'

Before the accident, Jeff had been studying A-Level Maths, Chemistry and Physics at Llantwit Major Comprehensive with dreams of becoming a Chemical Engineer. While his friends returned to college for a new academic term however, Jeff struggled to process information and was forced to postpone his studies for one year. He received home schooling from a tutor who helped him relearn his previous studies in maths and chemistry, starting with the basic times-tables.

"When I finally began a phased return to school, I soon found that I struggled with work that I'd once completed with relative ease," Jeff continued.

"Mobility problems also meant I could no longer complete laboratory experiments and I was devastated to have to drop Chemistry and Physics. This forced me to readdress my career aspirations.

"Once I had re-mastered the basics, however, I instead managed to graduate with A-levels in Computing Studies and Maths.

"In the face of such adversity, this was a huge achievement for me. I was even more pleased that the hard work paid off and I was granted a place to study a HND in Software Engineering at the University of Glamorgan."

In 1993, Jeff's mother set up a support group with Headway Cardiff to reach out to other local carers and families affected by brain injury. Jeff quickly became an integral part of the support group.

"For a while I enjoyed my independence and lived away from home to work in Birmingham and later Chesterfield after my HND," Jeff recalled.

"Eventually, I decided to return to my hometown in Cardiff and began volunteering and supporting members at Headway Cardiff's weekly sessions alongside working at the then-named University of Wales College Newport, in Caerleon.

"The people we've met and friends I've made at Headway Cardiff have been an irreplaceable support to me. Together we support each other, host events, fundraise, and all work alongside the belief that there can be life after brain injury. We're one big family!"

In 2005, Jeff's outstanding contribution to supporting families in need of support after brain injury was recognised and he was named a trustee for Headway Cardiff.

"Even today, my brain injury causes me to struggle with significantly impaired speech and weakness down the right-hand side of my body," said Jeff.

"This weakness resulted in poor mobility, particularly in the early stages of recovery. Despite these ongoing challenges, I now work as an IT Engineer at the University of South Wales. This summer, I was delighted to achieve my MSc degree in Computing!"

The icing on the cake for Jeff was being nominated for the Alex Richardson Achiever of the Year award, for which he received a certificate from James Cracknell at the Headway Annual Awards ceremony in London.

"I felt very proud to be shortlisted as a national finalist," said Jeff. "My struggles after brain injury and particularly during the past three years while completing my degree have been more stressful than I anticipated!

"However, it is elating to know that I've finally achieved my graduation goal and being praised for my achievements with this nomination has lifted me even higher!

"I still get tired and sleep everyday during my lunch-hour. Fatigue after brain injury may be something I shall always battle to overcome, but setting attainable life goals has proved a crucial rehabilitation tool throughout my recovery.

"I've learned to aim high in whatever life goals you pursue – keep striving for small targets and you might surprise yourself!"