“As a para-climber I often hear the phrase: ‘He shouldn't be here – he doesn't look disabled.’ Having a hidden disability can be very frustrating indeed.”

When World Cup para-climber Dave Bowes, from Wirral, sustained a traumatic brain injury in a motorbike accident in 2007, he began to experience severe behavioural changes and other hidden effects that cost him his career and challenged his marriage.

Dave had been travelling to Brighton by motorbike with his two brothers when a car pulled out of a junction without looking.

Shockingly, Dave's condition was dismissed as a mild concussion but, not content with this diagnosis, the couple returned to the doctors every week for several months until their GP finally agreed to send Dave for a more thorough examination.

“Several months later, Dave was sent to a neuro-psychiatrist where he was put on heavy medication before he was finally examined by a brain injury clinician in London. A full three years after the accident, Dave was finally diagnosed as having as severe traumatic brain injury.

“We were always convinced something wasn’t right and that a diagnosis of mild concussion simply didn’t fit with my ongoing problems,” said Dave. “Having been discharged with no scan just two hours after arriving at hospital, after such a serious collision, and having to fight to get a full and proper assessment, I worry that many others are slipping through the net and not getting the diagnosis or help they need.

“It was entirely down to me to research what was happening to me and for a long time the doctors refused to believe anything serious was going on.

“I didn't know about Headway until five years after my crash. In the end, I developed my own recovery plan and coping mechanisms, some of which I still use today and have passed on to others now I am a member of Headway Wirral.

“This needs to be changed and that is why I choose to compete as an international para-climber. I figured competitive sport was the tallest soap box I could stand on to spread the word.

After the accident, my entire personality changed. The old Dave died that day and a new Dave was born. 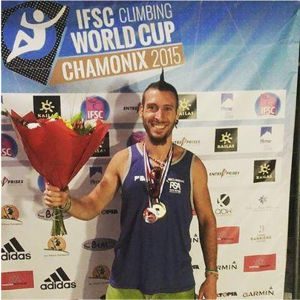 “Sheema and I had been married for just three months at the time of the incident and I became uncharacteristically aggressive. My mood swings put enormous pressure on our marriage. The effects of my brain injury have been unbelievably tough on Sheema, but she has taken our vow of 'in sickness and in health' very seriously.”

Eight years on from Dave's ordeal, the couple have two children, Vinnie, four, and Maya, one.

“We still have relationship-testing times but I want to be a father my children can look up to by raising awareness of brain injury and Headway internationally,” said Dave.

This year, Dave entered the Para-Climbing World Cup for the second time and won the silver medal in the European Championships. In February, Dave even tried his hand at ice-climbing, competing against non-disabled opponents. He did incredibly well to finish third in the Great Britain team, ranking 48th worldwide.

“The invisible consequences of my brain injury mean I receive much criticism for competing as a para-climber,” said Dave. “I often hear the phrase: ‘He shouldn't be here – he doesn't look disabled.’

“When people look at a competitor with one arm or one leg, it's easy to understand the extent of that person's disability. However, when people look at me with my neatly-cut hair and 'normal' appearance, it's difficult for them to comprehend just how debilitating a brain injury can be.

“I even grew a mo-hawk and a beard in the hope that a new and more extreme image might help people understand how different I feel from everyone else. A hidden disability indeed.”