Since its launch last year, the Headway Brain Injury ID Card has been used by its holders in many different scenarios. We’ve heard of people using them to explain to bar staff why they are slurring or to shop workers to request a bit of help.

But for Philippa-Anne Dewhirst, 40, it was used for something a lot of more important – to help her get the right support when she was interviewed by the police.

Philippa-Anne was 24 when she sustained a brain injury in a car crash. Following intense rehabilitation, in which she had to learn to walk and talk again, she was able to slowly rebuild her life and cope with the memory, coordination and cognitive issues her brain injury has left her with.

In January this year, she was assisting her sister deal with the challenging behaviour of her 13 year old nephew. He has attention deficit hyperactivity disorder and oppositional defiant disorder - where children have disruptive and oppositional behaviour that is particularly directed towards authority figures. This mean he is an extremely complex child, and mentally is a few years behind his physical age.

“He gets out of control, and aggressive at the flip of a switch, and although he's not particularly big,  he can become extremely strong, and difficult to manage,” said Philippa-Anne.

“He'd had yet another bad day at school, which meant that my sister had to collect him early. But when he realised what was happening he ran off.  We found him at home, and when I approached him to tell him off, he pushed past me, and tried to lock himself in his room and cracked his door by slamming it.

“He was out of control and was very threatening to both myself and his mum. I had no choice but to safely pin him to the floor until he calmed down.”

He eventually he did calmed down and the family thought that the incident was over.

But unknown to Phillipa and her sister, her nephew phoned his social worker and accused her of trying to kill him.

She said: “The social worker and police arrived and explained that I would have to give a statement.  I contacted the number on my Headway ID Card and spoke to a solicitor about what had happened and he offered to attend the police station with me.

“Having someone in the interview with me who knew the process was very reassuring as I was very anxious. He helped me to understand my rights, and read through the notes I had made to help me remember the sequence of events. He helped me feel secure, and potentially explain or re-word anything the officer asked me, so that I could answer honestly, and to the best of my ability.

“Before my interview, I presented my ID card, which helped the officers I came into contact with understand that I might struggle to answer their questions, and be prepared to give me time to find the right words, or formulate an answer that could be understood.

“I can get very frustrated if I feel that I'm not being heard, or understood, or that I'm being treated differently. Having the ID card helped to explain any switches in attitude or odd behaviours that I displayed.”

The police full investigated the incident and found no evidence of any form of wrong doing, and Philippa was cleared of the charge against her.

She said she would encourage every brain injury survivor to carry a ID Card.

She said: “It just like that it’s there if I need a little help explaining things to people. It helps me explain what could be described as 'out of the ordinary' behaviour, and has helped security, the police, and friends to understand that what they're seeing from me, is normal. 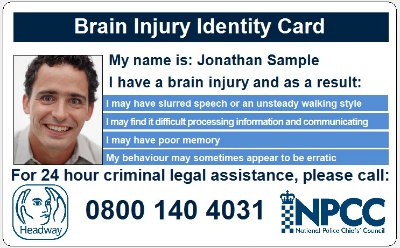 Example of our ID card

“I don't see the world the way that an average person does, and it makes me feel secure. Knowing that I carry the ID card and have a way to explain what most people see as unsettling, bad, or bizarre behaviour, is very reassuring.”