Jody Mardula was the Director of the Centre for Mindfulness Research and Practice at Bangor University when she had a subarachnoid haemorrhage.

Jody and I knew each other as university colleagues – she had helped me when I was setting up a research project about mindfulness and brain injury. We had no idea that this was the start of a much longer and more personal journey together.

We met again in the North Wales Brain Injury Service, where I was working on the mindfulness research project. Jody was there to see one of my colleagues. I made a mistake and walked into the room they were using and I was shocked to see how frail she looked.

I started going to visit Jody at home. We drank tea and laughed a lot; getting to know Jody was a delight. I soon began to realise that Jody’s unusual ability to describe her brain injury experience offered a tremendous opportunity. She could say how things felt on the inside, and I was captivated by her vivid descriptions.

Eventually, I persuaded her that a book about her brain injury could help people in the same situation. Jody would write her story, based partly on her diary, and illustrate it with her own drawings. I would describe Jody’s haemorrhage and how it had affected her from a neuropsychologist’s perspective.

The neuropsychological commentary is in two parts. The first describes Jody’s difficulties with attention, memory, executive function and perception, and gives advice about managing these problems. The second is about emotional adjustment after a brain injury; loss and grief, changes in self-awareness and identity, acceptance and the needs of the family.

The book also contains mindfulness practices that Jody developed for herself and used after her brain injury. Jody had practiced mindfulness for many years before her brain injury. The instinct to focus on her breath, and on sensations such as the coolness of the sheets in her hospital bed, was very comforting in the early days of her recovery.

Mindful awareness brought her back into the present moment, and allowed her to cope more easily with pain, uncertainty and anxiety.

Even so, Jody could not practice mindfulness as she had done before. She could not meditate for 30 or 40 minutes – her concentration was too poor, and she could not follow the words on the mindfulness recordings. She was easily distracted and could not control the focus of her attention. This improved slowly over time, but the practices that she developed after her brain injury are much better suited to the way she is now.

Jody’s new practices are included in the book (in print, and as voice recordings). They are shorter, simpler, less ‘wordy’ than traditional meditations, and focus on elements that are physical and more tangible. One of them, the Owl Practice, was created specifically for people with dementia, which Jody also has now.

Jody had a wide range of difficulties after her injury - ranging from a weak leg to difficulties with planning and organising her life. She could get lost easily; the world was often unbearably loud and bright, and overwhelmingly confusing.

Jody learned to use her mindfulness to help her cope with this. She wrote:

“If anything went wrong or I got confused, upset or lost, I would stop and take out whatever I needed to be comfortable for a while. Things like my Kindle, essential headache pills and my shawl. I had learnt to expect these events as normal parts of pretty much anything; a shopping trip or just out for a walk, I would always be prepared for a crash.

I had my mindfulness practice and that helped me settle when my head was noisy and painful, to breathe and be grounded and to accept that this was just the way things were.

Although Jody already had longstanding meditation practice, survivors with no experience of meditation can also benefit from learning mindfulness. We have noticed this recently whilst meditating online with brain injury groups; I also saw it many times during the research project, and when working with brain injured families.

Short simple practices can be soothing and calming, they can ground us, change our perspective, and break the loop of worry and concern. Many people in the study felt less anxious and less depressed when they practiced mindfulness, something that has been reported in several other brain injury studies. 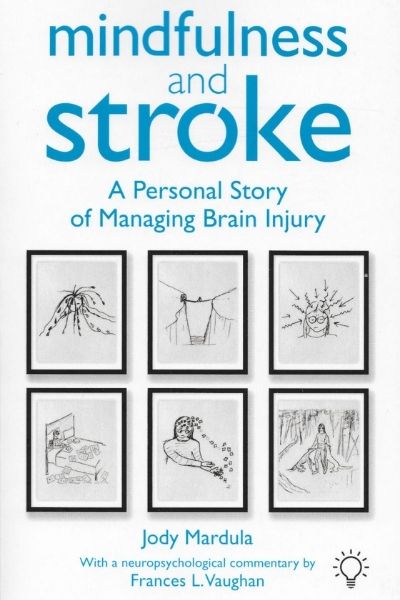 Mindfulness and Stroke: A personal story of managing brain injury by Jody Mardula, with a neuropsychological commentary by Frances L. Vaughan is available to buy from Pavillion.

In this video, Consultant Clinical Neuropsychologist Dr Niels Detert explains the foundation of mindfulness, how to practice it and leads the viewer through an interactive mindfulness session.