Brain injury may occasionally cause damage to the hypothalamus and/or pituitary gland, which are small structures at the base of the brain responsible for regulating the body's hormones. Damage to these areas can lead to insufficient or increased release of one or more hormones, which causes disruption of the body's ability to maintain a stable internal environment (homeostasis).

If damage to the pituitary gland leads to a reduction in hormone production the resulting condition is known as hypopituitarism.

On this page, we explain: 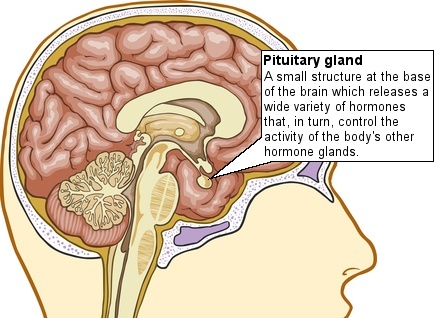 What are the symptoms of hypopituitarism?

In the early stages after brain injury most people's hormone levels are severely affected, making diagnosis of hypopituitarism difficult. Later in the recovery process it may become clear that some symptoms are caused by hormonal changes and some rehabilitation units test for this on assessment. However, there are currently no clear guidelines in place for the assessment and treatment of pituitary function after brain injury and more research is needed to determine the scale of the problem.

The effects of pituitary and hypothalamus injury are many and varied because of the huge amount of hormones which can be affected. Some symptoms are similar to the more common effects of brain injury and that is another reason why the problem may be underdiagnosed.

Examples of overlapping symptoms are:

Each symptom is caused by a change in the level of a particular hormone that is produced by the pituitary gland. There are many possible causes of the above symptoms, particularly after brain injury, so a thorough assessment is required before any diagnosis can be made.

How are hormonal imbalances assessed?

If you suspect you or a relative may be experiencing the symptoms of hypopituitarism, or any other hormonal condition, you should speak to your GP. If they feel it is appropriate, they will be able to refer you for further assessment with a specialist in the field, such as an endocrinologist. They will be able to run a variety of hormone level tests and may refer you for a scan to look for signs of damage to the hypothalamus or pituitary gland.

How is hypopituitarism treated?

In the early stages, hormonal problems can cause a condition called neurogenic diabetes insipidus, which is characterised by increased thirst and excessive production of dilute urine. This is due to a reduction in secretion of a hormone called vasopressin (anti-diuretic hormone) and can be treated by administering desmopressin (manufactured anti-diuretic hormone) and replacing lost fluids.

In the later stages, where hypopituitarism is confirmed, treatment may be given. Hormone replacement therapy may be used to restore hormones to normal levels, which should help to manage the symptoms. There are different treatments available, depending on the particular hormones involved and the nature and extent of the symptoms.

The assessment and treatment of hypopituitarism after brain injury is a complex process and more research is needed into the potential long-term benefits of hormone replacement therapy. As with any treatment, you should discuss the pros and cons with your doctor before making any decisions.

There are a number of studies into hypopituitarism after brain injury, but as yet the full extent of the problem is unknown. It seems to occur mainly after severe brain injury, however some studies have shown that damage to the pituitary gland may occasionally occur after seemingly minor head injuries. You should be particularly aware that many of the symptoms can be caused by damage elsewhere in the brain, and if this is the case treatment for pituitary dysfunction will not be effective.

Contact the Headway helpline if you need further support or have any questions about the information on this page.