For 49-year-old Mike Palmer, from Norfolk, battling cognitive fatigue has been one of his biggest challenges after being diagnosed with a brain tumour in August 2015.

From being an outgoing socialite to struggling to cope with the noise of a busy supermarket, Mike now shares his story below to help educate the general public on how devastating and life-changing the hidden effects of brain injury can be...

"In 2011, I began suffering with severe migraine headaches," Mike recalled.

"It was around the time I had separated from my wife after 21 years together and was under a lot of stress. The migraines would leave me bedridden for two or three days at a time. They got so bad that a doctor had to come out to the house – he diagnosed the pain as 'cluster headaches' and prescribed pain-relief."

In 2013, Mike met his now-fiancée Debbie and the couple moved in together shortly afterwards.

"I'd met a lovely lady and things were going well," said Mike. "However, by 2014 my migraines were getting more frequent until I was suffering with chronic headaches at least once every six or seven weeks.

"My GP referred me to a neurology specialist and it wasn't long before a consultant had booked me in for a more thorough examination."

On 19 August 2015, an MRI scan showed that a 6cm brain tumour had developed on Mike's brain. He was referred to Addenbrooke's Hospital, in Cambridgeshire, for brain surgery.

"My operation was cancelled twice but I finally underwent the surgery on 6 November 2015," Mike continued. "I was taken in on the Friday and out by the Monday.

"It wasn't until around Christmas time that my long-term cognitive issues became really apparent."

"Physically, I struggled – and still struggle today – with numbness down the left-hand side of my body," said Mike. "However, it is the hidden effects of my brain tumour that have had the biggest impact upon my life.

"Fatigue after brain injury is a massive issue for me, particularly as I would become tired after completing basic everyday routines that I used to complete with ease.

"Mood swings as a result of extreme fatigue also caused problems in my relationships during the first nine or ten months following my brain surgery. I would often get angry, frustrated, quick to burst into tears, depressed, the list goes on...

"Other cognitive challenges, including poor concentration, put additional strain on my ability to communicate and socialise. For instance, when talking to a group of people, I can now only listen or reply to one person at a time and even now I struggle in big groups of people.

Mike added: "I thought I'd be 'back to normal' after 18 months, but brain injury is more complicated than a quick-fix. It's a lengthy process.

"There are two different guys now – pre-operation Mike and post-operation Mike. Sometimes I feel as though I'm stuck in-between two lives, and a sense of worthlessness and loss of control takes hold.

"Working to improve my lost memory and problem solving skills is helped greatly by attending support sessions every Monday at Headway Norfolk and Waveney.

"With the charity's support, I'm now learning how to recognise the signs of brain injury-related tiredness, particularly as even doing basic everyday tasks I once took for granted can have a real knock on effect when it comes to energy levels.

"Headway has given me the strategies and techniques needed to manage the symptoms of fatigue by establishing new routines and taking regular breaks and rests between activities to ensure my brain isn't overexerted.

"As an active sportsman, I played rugby until I was 47 and I'm quite a burly guy. Following my brain tumour I can't really take part in sports anymore, but people say that being in good shape before my brain injury has helped me to recover more quickly."

Following his brain tumour diagnosis, Mike's driving licence was suspended until he could be passed as fit to drive again by the Driver and Vehicle Licensing Agency (DVLA).

"Thankfully, I completed an assessment and got my driving licence back after just seven months," Mike explained. "Although I'm now able to drive again, my brain injury means I can no longer work as a bus driver for children with learning difficulties, which is a shame.

"I don't mind too much having to stop work, though for a while my inability to drive put extra pressure on Debbie as she had to drive me everywhere.

"The past year has been a very testing time for my family and friends. When your loved one is thrown into the unknown world of brain injury, it is difficult to comprehend how much them losing control over everyday abilities can affect family life.

"Both Debbie and Headway Norfolk and Waveney have been absolutely fantastic throughout my challenges, and helped me to remain positive about my future after brain injury."

A year on from his ordeal, Mike is still working through his uphill fight to recovery. He and Debbie recently got engaged and are now looking to the future.

"It has all been a massive ongoing learning curve," said Mike.

"There are still ongoing challenges and I want to raise awareness of how serious and debilitating the hidden effects of brain injury can be. You see people in a wheelchair and clock that their life may contain a variety of challenges. To look at me, you would not think I have a brain injury.

"People often ask: 'How are you – you look well.' They mean it as a nice thing to say, but it can be difficult to hear as they have no idea how hard work daily life can be when you're battling to rebuild their lives after brain injury.

I want to help raise awareness that brain injury does not discriminate age, nationality or gender. It can strike anyone, at anytime, but Headway is there to support you when it does.

Personal Courage of the Year

This year, Mike was named a finalist in the Broadland Community at Heart Awards, which is run by Broadland District Council, after Debbie and Mike's son, Kieran, entered him into the 'Personal Courage of the Year' category.

"My family have been instrumental to my recovery," said Mike. "They continue to support me in the most amazing ways possible. We always try and look for the optimistic angles in our situation and will continue to battle on to improve our lives.

"I'm not saying that every day is a pot of gold. There are bad days. But it is all about having a positive attitude and believing you can keep getting better.

Find your strength in those around you, and hold on to the knowledge that there can be life after brain injury. 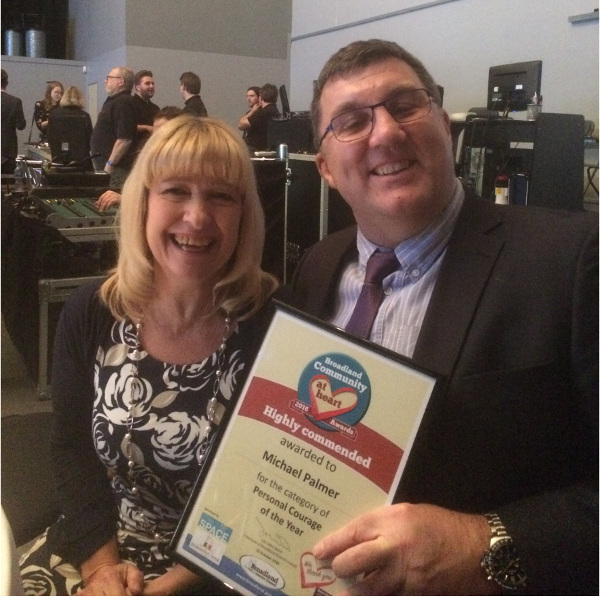