To celebrate National Volunteers' Week, which runs from June 1-7, Nicola Brown told us how volunteering with Headway Gwynedd changed her life.

When she was just 24, Nicola started having nocturnal seizures but after several weeks, doctors were no closer to knowing the cause. Eventually, Nicola was rushed to hospital with a suspected arteriovenous malformation.

An arteriovenous malformation (AVM) is a tangle of abnormal blood vessels connecting arteries and veins in the brain, which disrupts the flow of oxygen around the body.

On 17 December 2017, while Nicola should have been looking forward to Christmas with her five-year-old son and six-month-old daughter, she was getting ready to undergo major surgery.

Things went from bad to worse when Nicola suffered a life-threatening bleed on the brain just moments before she was due to have her operation.

Thankfully, the surgery was a success and Nicola was told she would need to stay in hospital for several weeks while recovered. But the mother-of-two was desperate not to miss her daughter's first Christmas and discharged herself.

I should never have gone home. It was the worst thing I could have done.

"I was more of a hindrance than a help. I used to make a cup of tea and take it to someone, then immediately go back and make another cup of tea and do it all again.

"We would go into town and people would ask about my daughter, but I couldn't remember how old she was. I couldn't even remember her name.

"Even now I can't remember the first two years of my daughter's life."

"The fatigue is a daily struggle," she said. "By the end of the day I'm so tired I am easily irritated and I have more of a temper."

Although Nicola has had to learn to cope with the lasting effects of her brain injury, she has found her purpose in life through volunteering to help other brain injury survivors.

Nicola said: "When I was in rehab one of the nurses said 'I understand' and I thought, how can you? That's when I had my brainwave and decided I wanted to help other people who have experienced brain injury."

In 2014, Nicola began studying neuropsychology at Bangor University and was encouraged to get involved with volunteering at Headway by Professor Bob Rafael.

"I started volunteering with Headway Gwynedd four years ago and now I'm there almost every day," she said.

I find it so rewarding to support other brain injury survivors like myself.

"In 2014, I was awarded Bangor University's High Sheriff Award for volunteering and last year I received their Volunteer of the Year Award."

As well as getting a buzz from helping others, being around other brain injury survivors has had huge benefits for Nicola too.

"I feel comfortable at Headway Gwynedd because I can be myself," she said.

"I have a tendency to talk about three things at once and forget where I was going with my sentence. But at Headway nobody bats an eyelid. No-one treats me like I'm weird." 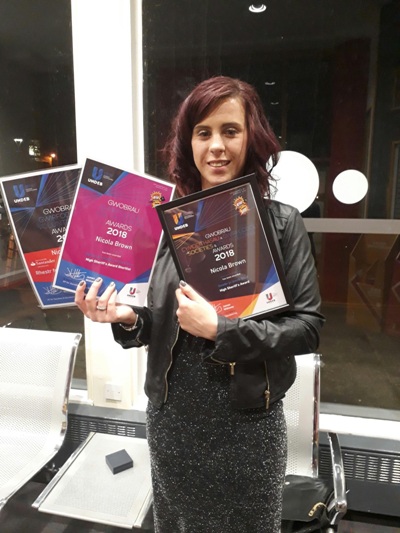 The people there are my best friends. I love it.

If you are inspired by Nicola's story and would like to find out more about volunteering with Headway read more here: https://www.headway.org.uk/donate/volunteer/