A family’s world can be flipped upside down by a brain injury. Adults can struggle to understand and cope with the immense changes that the ‘hidden disability’ can bring, even if they have been by the survivor’s bedside in hospital, given information and offered support.

But what of children, who suddenly see a parent so changed and are unable to make sense of this?

Kristin McIlquham found herself in this confusing situation at just six years old when her father sustained a life-changing brain injury. Here, she shares her reflections of what it was like to cope with the ripple effects of a brain injury on the entire family.

Kristin’s father, Bill, was in his late 30s living a flourishing life. A popular and creative entrepreneur, he owned a nightclub, was a great singer, had a family and was a well-respected member of his community. Things began to change for him when he started suffering headaches.

“They were extreme headaches,” said Kristin. “He went into hospital, where he had three aneurysms that burst on the left side of his brain. My half-brother had also suffered from a brain haemorrhage at roughly the same age, so it was very scary for us.”

Bill was in a coma for five months and gradually regained consciousness. By the time he returned home, he was a changed man.

“He had forgotten who we were,” said Kristin. “He had to learn how to do everything again. He would tell rude and inappropriate jokes and he lost the ability to sing in tune.

“He became depressed, aggressive, and irritable. It was like my dad had died and had been replaced by an imposter.

“I felt a lot of anger and embarrassment and I never wanted to bring my friends around to meet him.

At the time it was very confusing. I had no help or understanding about the situation, I was just a child.

These feelings and experiences remained with Kristin throughout her life. As an adult, she moved into the arts and became an actress and writer. It was only when she began writing a play about her experiences of brain injury that she started to make sense of her perplexing childhood experiences.

“When I was approaching my 40th birthday, I wanted to address what happened to us all,” she said. “I began writing this play to help me to understand a little more.

“I describe the play as something that’s forced me to confront, kicking and screaming, some of the unfinished business in my life. It’ll be a funny and moving true story about the aftermath of my father’s brain injury and the impact it had on our relationship, my life, and, well, pretty much everything.”

Kristin began researching others’ experiences to help shape the play.

“I can only speak for my experience; I want this play to be seen by other families who have been affected by the same thing. I never saw our story reflected anywhere growing up, yet it affects so many people.

“In my research I was told of a quote a six-year-old said: ‘My father died but not in the same way as my bunny rabbit.’ I hold onto that.

“I learnt that no matter what age you are, you will always be the child of someone with a brain injury, and whatever feelings that conjures up, well, that is okay. Feelings of embarrassment and anger are totally valid, never feel guilty for having them.”

Kristin hopes that her play will help to improve understanding of brain injury.

“I would hope people leave with a little more knowledge of what brain injury is and how it can affect families. For people to think about the blurred lines of memory and to leave feeling a little bit of hope. 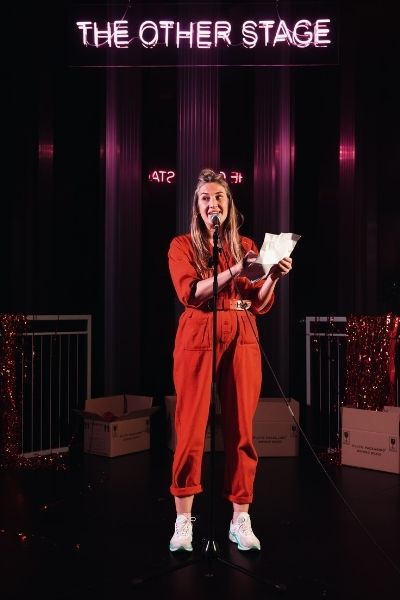 “Mainly I want people to have empathy for both sides.

Brain injury affects the whole family, and it’s so important to understand that even family members who can’t express themselves, like children, can be affected too.

In November 2021 and February 2022, Kristin performed her play, titled Headcase, at the Queen’s Theatre in Hornchurch, Essex.