'Brain injury caused by trauma to the head (including the effects upon the brain of other possible complications of injury, notably hypoxemia and hypotension, and intracerebral haematoma)'.

In other words, a brain injury is caused at least initially by outside force, but includes the complications which can follow, such as damage caused by lack of oxygen, and rising pressure and swelling in the brain.

A traumatic brain injury can be seen as a chain of events:

How severe is the brain injury?

See the factors that can influence how severe a brain injury is, and the potential for long-term effects

There are three sorts of first injury - closed, open and crush.

Closed head injuries are the most common type, and are so called because no break of the skin or open wound is visible. These often happen as a result of rapid acceleration or deceleration, for example when a car hits a brick wall, or a car is hit from behind at traffic lights. The head is rocked back and forth or rotated, and the brain must follow the movement of the skull. It can twist, and the billions of nerve fibres which make up the brain can be twisted, stretched and even torn in the process.

Even mild injuries of this sort can produce damage which is quite widespread throughout the brain. This is defined as diffuse brain injury. The front of the skull has sharp bony ridges with which the brain can also collide, causing more damage. Arteries and veins running through the brain can be damaged, allowing blood to leak. 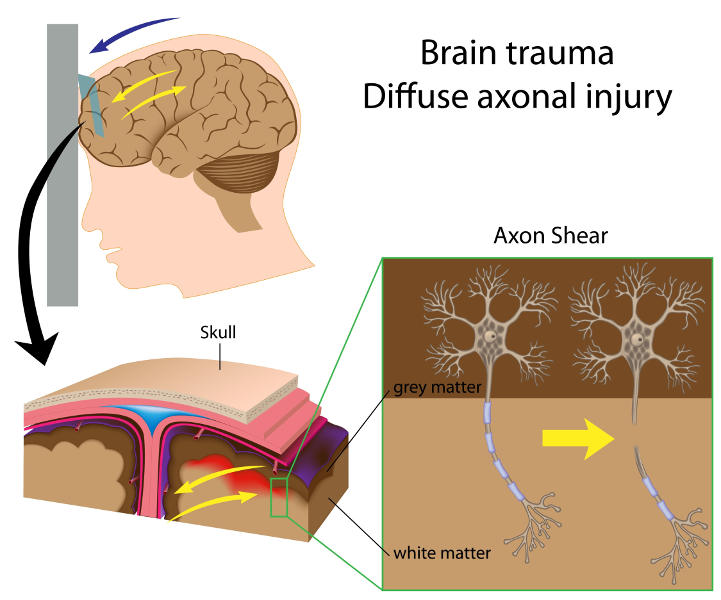 These are not so common. In this type of injury the skull is opened and the brain exposed and damaged. This could be due to a bullet wound, or collision with a sharp object such as a motorcycle brake lever, or being hit by a pickaxe. If the damage is limited to one specific area, outcomes can be quite good, even though the accident may have seemed horrific. In many cases, however, this type of injury may be combined with an acceleration type injury as well.

In this type of injury, the head might be caught between two hard objects, such as the wheel of a car and the road. This is the least common type of injury, and often damages the base of the skull and nerves of the brain stem rather than the brain itself. There may be no loss of consciousness.

This happens when the brain is starved of oxygen, which makes damage from the first injury worse. It can happen for several reasons. Examples are choking on vomit after an accident, blood blocking a person's airway, or by the position which someone is lying in obstructing their airway. If other injuries are present, as they often are, serious blood loss can affect blood flow to the brain. As a result, the amount of oxygen reaching the brain can be reduced.

Understanding the relationship between the first injury and the effects of lack of oxygen has led to improvements in the kind of emergency treatment administered at the site of an accident by paramedics. They will make sure breathing is maintained and blood pressure is brought back to normal levels by emergency transfusions.

This can take place at any time after the first and second injury, in the days and sometimes weeks which follow, and could be as a result of bleeding, bruising or swelling in the brain or because blood clots have developed.

Blood leaking from torn blood vessels and other body fluids leaking into the area cause the brain to swell. This is a serious problem because the skull is a fixed space, and there is no room for expansion. It causes complications in two ways. Firstly, the walls of the skull are hard and unyielding, and damage the soft brain when it squeezes against them. Secondly, when the brain swells it can squeeze the blood vessels, limiting the brain's blood circulation. This can be fatal, so intracranial pressure is monitored very carefully once the patient is in hospital.

Measures to reduce the risk of raised pressure include putting the patient on a ventilator to ensure a good supply of oxygen, and controlling the amount of water and salts in the body to cut down on the flow of fluid into the brain.

Blood clots occur when blood has leaked from damaged veins and arteries and then pools into a clot. They can press on the surrounding brain tissue which can damage it, and they also raise pressure in the brain. Clots can occur in the brain itself (an intercerebral clot) or in the space between the brain and the skull (a subdural or an extradural clot). Blood clots, also called haematomas, can occur after quite minor injuries, and this is why patients are often kept under observation in hospital until the risk of a clot forming is likely to be over.

The effects of traumatic brain injury on brain function

Damage to the nerve fibres deep in the central part of the brain, which normally keeps a person awake and alert, results in the most obvious of symptoms - coma.

Coma, loss of power in the arms and legs, and speech impairment are the most visible signs of brain injury. However, traumatic brain injury causes numerous 'hidden disabilities' in that it results in changes to personality, thinking and memory. For example, damage to the brain behind the forehead (frontal lobes) results in behavioural problems, such as loss of insight and self-restraint.