In Autumn 2013, university student Angus Swanson, 20 and from Monmouthshire, had been playing rugby for the King's College University team in London when he suffered a blow to the head during a tackle.

The teenager collapsed at the side of the pitch and was left fighting for his life as the impact left him in a coma with a near-fatal brain injury. When he eventually regained consciousness almost four weeks later, Angus was paralysed and doctors warned he may never walk again.

More than two years on from his ordeal, Angus has relearned how to walk and has even returned to university to finish his degree in War Studies. However, his battle to recovery continues and, now, Angus shares his story below to raise awareness of brain injury in support of Headway's 'If in doubt, sit it out' sports concussion campaign.

Collapsed at side of pitch

"It had not rained for weeks before the game and the pitch was very hard," Angus recalled.

"I took the ball into contact and was intercepted by another player. I fell backwards and my head hit the ground with full force. For a while after the impact I was quite lucid. I remember getting up, walking from the pitch and telling my coach that I wanted to shake the opposition players' hands before he sensibly took me out of the game.

"However, I promptly collapsed at the side of the pitch and started having a fit. This was when those around me suddenly realised the severity of the situation and called for an ambulance. After that, everything just faded into blackness."

Angus was airlifted to the Royal London Hospital where doctors discovered that the impact of the blow had caused him to suffer a life-threatening brain haemorrhage.

The teen’s heart stopped and medical staff told his parents three times that they could do nothing else for him.

"It was quite a shock for my parents to suddenly discover that their fit and healthy son was most likely going to die," Angus continued.

"The most difficult thing for them was having the painful job of explaining the situation to my siblings, especially my younger brother. My mother would regularly contact the national Headway helpline for advice and support."

Thankfully, Angus began to show signs of improvement, though it was not until almost four weeks later that he started to regain consciousness. 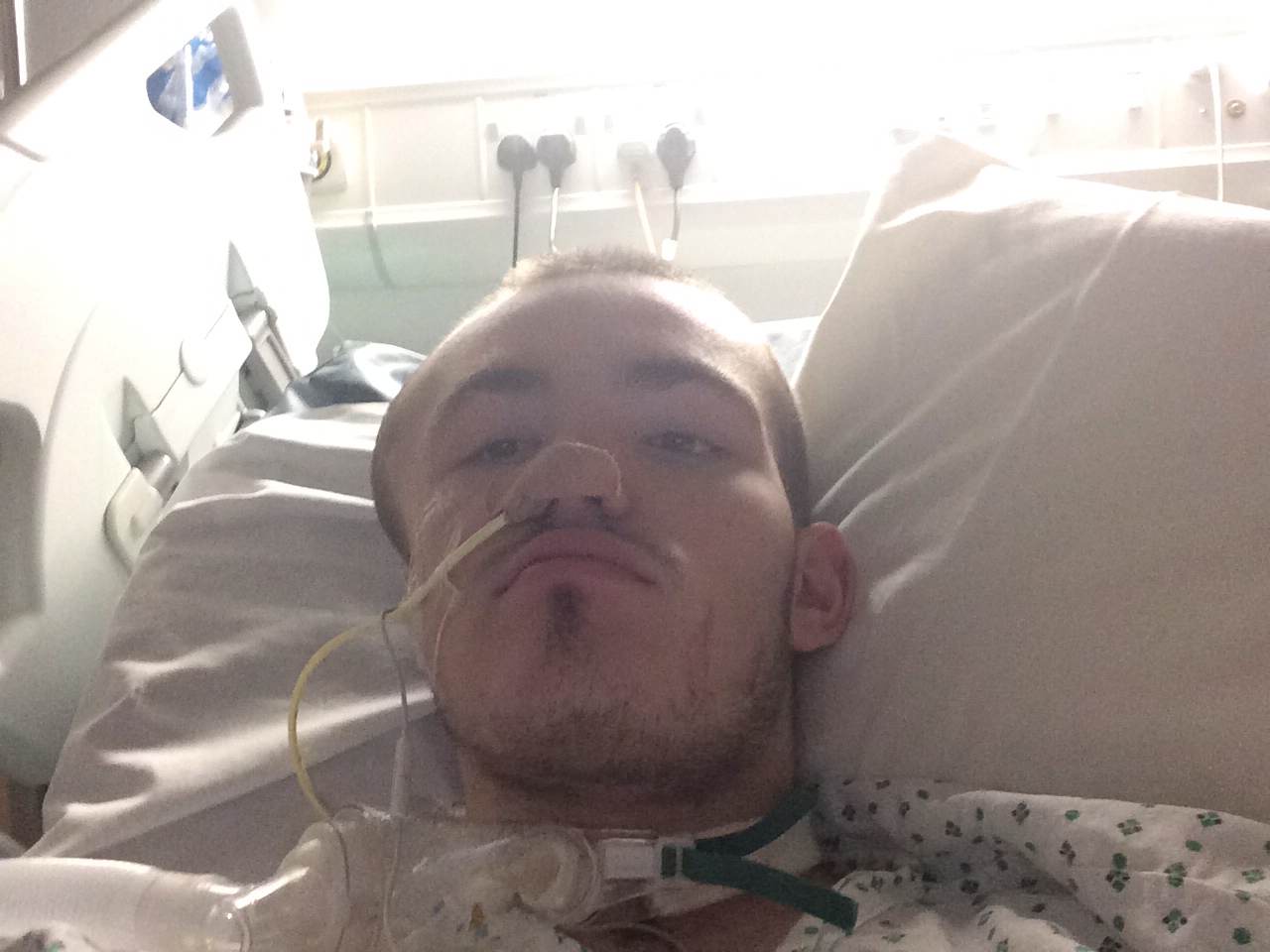 'Life in a wheelchair'

“When I eventually came round I was paralysed," Angus remembered.

"Not exactly the ideal way to end a rugby game! I couldn’t talk and was being fed via a nasogastric tube. A neurosurgeon told me that I would spend the rest of my life in a wheelchair and would never play rugby again. This news shattered my world.”

Angus still needed a wheelchair to move around when he was transferred to the Frenchay Brain Injury Rehabilitation Centre, in Bristol, to begin his long journey of recovery. However, after working with physiotherapists to strengthen movement in his limbs, he was eventually able to stand up unaided for the first time in several months.

“The thought of having to spend the rest of my life in a wheelchair drove me forward,” said Angus.

“With extensive help from some very skilled professionals, I would pull myself out of the wheelchair in the hope that it would one day lead to me being able to walk again. I told myself that I would walk my dog again and wouldn't take no for an answer.

“It took six weeks and the support of incredible physiotherapists, but I eventually relearned how to walk. My physiotherapy sessions continued in Abergavenny when the Frenchay staff finally considered me well enough to return home to Wales."

Angus was forced to postpone his studies while he focused on the early stages of his recovery, but returning to education soon became his primary goal. In September, he decided to move back to London to finish what he started.

“For me, heading back to university has been the hardest challenge as you soon become immersed in constant social interaction. This can be quite overwhelming, particularly as London is always so incredibly busy. The main problem is that I get tired very easily following my brain injury – even without doing any strenuous activities.

“Fatigue causes me to sleep for long periods of time. It helps that I have some genuinely great and supportive friends. You are always going to get the people in the university bar who call you a lightweight if you leave early on a night out, but real friends understand when you need a rest and give you the space you need.

"The university has also been very supportive and offered me extra time or resources should I need it. The university's Chaplain, Tim, is a family friend and, should people not understand the complexities of brain injury, he can vouch for the long struggle it has been to battle back from what was almost my death bed.”

Despite making an incredible recovery, even today Angus struggles with the lasting effects of his brain injury and has found it difficult to readopt the life he led before the injury.

“Since the incident, my reaction times are pretty slow,” said Angus.

“The way I perceive things is also different now because the right hemisphere of my brain is damaged. At one point, I went through a period of suffering with quite bad depression.

"People who live with the effects of head injuries often have to go through a life-changing process. I’m thankful to have received so much encouragement from those around me, especially my parents. Support is vital to recovery.”

"The union picked me up through the dark days and kept my faith in rugby alive as a sport where you always know that someone has your back no matter what the circumstances.

"I can never return to playing rugby as another head injury could kill me. Instead, I now coach a university rugby team so I can be involved with the game in any way possible without putting my health at risk.

“I’ve come a long way and it’s taken a lot of determination, but I had to do everything I could to pick myself up piece by piece and try to move on from those early stages of brain injury."

Angus now backs calls from Headway for more investment to support those who have suffered a head injury. Last year, he featured in a BBC Wales television piece with Julie Smith, from Headway Cardiff, to raise awareness of concussion in sport.

Read more about Angus Swanson on the Wales Online website.