Working as a football coach and referee in America, Mike McCall, 51 and from Cosham, was living the dream. But Mike's life was to be turned upside down when he contracted septicemia, leaving him in a coma with a life-changing brain injury.

"Nine years ago, I had been enjoying life at my home in Portland, Oregon, when I started feeling inexplicably unwell," said Mike.

"When I fell ill, my skin became very jaundiced and I realised quite quickly that it was serious. The USA doesn't have a National Health Service like Britain and the cost of healthcare while living over there concerned me, so I made the difficult decision to move back home to the UK.

"Upon my return to my hometown of Cosham, near Portsmouth, I visited my local hospital where I was diagnosed with pancreatitis and kept in for two weeks."

Mike's decision to move home and seek urgent medical attention was to have yet graver significance.

"Following my release from hospital, I went to my doctor for a follow-up appointment," Mike continued.

"I collapsed right there and then in front of my GP. An ambulance rushed me, unconscious, to a nearby hospital in Portsmouth, where doctors diagnosed me with a life-threatening case of septicemia.

"Medics told my parents that they didn’t think I was going to make it. Also known as 'bacteremia', septicemia is a serious bloodstream infection that can be fatal if it is left untreated. According to my family, the doctors were considering pulling the plug and turning off the life-support machine when, after nine days of being in a coma, I thankfully began to show signs of waking up."

During the three months Mike remained in hospital, he received three blood transfusions and a tracheotomy before he was eventually discharged and went back home to live with his parents.

"Recovering from a brain injury following septicemia is not an easy process," said Mike.

"In the early days of recovery, I was so agoraphobic. I couldn’t go out. It had a huge impact on my life and I soon found myself in a very dark place. I was frightened of doing anything. I had been so ill that it had scared me and I was depressed. I wanted to commit suicide.

"Apparently those feelings can sometimes happen to people who have been in a coma for some time and been left with a brain injury that affects the way they think and feel.

"I was so frustrated that I couldn’t do what I used to be able to do before my illness. What is more, following my illness I was diagnosed with diabetes and also started having problems with my heart that means I now need regular medication."

Before he discovered Headway Portsmouth and South East Hants and turned to the charity for support, Mike first made contact with St James’ Hospital, in Portsmouth, which cares for people with mental health issues.

"I did a six-week course with them which was very helpful," said Mike.

"My doctor introduced me to an occupational therapist to try and help me to do the things that I used to be able to do. They made suggestions on how to go about different things. That was helpful."

However, Mike found that his life was suddenly very different to how it was before brain injury. Even today, Mike struggles to walk and needs help in his day-to-day life.

'Headway has changed my life'

"I tried to go to the gym to build up strength with my walking but it didn’t work," Mike reflected. "I’m still not very steady on my feet. I have to sit down after a short walk. Brain injury and septicemia has affected all the organs in my body.

"Headway has changed my life. The team has given me the confidence to be around people again. Here, you aren’t looked at strangely because you’ve got a brain injury.

"It’s all been about building confidence and meeting people. It makes you aware of what you have got and how to deal with it. People aren’t judging you.

"My parents think a lot of Headway for the way that they have helped me get to literally back on my feet." 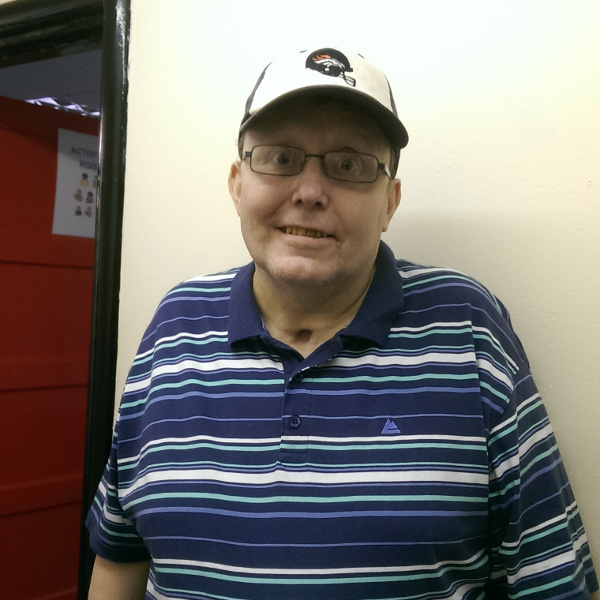 Life as a mentor

Now, Mike has even become a service user mentor for Headway, which means he works with people who are new to the group and helps them feel welcome and understand what the charity is all about.

"When a new person comes in, I will sit with that person and talk and make them feel welcome and help them join in with the group and see what they like doing," said Mike.

"I help give them the confidence that we are a friendly group and that you can be yourself, which I feel is a key part of recovery after a brain injury. I have come on leaps and bounds ever since I have been at Headway. The team has looked after me and given me the confidence to become a mentor.

"Today, I get out and about a lot more and make sure I regularly give myself something active to do, such as volunteering for Headway Portsmouth three mornings a week and helping out at Pompey in the Community, which involves looking after people with special needs.

"It’s very important work that makes you feel really good. I am in a much better position than I was and I am now confident that I can keep getting better."