The diagnosis of an anoxic brain injury is usually quite clear at an early stage from the details of what has happened and the patient's condition on arrival at hospital. Due to the wide variety of causes of anoxia, immediate treatment will depend on the particular circumstances. In all cases, efforts will be directed at restoring a normal heartbeat, blood pressure and a good supply of oxygen to the brain.

Patients who have suffered a serious anoxic episode will usually be admitted to an intensive care unit and put on a ventilator, preferably in a specialist neurosciences centre. The patient may need drugs to maintain adequate blood pressure and normal heart beat. Seizures are quite common after an anoxic brain injury and they can be prolonged and sometimes difficult to bring under control. This is a stage of critical illness and the full range of intensive care support is needed to give the best chances of survival and the best possible outcome. 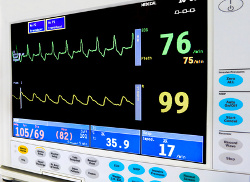 In some centres, patients may undergo medically induced cooling, referred to as therapeutic hypothermia. There is some evidence that this may have a protective effect on the brain and aid recovery by decreasing the oxygen and energy requirements of brain cells. It has been suggested that the protective effect of cooling the brain may be one reason why people sometimes survive after surprisingly long periods of immersion in very cold water. However, although therapeutic hypothermia has been known about for many years, it is still an area of controversy and can produce problems of its own, such as increased risk of infection or interference with blood clotting.

The family will want to know about the time scale of recovery after cerebral anoxia and the point at which further significant improvement becomes unlikely. As with any kind of acquired brain injury, it is difficult to give definitive rules about this.

There is some evidence that the outcome for a severe anoxic brain injury may be poorer than for a traumatic brain injury of equivalent severity, as assessed by the Glasgow Coma Scale (GCS). This may well be because of differences in the nature of the damage to the brain. In traumatic brain injury, damage to the axons (the projections that transmit messages between brain cells) is usually a prominent feature and the brain can often create alternative connections to compensate for this. In anoxic brain injury, the actual nerve cell bodies themselves are very vulnerable to damage and this damage is irreparable.

A number of factors can help to predict the outcome after cerebral anoxia:

As with other forms of acquired brain injury, people over the age of 50 years tend to do less well overall than younger ones, both in terms of how likely they are to survive in the first place and in the degree of long-term recovery. However, there is evidence that older people are able to benefit from rehabilitation programmes after cerebral anoxia and so deserve equally vigorous efforts to achieve the best possible outcome.

Duration of the anoxic episode

The outcome will be determined by how extensive the damage to the brain has been. This will depend on the length of time the brain was deprived of oxygen, which can often be estimated from information about what has happened. For example, it may be known that it took 15 minutes to restore a normal heart beat after a cardiac arrest, or that someone was immersed in a swimming pool for six minutes in a near drowning incident.

The duration of unconsciousness after an anoxic episode reflects the severity of the injury to the brain and helps predict the outcome. This has been studied in most detail after cardiac arrest and it has been found that only about 12% of patients who have been comatose for more than six hours after a cardiac arrest make a good recovery.

Normally, the pupils will constrict when a bright light is shone into the eyes. However, following brain injury, this reflex may be lost, causing the pupils to become dilated and fixed, no longer reacting to light. This is an unfavourable sign following an anoxic brain injury and indicates a disturbance in the function of the brainstem.

The EEG displays the electrical activity of the brain, recorded from a set of small metal disc electrodes placed on the scalp.

There has been a good deal of research on the EEG following cardiac arrest and the degree of EEG abnormality does have some value in helping to predict the outcome. This works best at the extremes. People with a normal EEG in the early stages after cardiac arrest have a very good chance of making a full recovery and those with profoundly abnormal EEGs often either do not survive at all, or will have severe disabilities. However, there is a large group who have intermediate degrees of EEG abnormality, where the outcome is less predictable. 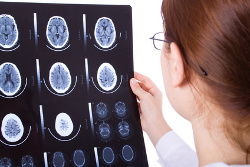 Computed Tomography (CT) and Magnetic Resonance Imaging (MRI) can show if there is brain swelling and give an indication of the degree of damage to the brain and the areas affected. This can help in predicting the outcome and trying to anticipate what level of neurological disability is likely in the event of survival. However, brain scans may show very little in some patients and what they show depends on the nature of the brain injury and the interval between the anoxic episode and the scan.

It is worth noting that, while there are other kinds of brain scanning techniques, such as Positron Emission Tomography (PET), functional Magnetic Resonance Imaging (fMRI), Single Photon Emission Computed Tomography (SPECT) and Magnetoencephalography (MEG), they are not usually available in hospitals and have little or no value in the assessment of brain injury. They are mainly used for research purposes.

The principles of rehabilitation after cerebral anoxia are the same as for other types of acquired brain injury. The goal is to provide support from an integrated team with a range of specialist skills, able to help with the different problems which may occur and to support each individual to achieve the best possible outcome.

The outlook for anoxic brain injury can be uncertain and different specialists have expressed quite varied views on the timescale of recovery, based on their own individual experiences. Good improvement within the first month after an anoxic episode suggests that the outcome may be more favourable.

The most rapid recovery is usually in the first six months, and by about one year the likely long-term outcome will have become clearer. However, improvement may continue for much longer after brain injury, certainly for several years, although the steps may become more modest and gradual after the first few months. Adequate rehabilitation from the earliest possible stage is vital in order to achieve the best outcome.

The effects of hypoxic or anoxic brain injury can range from mild, short-term symptoms through to severe, long-term issues