The history of Headway

The history of Headway

The 1970s had seen dramatic advances in neurosurgery, keeping alive people who would previously have died from their serious head injuries. Sadly, these advances were not matched by parallel funding of expert rehabilitation and community-based care services, with the result that head-injured people were being discharged into the care of unprepared families or despatched to totally inappropriate institutions.

In 1979, Sir Neville Butterworth placed an advert in a national newspaper seeking holiday accommodation for his brain-injured son. Dinah and Barry Minton, themselves carers, responded and set out with Sir Neville to find any support networks that already existed.

Around the same time, two social workers, Philip Lockhart in Birmingham and Reg Talbott in Nottingham, also contacted Sir Neville. The five agreed to call a meeting for all those involved in the care of brain-injured people. A total of 23 carers and professionals attended a meeting on 23 October 1979 and Headway was born.

Headway (National Head Injuries Association) was registered as a charity in March 1980 and a management committee was formed the following year.

The birth of Headway houses

The first Headway house was opened in Gloucester in 1983, providing a day-centre to assist in long-term rehabilitation, respite care and hospital liaison. This was so successful that other Headway houses were soon started in Basingstoke, Colchester, Reading and Bristol, with many more to follow.

The Royal seal of approval

In 1985, Headway moved to new premises in Nottingham. The Hillsborough disaster in 1989 spotlighted the chronic shortage of expertise and resources in the field of brain injury and was pivotal in bringing the issues to ministerial attention, following strong representation from Headway. 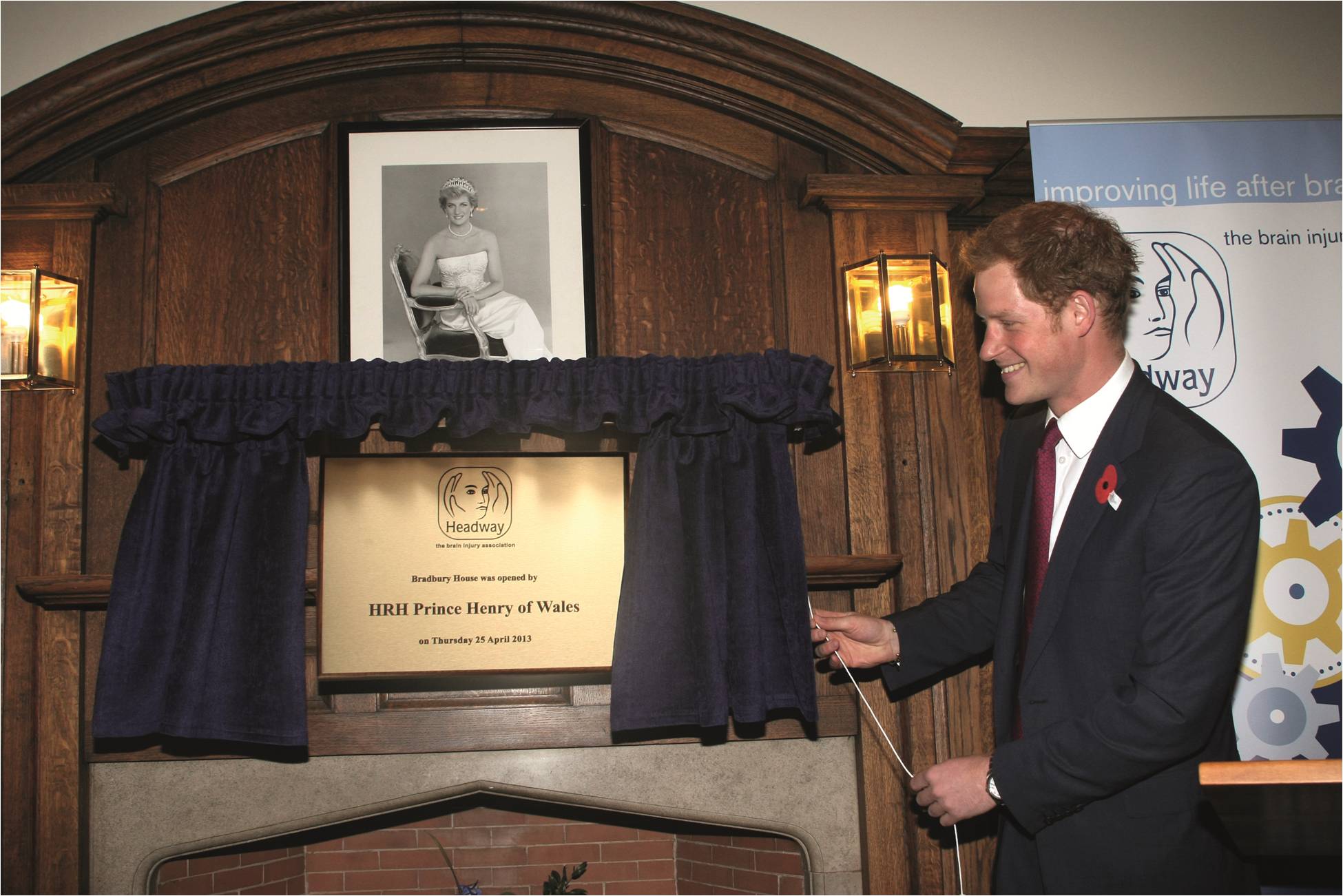 The charity's status was greatly assisted in April 1991 when HRH Diana, Princess of Wales, consented to become Royal Patron, a position which she continued to occupy until 1996.

During this period, the Princess took a very real interest in the charity's work and attended a number of Headway functions resulting in extensive media coverage and a much enhanced national profile.

HRH announced her decision to withdraw from most of her public duties at the Headway Christmas Lunch in 1993 but remained a Patron for the next three years.

Two decades later, the charity was once again honoured by royalty when in 2013 HRH Prince Harry made opening Headway’s new home in Nottingham his first ever solo engagement.

The group and branch network

In 1994, the first Brain Injury Resource Worker was appointed to work in the Scottish Borders region and the initiative was so successful that a policy of greater regional support was adopted by the board.

In 1997, the charity's groups were divided into charities in their own right (groups) and smaller local organisations (branches) operating under the national charity umbrella.

Today, there are more than 125 Headway groups and branches supporting people in their local communities across the UK, each of which works hard to raise funds at a local level to continue to provide and develop the services they offer.

A new logo was adopted in 1999 and the charity's remit was extended to include support for people suffering from other forms of acquired brain injury, such as encephalitis or meningitis. The first year of the new millennium coincided with Headway's 21st anniversary, marked by a celebration at Westminster Abbey.

As the charity grew in size, it began to play a more active role in shaping brain injury services. In 2001, Headway was instrumental in the re-formation of the All Party Group for Acquired Brain Injury and the same year made a major contribution to the House of Commons Health Select Committee Inquiry into head injury rehabilitation.

The charity's name was changed in the same year to Headway - the brain injury association.

The helpline was formally launched in 2003 and the first Headway charity shop was opened in Ilkeston, Derbyshire. Today, the helpline fields more than 11,000 enquiries a year, while there are currently 27 charity shops generating income and increasing awareness of the support on offer to people affected by brain injury.

Headway's comprehensive information service provides high-quality publications covering all aspects of acquired brain injury, from its causes and effects to practical concerns that affect many survivors and their loved ones. Headway's information resources have received been externally validated by the prestigious British Medical Association (BMA). Since 2009, we have received no less than 29 awards in the BMA's Patient Information of the Year Awards.

In 2011 the Headway Emergency Fund was launched, with support from the Stewarts Foundation, to help families and individuals cope with the practical implications of a sudden catastrophic brain injury. Since that date, grants totalling almost £500,000 have been paid to hundreds of families at a time of crisis.

As part of the Justice Project, we launched the Headway Brain Injury Identity Card to provide survivors with the support they need, when they need it, by highlighting the effects of their injury and providing access to 24-hour free criminal legal advice and representation should they come into contact with the police. The card also helps in everyday situations such as when shopping, enjoying a drink or meal out, or on public transport. For the nearly 10,000 card holders, the use of their card has been transformative in promoting their confidence and independence.

The Department for Work and Pensions (DWP) has agreed to formally recognise the Brain Injury Identity Card in all of its Job Centres to ensure that survivors of a brain injury are treated with compassion.

In 2015, we launched a new Headway website which provides one of the most comprehensive sources of brain injury information and support available. With a clear and accessible design, it allows those affected by brain injury to find out more about their condition, access the information they need and find local Headway services. It also offers a way to apply for support such as the Headway Emergency Fund and Brain Injury Identity Card.

2019 saw the launch of two further Headway websites. I'm calling about Chris is a free resource designed to help ease the burden of keeping friends and family members informed about the condition of a loved one in the acute stage of care following an acquired brain injury. Headway in memory provides families connected to brain injury with a private and secure space to share memories and support one another following the loss of a loved one.

The number of direct services provided to brain injury survivors continues to grow, as does the network of groups and branches providing vital rehabilitation and support services across the UK.

Headway has come a long way since its humble origins, when a group of families got together to support each other in helping to improve life after brain injury. Today, the charity provides more services than ever before and each year supports an increasing number of people to live with the long-term effects of brain injury.

And yet the charity still holds true to the ethos on which is was founded: Together, we are stronger and by working together, we can do more to improve life after brain injury.