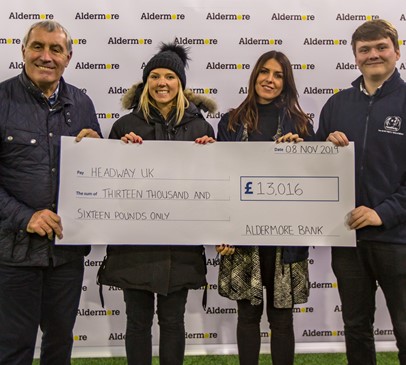 Aldermore teams up with football legend to raise thousands for Headway

Aldermore, the specialist lender, and Peter Shilton, England’s all-time record holder for the most competitive appearances in world football, have teamed up to support Headway at a special football tournament.

The 5-a-side tournament, which is now in its fifth consecutive year, raised £13,016 for Headway at a tournament held at St George’s Park in Burton–on-Trent, the home of England’s national football teams and also the Football Association’s National Football Centre.

Over the last five years more than £50,000 has been raised for charity from the football tournaments.

Tim Boag, Group Managing Director, Business Finance, at Aldermore, said: "It’s great to see so many members of the team getting stuck in for such a good cause. Headway has done some fantastic work supporting brain injury victims over the last forty years and its cause is one that we are particularly close to.”

Luke Griggs, Deputy Chief Executive at Headway, said: “We’re really grateful to Aldermore for sponsoring this event for the fifth consecutive year. Aldermore has been an important component within our 40 years of success.

"A special thank you should also go to Peter Shilton for coming to support us. The donations raised from the event will ensure more brain injury survivors and their families have access to the support they need.”

Charity of the Year