Headway hits out at fu... 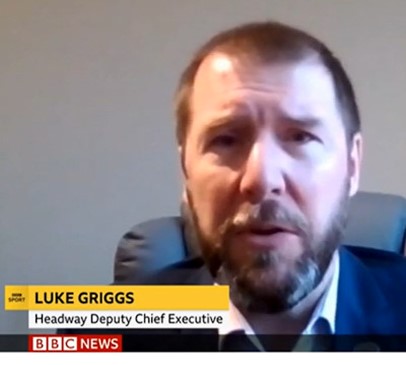 Headway has renewed its criticism of football authorities for continued delays in implementing measures to protect players from the risk of concussion and provide support to former players now living with dementia.

The recent death of World Cup winner Nobby Styles, who died in October, led to his family saying football ‘needs to address the scandal’ of dementia in the game and that there is too little support for players. Styles was the fifth member of England’s World Cup winning squad to have been diagnosed with dementia.

Meanwhile, the announcement by the International Football Association Board (IFAB) – football’s rule-making body – that trials for concussion substitutes will begin in January ‘for any competition that is interested in taking part’ have been labelled as too little, too late by Headway.

“We fully support the families of former players calling for more support,” said Luke Griggs, Deputy Chief Executive of Headway. “It’s fine to say more evidence is needed to fully understand the extent of the problem and the risk of heading a football in the modern era, but there is now an established link between dementia and football.

Why we do what we do.......💔#dementiainfootball

Soccer Saturday's Dickie Davis looks at the issue of dementia in football, and the impact it has had on former players and their families. https://t.co/viXWdcw6Qb

I can’t take back the number of balls I headed in my career now neither can Alan Shearer, Iwan Roberts and Peter Crouch and thousands of footballers across the country amateur and professional but we can make a change now to try to safeguard our children. Why wouldn’t we??

“It cannot be right that families such as the Styles and Astles, and many more besides, are having to plead for more help from the sport.”

The charity has also hit out at the latest delays to introduce concussion substitutes, which would reduce the risk of players sustaining traumatic brain injuries.

“For years, Headway has been calling for football to take concussion more seriously,” said Luke. “These calls have been met with continued procrastination and delay and an unfathomable reluctance to learn from other sports that have successfully introduced temporary concussion substitutes.

“Football showed it is capable of swift change when it introduced the five substitutes rule post lockdown in order to protect the welfare of players. The question is, if it is capable of doing so to prevent muscular injury, why would it not make immediate change to prevent brain injury?

“While we are hopeful things will finally start moving in the right direction, we are concerned at reports suggesting the trials will involve permanent substitutions rather than temporary, which would provide an opportunity for off-pitch assessments to take place.

“With the possibility of any form of concussion substitution rules not coming into play until next season in the UK, players will remain at unnecessary risk.

“All we can do in the meantime is repeat our message to players of all ages, at all levels: If in doubt, sit it out!”

Leading UK brain injury charity Headway has urged the International Football Association Board (IFAB) to reconsider the introduction of temporary concussion substitutes after a meeting of its Concussi...