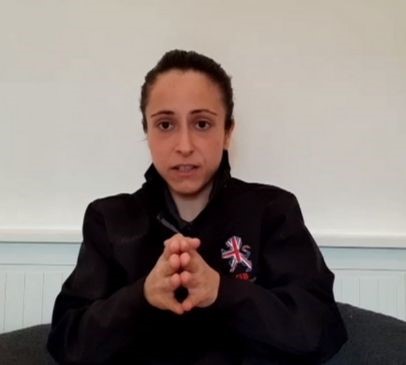 MPs have heard compelling and moving evidence from Headway ambassadors Eleanor Furneaux and Monica Petrosino on the issue of concussion in sport as part of an inquiry run by the Digital, Culture, Media and Sport (DCMS) Committee.

Eleanor represented Team GB in bobsleigh before retiring at the age of 24 following concussion, while Monica was a Team GB ice hockey player before suffering a similar injury and retired at the same age.

Their evidence followed Headway’s contribution to the inquiry during the first hearing on 9 March.

The pair were both asked to recount their experiences of head injury in their respective sports and asked what they would change to improve things for others.

Monica, who has previously shared her story on the Headway website, said: “It was my decision to retire; there was no one in a position to ‘you have to retire’.

“After my first concussion in 2015, I took a couple of years off due to the injury. In 2019, I thought to myself ‘I’ve rested long enough’ and decided I wanted to trial again for Team GB.

“I was selected but suffered numerous other hits that season, including one at the European Championships. All of the symptoms, like headaches, dizziness and not being able to speak properly all came flying back.

“Three months later, I speak with the my coaches, a sports therapist and the Team GB medical team but I was advised that no one can put a number on the amount of head injuries you can have before it’s your last one.

“The most difficult thing was that I had to make that choice to retire.”

Eleanor’s evidence also pointed to a lack of awareness and understanding in sport of concussion. She shared experience of concussion, which you can read in full here, with the committee, including recalling the incident that led to her quitting the sport she loved in 2018.

Eleanor had been competing in Germany when she had two knocks in three days. The first resulted in her helmet being cracked. But rather than having it replaced by Team GB, Eleanor simply spent the evening sanding it down to buff out the crack.

DCMS Committee Chair Julian Knight MP was understandably surprised by this, asking Eleanor to confirm that Team GB did not replace her helmet. “No,” replied Eleanor. “We buy our own helmets and from my awareness I’m not sure they actually carry spares.”

Eleanor went on to explain that she did not do a concussion assessment in the evening following the initial head injury during the event in Germany.

“I spoke with my coaches, who were obviously aware of the knock but said they would give me the benefit of the doubt. I knew I needed to train in order to be in the best position for the race on the Friday.

“I felt fine by Friday. I got half way down the course with a lot of speed – more than I was used to – and ended up skidding out of control. I ended up going into this particularly corner very late, very badly, and I remember looking up very slightly off the ice just to see what was going to happen.

“My head then hit the ice and everything went black. I can’t really remember the rest.”

Like Monica, Eleanor has concerns regarding awareness of concussion within sport. “There’s a lack of education,” she told the inquiry. “I wasn’t necessarily aware of the real dangers of concussion until after I’d experienced it myself.

“I know a number of athletes in skeleton who believe that greater awareness of concussion in sport is potentially damaging and going to ‘ruin the sport’. I don’t see it as that – but had I not experienced it myself I probably would have.”

The athletes were then asked if they would have preferred to have someone else with them to make decisions regarding their ongoing participation following concussions. Both agreed that they would and, had that been the case their outcomes may have been better.

“There is no formal training for coaches on head injury or concussion,” said Monica, who is now on the Team GB coaching staff for women’s ice hockey.

“As a coach, I have to do a safeguarding course. I should also (be required) to do a head injury awareness course, as should all coaches at amateur and GB level.”

The session ended with the committee asking Eleanor and Monica if they fear for their futures on the back of greater understanding and research linking concussion with long-term neurological conditions.

“I do,” said Eleanor. “I don’t like to think about it because in my opinion the damage is already done. That sounds really tragic, but the head injuries have happened.

“With all the recent information coming out about later on in life after having multiple head injuries, yeah, it does worry me.”

In a moving conclusion, Monica provided a deeply personal insight into her own recent health developments. “Very recently, I got admitted to hospital due to some left-sided weakness and loss of continence. I’ve been referred to neurology in order to test for multiple sclerosis.

“It was the biggest shock of my life when they said to me that ‘have you ever hit your head at any point? Have you ever had a traumatic injury?’ and I obviously spoke about my concussion.

“When they told me that I think you’re 22% more likely to have conditions like that – and they haven’t confirmed it yet – but purely based on the fact that said it’s absolutely something that could influence it I’m now having to, number one, accept that fact that it could be (MS), but for me a huge thing is that that (knowing the risk) could have been a huge difference between me getting back on the ice and not getting back on the ice.

“I wish someone had stopped me before it might have been too late.”

Former GB skeleton athlete Eleanor Furneaux, 27, had high hopes of following the footsteps – or sled tracks – of Olympic heroes Lizzy Yarnold and Amy Williams. But with her shot at glory in sight, a devastating head injury caused her to park her aspirations and retire at just 24 years old.

Monica Petrosino dedicated almost 20 years to ice hockey and ascended to the elite level of playing for Team GB, but her dreams were tragically dropped when a serious concussion forced her to accept r...