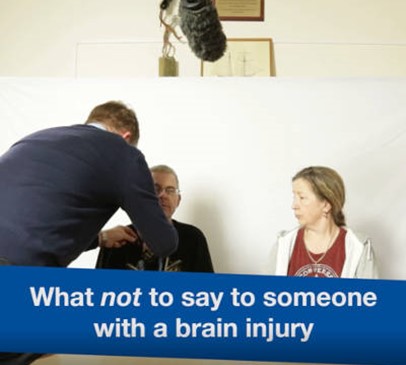 Imagine if you were living with a hidden disability that impacted your ability to do the most basic things most of us take for granted. Challenging, right? Then imagine someone telling you that you must be faking it.

Our new campaign hopes to dispel myths and misunderstandings about brain injury through the publishing of a list of the top ten things not to say to someone living with the effects.

A lack of awareness about brain injury, partly as a result of its often hidden nature, can result in well-meaning comments causing offense, according to brain injury survivors contributing to Headway's research.

The list was compiled by Headway in consultation with its members across the UK and has been released as part of the charity’s A New Me campaign, which aims to highlight how lives and futures can change in an instant as a result of brain injury.

What not to say to someone living with a brain injury:

Andy Nicholson, from Lincolnshire, sustained a brain injury after falling headfirst down a 20ft drop on a building site while working in Germany in 1994. He said he recognised all of the points raised on the list.

He said: “I’ve heard all of them over the years and they can really be hurtful at times. There is still a lack of awareness about brain injury in our society and it is very concerning.

“For me fatigue is a big issue, so when people make passing comments making light of me being tired, I find it very frustrating. Being so fatigued that I’m tired the instant I wake is not just in my mind. I wish it was.

“Having to concentrate more than non-brain-injured folk on everyday tasks as mundane as simply walking or talking is hard to explain and can be very hard going.

“Hopefully with more campaigns like A New Me, more people can talk about the issues that affect brain injury survivors and break down these misconceptions.”

Peter McCabe, Chief Executive of Headway, said: “Living with a brain injury presents a wide range of challenges, but one of the most difficult things for many survivors is the lack of understanding from the people around them.

“We hope by sharing these examples, and giving a stronger voice to those living with the long-term effects of brain injury, we can help increase awareness around common misconceptions that can add to the frustration of living with a complex and often invisible condition.”

Find out more on our full 10 things not to say to someone with a brain injury article.

Many thanks to all those who contributed to this film:

The film was produced by Purple Flame Media.