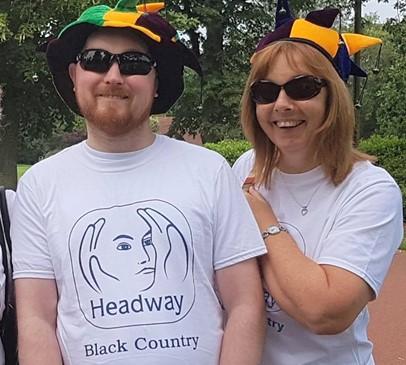 A mother from Dudley, who has not only dedicated the past eight years to caring for her son after he sustained a life-changing brain injury, but who also helped set up a support group to care for others, has been shortlisted for a national award.

Jackie Flavell will be recognised at an annual awards ceremony organised by Headway – the brain injury association, as one of just three people from across the UK in the running for the title of Carer of the Year, sponsored by Barr Ellison Solicitors.

“I was really shocked and touched when I got told I was a finalist for such a prestigious award. It was a lovely moment,” said Jackie.

Jackie’s son Luke sustained a traumatic brain injury in July 2012 when his car skidded and crashed into a lamppost during a heavy rainstorm.

Luke was in a coma for nine days and his parents were told three times that he was going to die. Against all odds, and after intense treatment, he pulled through but had to spend a further eight months in hospital where he relearnt all the basic things in life, such as how to walk and talk.

When Luke finally returned home it was clear life would never be the same and it took him a while to come to terms with the cognitive and physical effects of brain injury. Thankfully, his loved ones and family rallied around him, especially his mother Jackie who became his full-time carer.

Thanks to this care, and the support of local charity Headway Black Country, Luke is now living independently and looking forward to the future.

Jackie said: “I’m hugely proud of Luke. To see how far he has come fills me with such admiration for him.

“Life has been tough over the past few years but you have to just keep on going. You have to learn to really enjoy the good days, and when the bad days come, and they do, you have to keep going, always remembering the good times will be back.”

Even though caring for Luke put a massive strain on Jackie, she found the time to support others at Headway Black Country’s Carer’s Support Group, fundraise for the charity and even co-founded another support group aimed at friends, family and survivors of brain injuries. It now has more than 50 members.

She said: “Headway has a been a lifeline to me and my family. Having a place where you feel comfortable to open up and share your worries with people who truly understand has been vital. That is why I help there as much as I can, because I realise how crucial its support to families is.”

Jackie was nominated by her friend and supporter of Headway Black Country, Kerry Foster.

She said: “Jackie is a very special lady and is always looking at ways to help others.

“Despite all the pressures she has, she found the energy and time to set-up a social support group for anyone affected by brain injury. Her passion to make this successful was endless and it’s now coming up to its second year.

“Not only that she volunteers at her local Headway branch and is also a very influential member of the Carer Support Group – where she offers ideas and support to others who attend.

“She is always the first to support any carer activities and training in the hope of reaching others who find themselves in a similar situation.

“Jackie is also part of a fundraising group for the local Headway group and has many brilliant ideas to help raise money, including a very successful quiz night with a fish and chip supper which she helped to organise and which raised £500.

“Jackie has a whole load of her own problems but always makes time for each and every one of us, nothing is ever too much trouble, she is an inspiration and a true and loyal friend - everyone needs a Jackie in their lives.”

Each year, Headway Annual Awards celebrates the exceptional efforts of survivors of brain injury and their carers.

Jackie will discover if she is to be named Carer of the Year at a glittering ceremony at a star-studded ceremony at the InterContinental Hotel in Mayfair, London, Friday 6 December. Awards for Achiever and Volunteer will also be presented, alongside the Stephen McAleese Outstanding Contribution to Headway Award.