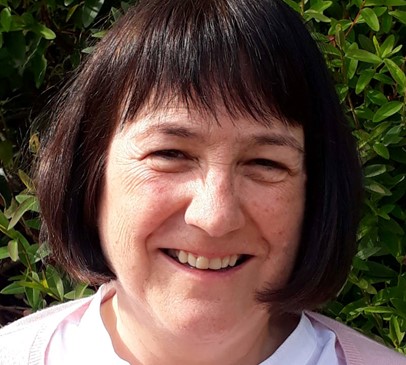 A Sussex-based volunteer whose life has been dramatically affected by brain injury has been nominated for a national award after generously giving her time to help fellow survivors.

Gillian Richards, 58 and originally from Cornwall but a Brighton resident for over 30 years, is one of just three finalists from across the UK to be shortlisted for the title of Volunteer of the Year at the national brain injury awards ceremony organised by Headway – the brain injury association.

The winner of the accolade, which is sponsored by Anthony Gold Solicitors, will be announced at the awards luncheon on 6 December at the InterContinental London Park Lane, Mayfair.

Gillian said: “I was deeply touched when I found out I had been nominated for Headway’s Volunteer of the Year Award.

“For me, it’s not just recognition of what I’ve managed to do, but of the work of my clients, their families and my colleagues, along with the support of my own family, friends and healthcare specialists.

“It’s a real honour to be recognised for the work we’ve all done within and beyond the community of people affected by acquired brain injury in East Sussex."

Gillian’s first experience of brain injury began as a teenager when her grandmother suffered a stroke. Gill and the rest of her family spent many years caring for her and learning to come to terms with the effects of the injury.

In 1997, Gillian once again experienced the devastating consequences of brain injury after she herself was diagnosed with post-concussion syndrome.

She was swimming at a local leisure centre when she hit her head on the pool wall.

“I knew something was wrong as soon as I pulled myself up out of the water,” said Gill. “I felt very dizzy and kept drifting in and out of consciousness.

“I spent the next few years feeling incredibly dizzy and sick, often sleeping for 20 hours a day.”

Prior to her injury Gill had worked as an Educational Team Manager, but the fluctuating and often hidden effects of her injury meant that she was unable to return to her much-loved job.

“Although I didn’t know it at the time, that injury would prove to be life-changing,” she said. “I loved my job so much and I’d been adamant that I’d be able to return.

“It took me about two years to really get used to the effects of my injury and accept that my life had changed. It was difficult to come to terms with the fact that I couldn’t do the things I used to be able to do.”

In the years following her injury, Gill’s mum suffered a stroke and her close friend was diagnosed with a cancerous tumour on the brain.

Gill said: “I’ve spent a lot of my life caring for and supporting those with an acquired brain injury and I wanted to use my knowledge and experience professionally to help others going through the challenges they faced.”

More than a decade on from her accident, Gill recovered enough to consider new career opportunities.

In 2009, she started training as a counsellor and later in 2011 became involved with the brain injury charity Headway East Sussex, where she worked with survivors and their loved ones as part of her placement.

In 2012, Gill went on to qualify as a professional counsellor and has since provided voluntary services to the charity’s clients and carers both on a one to one and group basis.

In addition to this, as a dedicated volunteer, she has supported numerous events at Headway East Sussex, as well as contributing to professional development programmes for trainee counsellors, facilitating workshops at the bi-monthly acquired brain injury forum, and delivering inspirational speeches to fellow survivors. She regularly gives up her time and energy to help those less able.

By her own admission, Gill’s voluntary role can be challenging due to her need to manage fatigue, yet through careful pacing and organising her working environment, she has been able to combat the effects of her injury.

Gill said, “Of course, the team at Headway are particularly understanding about this.

“I have my own understanding and experience of brain injury, especially in regards to the hidden effects, which helps me to better support other survivors and their carers, whilst recognising that every brain injury is different and unique.

“I find it inspiring to help enable people to become determined to make the most of what life has to offer. Clients work towards creating a meaningful and purposeful future for themselves and being part of that journey is an incredible privilege.

Gill was nominated for the Volunteer of the Year award by Michele Fleming, a Trustee at Headway East Sussex.

Michele said: “Gill has helped so many people at Headway East Sussex, not only within her professional capacity, but through her kind, understanding and generous nature.

“Through using her own experience with brain injury, Gill is able to connect with the clients and build positive relationships. She’s made such a positive impact on so many people’s lives and I know that her dedication is valued and appreciated by us all.”

“She really is an unsung hero and winning this award would be an excellent way of recognising all her hard work!”

The Volunteer of the Year will be named at a glittering ceremony at the InterContinental London Park Lane, Mayfair on Friday 6 December, along with awards for the Achiever and Carer of the Year, and the Stephen McAleese Outstanding Contribution to Headway Award.