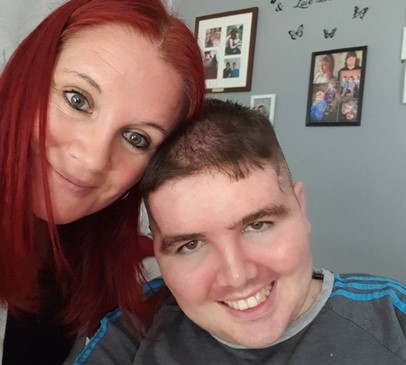 A mother from Worcester who fought tirelessly to ensure her son got the best possible care following his brain injury has been shortlisted for a national award.

Janie Ferrier, 44, from Brickfields in Worcester, will be recognised at an annual awards ceremony organised by Headway – the brain injury association, as one of just three people from across the UK in the running for the title of Carer of the Year, sponsored by Barr Ellison LLP.

Her son Nick was 22 when he sustained horrific traumatic brain injury after crashing into a brick wall while riding his quad bike. The accident left him unable to speak, walk, move or feed himself. He is completely dependent on his mum.

Janie was forced to have a lot of time off work initially so she could be at his bedside at The Queen Elizabeth Hospital, then reduced her hours on returning to work so she could still visit Nick in Leamington Spa Rehabilitation Hospital.

More recently she has given up work to become his full-time carer. She was initially told that Nick would have no quality of life but after two years of hospital treatment, and with some signs of improvement, he was eventually moved to a care home.

However, this was unsuitable for Nick as it was a geriatric care home and not geared-up for a young disabled man.

Janie started the Help Get Nick Home campaign to make sure her house was adapted to meet his needs and enable him to live with her.

Thanks to the campaign, Janie’s dream was finally realised and Nick, 27, now lives at home in a place which enables him to live a better standard of life.

Janie said she was shocked when she found out she had been nominated for the award.

She said: “It has been heartbreaking to see what has happened to Nick and to have had to be his voice throughout this ordeal. Nick is the eldest of my four children, and it has changed all of our lives, but you just have to get on with it. I’m his mum so it just comes naturally to me, you just want the best for your children and so you keep pushing onwards.”

Janie was nominated for the award by Mandie Fitzgerald, a Fundraising and Marketing Manager, from brain injury charity Headway Worcestershire.

Mandie said: “Janie will never give up her fight for Nick and she is rightly very proud of her boy and how well he has come on since the horrific crash. She is one of our unsung heroes with the fight of a lioness. I’m thrilled that she has been nominated and will spend a special day with everyone at the event in London.”

Each year, Headway Annual Awards celebrates the exceptional efforts of survivors of brain injury and their carers.

Janie will discover if she is to be named Carer of the Year at a glittering ceremony at The InterContinental Hotel, in Mayfair London, on Friday 6 December. Awards for Achiever and Volunteer will also be presented, alongside the Stephen McAleese Outstanding Contribution to Headway Award.