Donate Join
Home News and campaigns Campaigns Speaking up for you 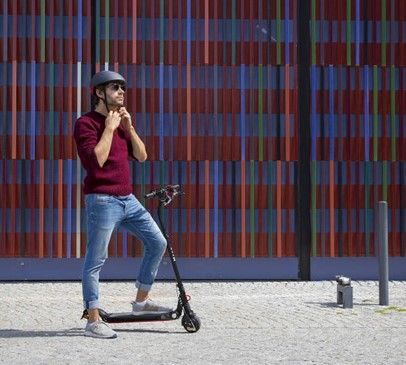 The Transport Select Committee has recommended to the government that privately owned and rental e-scooters should be fully legalised on public roads, despite concerns over the safety of riders and pedestrians.

Headway, which contributed to the committee’s consultation, has expressed concern over the recommendation and its timing, with 12-month trials to assess e-scooter safety still ongoing.

Reports from America suggest that from 2014 to 2018 more than 39,000 people in the US were injured whilst riding e-scooters. In the UK, three people are already known to have died using them, with hospitals reportedly treating an increasing number of e-scooter-related casualties, including those sustaining brain injuries, among riders and pedestrians alike.

We are pleased to see the committee endorse the use of helmets in saying, ‘it is important […] that e-scooter operators involved with the trials encourage users to wear helmets, and where possible, operators should provide them. Should privately owned e-scooters be legalised for use on roads, the Department should likewise encourage helmet use.’

Headway believes that all e-scooter riders should wear a helmet, particularly as evidence from Denmark suggests that the rate of e-scooter rider injuries was eight times higher than for cyclists.

We understand the long-lasting impacts of brain injury on survivors and their families. With one brain injury occurring every 90 seconds in the UK alone, anything we can do to limit the number and severity of brain injuries is vital.

In July, the government made it legal for rented e-scooters to be ridden on roads in 30 UK towns or cities for a 12-month trial period. The trial period represents an important phase in being able to adequately gather evidence about e-scooter safety and the effect they have on traffic and transport in trial locations.

However, the trial in Coventry was paused after just five days due to e-scooter riders illegally mounting pavements and causing danger to pedestrians.

It is clear that robust enforcement will be required to deter illegal activity, but it what is less clear is how this enforcement will be delivered. Headway agrees with the recommendation of the committee that ‘the Department [for Transport] should clarify how it intends to monitor whether e-scooters during the rental trials are being ridden on pavements and the number of users penalised for this offence and that it has evaluated and identified effective measures to eliminate such antisocial behaviour’.

There is a real danger of collision and serious injury if this requirement is flouted, particularly given the speed these vehicles can reach and their weight, which the government’s criteria allow to be as much as 55kg. For certain populations, such as the elderly, those with sight loss or impairment, or mobility issues, including brain injury survivors, shared space with e-scooters provides a significant risk of harm.

Headway welcomes the recommendation of the committee on this, which suggested: ‘The Department [of Transport], working with local authorities, should closely monitor the trials to determine whether any problems are developing with scooters being left on pavements as ‘street clutter’. If so, the Department will need to trial and evaluate whether stronger regulation to specify where users must deposit rental e-scooters after their journey is effective in eliminating these problems. This ought to be done before making a decision on whether to legalise rental e-scooters on a more permanent basis.’

It must be considered, however, whether local authorities will have the capacity and resources to monitor and evaluate this effectively. Given the well reported financial challenges local authorities are facing, it is important the government provides additional support to councils to ensure a robust evaluation process is undertaken.

It is vital that these trials be allowed to reach their conclusion without any predetermination of the safety and operation of e-scooters. Only when the trials have finished and the evaluations complete should any decision about their legality be reached.

Headway considers it vital that brain injury survivors and others with long-term conditions or disabilities continue to be consulted about the use of e-scooters. The committee was clear that ‘while we support the Government’s desire to enable companies and users to take up this new innovative and environmentally friendly form of transport, this should not be to the detriment of pedestrians, particularly disabled people.’

Headway has given evidence to the Government’s Department for Transport (DfT) on how to make e-scooters safer ahead of trials which started in July to test their use on the roads.

Headway was invited to talk on This Morning about e-scooter safety.

Wendy is passionate about making e-scooters safer after she fell off one and sustained a brain injury.