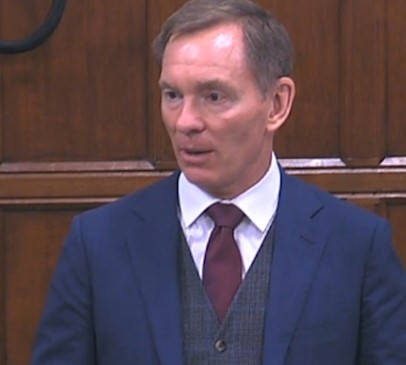 Addressing the Minister of State for Care, Helen Whately MP, Mr Bryant said that more must be done to support brain injury survivors in the community.

He laid out a series of “demands” of government which included the creation of a national neurorehabilitation strategy and requested “a guarantee from the Government that all those [neurorehabilitation] services and more will be reinstated” following the pandemic.

Mr Bryant highlighted the variation in people’s ability to access rehabilitation services across the country, saying he wanted a “consistent and tidy arrangement of community neurorehabilitation across the whole country, so that whether someone is in Wells, in Winchester or in the middle of Manchester, they and their family or loved ones have the same right to access ongoing community rehabilitation.”

He also highlighted his appreciation for the work done by Headway and recognised the scale of the financial challenge we are facing as a result of the pandemic. He said: “Headway is also a wonderful organisation, although like many charities in this field, it is having a really difficult time this year.”

In her response to Mr Bryant, Helen Whately MP, Minister of State for Care praised the contribution of Headway groups and branches from across the country saying: “I recognise the vital work of charitable organisations such as Headway […]. Their work is invaluable not only in raising awareness but in providing hands-on help and support to patients, families and carers.”

She also confirmed, in response to another of Mr Bryant’s demands that a national neurorehabilitation lead be appointed, there was a temporary lead for the duration of the Covid outbreak. Ms Whately said: “Suzanne Rastrick has been designated the National Clinical Director for ​Rehabilitation, co-ordinating clinical advice and leadership in that area. That is for the period of Covid.”

You can watch the Minister’s response here.

Commenting on the debate, Sarah Russell, Public Affairs Manager at Headway, said: “We are very grateful to Chris Bryant and his colleagues on the APPG for acquired brain injury for their continued work in this area.

“The impact of this pandemic on brain injury survivors and their families cannot be underestimated. In a survey conducted with survivors we found that 57% of those who sustained their injury in the last two years said their rehabilitation had been negatively affected.

“We are pleased that the work done by our groups and branches across the country in supporting brain injury survivors has been recognised by the Minister. But we hope that more can be done by the government to support the continuation of these vital services in our communities.”