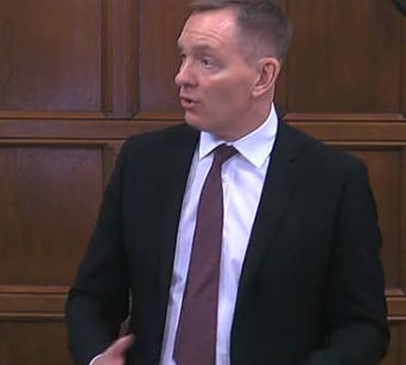 MPs from across the political spectrum took part in a debate in Parliament about acquired brain injury yesterday.

MPs from across the UK took part in the debate and showed a depth of knowledge on the wide-ranging issues that surround brain injuries, such as carbon monoxide poisoning, funding for Headway groups and branches, stroke, sports related injuries - including heading in football, cycle helmets, welfare benefits, hospital car parking and the criminal justice system.

We would like to thank Chris Bryant MP, Siobhain McDonagh MP and their colleagues on the APPG for Acquired Brain Injury who spoke so passionately about the issues that affect brain injury survivors and their families every day.

Mrs Sharon Hodgson, MP Washington and Sunderland West, Labour, said: “I thank the charities working in this field for their invaluable work to support people with acquired brain injuries and their families. I also give special thanks to Headway Wearside, which goes above and beyond for people in my region in the north-east, especially for people in my constituency. Headway Wearside has given me a lot of help over the years with constituents’ cases.”

The Minister for Care, Caroline Dinenage, Conservative, said: “I have had quite a long-standing involvement with Headway in my region of Portsmouth and Gosport.They are remarkable and offer the most fantastic support to people in my area. They certainly make a difference to people’s lives and they are so inspiring.”

Siobhain McDonagh, MP for Mitcham and Morden, Labour, said: “The help provided by Headway is seen as a lifeline to those who receive it, whether through its helpline—inquiries to which have more than doubled in the past decade; through the provision of free, award-winning publications to help people understand and adapt to life after brain injury; or through grants distributed via its emergency fund.

“Many members will also testify to the exceptional work done by Headway groups and branches in their own constituencies. The APPG report rightly calls for a national review of neurorehabilitation to ensure that service provision is adequate and consistent throughout the UK. This report must not confine itself to acute care settings. Headway groups and branches are under severe financial pressure as a result of cuts to local authority budgets. The fact that they continue to provide such vital support, through rehabilitative therapies and social interaction programmes, is a testament to their determination to support this vulnerable community.

“Let us be clear: the pressure under which Headway groups operate must be eased, and they must be afforded the funding they need to continue to support people who may otherwise be cut adrift from society. Time for Change also calls for improvement to how the criminal justice system meets the needs of brain injury survivors. In a previous debate on acquired brain injury, I highlighted Headway’s brain injury identity card, which helps to identify brain injury survivors when they come into contact with the criminal justice system. To date, more than 7,000 cards have been distributed to vulnerable adults in the UK.”

He said: “I want to thank Headway. I had an amazing day speaking at the Headway conference last year. I have referred to some of the professionals, but the most amazing people are probably those who have been through a version of hell that none of us would ever want to experience, having sometimes lost significant members of their family as well.

“I remember one woman said to me, “I know I have to use all the energy in my head to make my head better, but I am using all the energy in my head to try to work out this DWP form.” That is not what the state should be doing. That is when we really do want a nanny-state to help, to sustain and to support. All too often, of course, it is charities that provide exactly that, and I pay an enormous tribute to Headway for the work it has done.”

Sir John Hayes, MP for South Holland and The Deepings, Conservative, spoke about the need for collaboration to help brain injury survivors receive the neurorehabilitation they require.

He said: “My own university, Nottingham, is doing important work on both the primary science of the subject and the psychological effects of injury. I hope that the all-party group will go to Nottingham to take a closer look. When the Government work with the higher education sector, they can drive forward public policy changes resulting from important work on assessing the effectiveness of different approaches by public sector, private sector and charitable organisations, such as Headway, of which I am a patron.”

He also spoke about our campaign on hospital car parking charges.

He said: “Perhaps the Minister cannot commit now to abolishing car parking charges, but I am sure that the Government will do so because we campaigned for that all the way through.

“No distinction should be made between one type of case and another; people who need to be by their loved one’s bedside should not be paying car parking charges. The NHS was designed to be free at the point of delivery, and that includes car parking for people in that position.”

Read the transcript of the debate, or watch in full on Parliament TV.