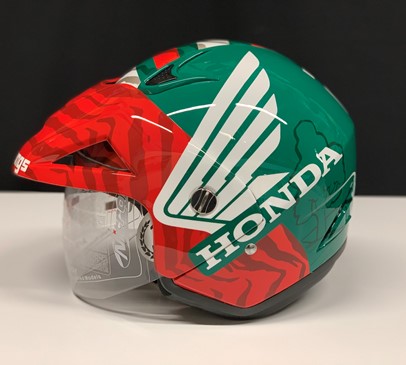 Honda (the manufacturer of the world’s first ATV) has teamed up with some of the world’s best known farming, rugby and superbike stars, to raise awareness of the importance of wearing helmets when operating ATVs and utility vehicles.

A recent poll carried out by Honda and farming twitter account @FarmersoftheUK, found that 66 per cent of ATV users ‘never’ wear a helmet, and only 20 per cent ‘sometimes’ choose to wear one. Just 14 per cent answered that they ‘always’ wear a helmet, despite the deaths of 25 farm workers and two children in ATV incidents over the past ten years. The Health and Safety Executive said that it had investigated 28 fatalities involving ATVs in the past decade, of which 11 led to prosecutions.

As a result, Honda has launched their Headstart campaign which has seen ambassadors designing a custom ATV helmet, which will be auctioned to raise funds for Headway - the brain injury association, and Farm Safety Foundation’s Yellow Wellies, a charity dedicated to supporting the physical and mental well-being of UK farmers and agricultural workers.

If you would like to get your hands on any of theses one-of-a-kind Nitro helmets, either ‘buy it now’, or submit your most generous offer before 29th March 2020. If the helmet hasn’t been bought outright before the listing closes, they will accept the highest offer.

Click here to make your best offer or buy it now