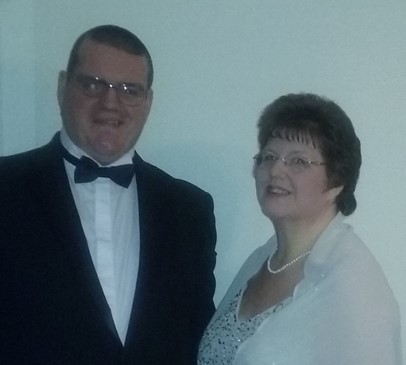 A mum-of-two from County Durham who not only found time to support her son following a traumatic brain injury, but also set up a charity to help other survivors has been shortlisted for a national award.

After a road traffic accident in 2004 left her son with a traumatic brain injury, Angela Caulfield decided to set up a support group in Durham. The group, which eventually became Headway County Durham, provided support for brain injury survivors and their loved ones.

15 years on, Angela, 54, has been nominated as Volunteer of the Year, sponsored by Anthony Gold Solicitors at the national brain injury awards ceremony.

She will join just two other nominees from across the UK at a glittering ceremony organised by Headway – the brain injury association on 6 December at the InterContinental London Park Lane, Mayfair.

The vehicle veered of the side of the road before crashing into a fence. John was left with a near-fatal brain injury, as well as numerous facial injuries. He spent a month in and out of intensive care, fighting for his life in a coma.

When he woke, John had to relearn the most basic of skills, such as walking and talking. Thankfully, he was able to access specialist rehabilitation during his time in hospital.

However, it was upon John’s discharge that he and his family began to realise the struggles of accessing appropriate support within the local community.

Angela said: “John had incredible care and support while he was in hospital in Newcastle, but when we came home to Durham there was hardly any understanding of brain injury or access to ongoing rehab.”

It was this lack of local support that drove Angela to start up a steering group which would bring together other brain injury survivors and their loved ones.

From initially small beginnings, the charity now delivers a wide range of services across multiple sites, ensuring those affected by brain injury have the opportunity to access proper support.

From weekly drop-in sessions to holistic therapies, members at Headway County Durham are able to learn new skills, meet likeminded people, and work towards the common coal of improving life after brain injury.

Angela is now the Chair of the charity, and her son John is able to make use of the support and services on offer.

As a way of recognising Angela’s efforts, Emma Gaudern, Trustee of Headway County Durham, nominated her for the Volunteer of the Year award.

Emma said: “Angela works tirelessly for the benefit of those at Headway County Durham. As both a professional caregiver and mother of a son with a brain injury, it’s amazing that she still finds the time, energy and desire to help others in her time off.

“Headway County Durham would be lost without Angela and we count ourselves lucky to have someone with kindness, humour and experience in equal measure.”

The Volunteer of the Year will be named at a glittering ceremony at the InterContinental hotel in Mayfair along with awards for the Achiever and Carer of the Year, and the Stephen McAleese Outstanding Contribution to Headway Award.