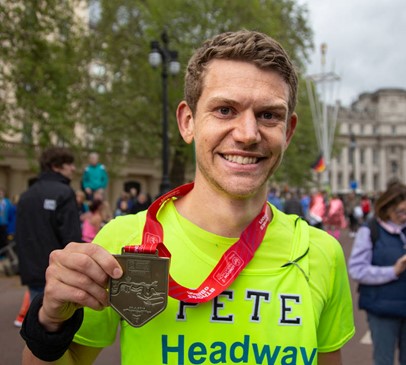 An inspiring man from Bromley who overcame the odds to fundraise for the charity that supported him following a brain injury has been nominated for a national award.

Peter Brown, 29 and from Orpington, was travelling home in February 2018 when he experienced a subarachnoid haemorrhage – a bleed between the layers of the brain and the skull.

It was a typical Saturday for Pete – he had spent the day playing football, followed by drinks in the local pub with his teammates. Having said goodbye to his friends, Pete headed home, unaware of what would happen next.

Shortly after setting off, Pete was found at the bottom of a train station staircase. Still to this day he can’t remember what happened, all he’s been able to do is piece together the information he’s been told by others.

Pete had broken his eye socket and almost bitten through his own tongue. However, it was the injury to his brain that would prove most life-changing for him.

Pete was rushed to hospital and placed in an induced coma to help stabilise his condition. The outcome was unknown at this stage and his friends and family feared the worst.

Despite the severity of his injury, Pete woke from a coma after 24 hours and was quickly transferred from the intensive care unit to a high dependency ward.
In the early days, he struggled with short-term memory loss and was unable to recall the day’s events. On top of that, he was experiencing communication problems, chronic fatigue and mobility issues.

Headway – the brain injury association was able to help Pete’s family during a tough few months.

“When I had trouble communicating, staff at Headway were able support my family,” said Pete. “They reassured them that what I was going through was normal within the recovery phase.

“Headway was also there for me as I began to learn more about the effects of my injury. I relied on the advice and support of the helpline staff – the service was so helpful.”

To everyone’s surprise, Pete was discharged from hospital after just two and a half weeks. He began a return to work programme and was able to return to his role as a Bank Manager on a full-time basis just a few months later.

Just over a year after the accident, and three weeks after he got married, Pete ran the London Marathon to show his support for the work of the national brain injury charity.

Pete said: “I ran the London Marathon for Headway because I wanted to give something back. The charity had done so much for me and my family during my recovery. It’s just an incredible cause.

“Not only that, but I also wanted to prove to myself that I could still do the things I used to be able to do. The London Marathon felt like the perfect challenge for me.”
As well as focusing on his own recovery, Pete felt passionately about supporting and inspiring others at the same time.

This prompted him to keep a blog as he built up to the London Marathon - Brain injury - a marathon not a sprint. In the blog, Pete detailed the highs and lows of training for such a physical challenge with a brain injury.

It was Pete’s dedication that earned him his nomination as Achiever of the Year at Headway’s annual awards ceremony.

The winner of the accolade, which is sponsored by Slater & Gordon Lawyers, will be announced at the awards luncheon on 6 December at the InterContinental London Park Lane, Mayfair.

“It was all a bit of a shock when I found out I had been nominated,” said Pete. “It’s so amazing to be recognised for my efforts to help Headway and raise awareness of brain injury.

“There are so many people doing amazing work to help improve the lives of brain injury survivors and to be appreciated as one of those people feels great!”

Pete was nominated for the Alex Richardson Achiever of the Year Award by his wife, Nina.

She said: “I nominated Pete for this award because it’s been inspiring to see everything he’s overcome. He’s gone on to achieve so much following his injury, and I’m immensely proud of him.

“To start with, it was really touch and go as to whether Pete would recover or even survive. But he was so determined to overcome the effects of his injury and had such a positive mindset.

“This award would mean so much to Pete!”

More than a year on from the accident, Pete and Nina are now expecting their first child together.

Pete will find out whether he will win the Alex Richardson Achiever of the Year Award, sponsored by Slater & Gordon Lawyers, on Friday 6 December at the InterContinental London Park Lane, Mayfair.

Awards for Carer and Volunteer of the Year will also be presented, alongside the Stephen McAleese Outstanding Contribution to Headway Award.