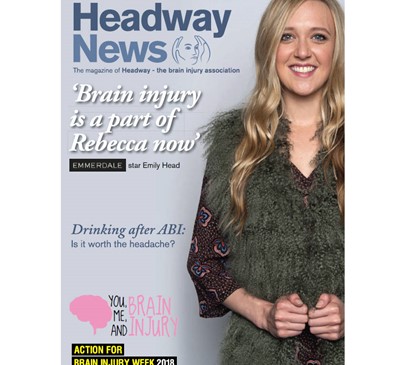 The summer 2018 issue includes Emmerdale actress Emily Head; You, Me, and Brain Injury; Alcohol and ABI; The Express joins parking campaign and much more.

During last year’s Action for Brain Injury Week we launched our A New Me campaign, which highlighted the personality changes that can occur as a result of brain injury.

If a brain injury can alter the very essence of you, is it not perfectly natural to assume it will have an impact on your relationships with all those around you?

Relationships can be complex for all of us, but even more so if you are directly affected by brain injury – as so perfectly highlighted by this year’s ABI Week campaign You, me, and brain injury.

More than 1,000 people took part in our relationships survey. Importantly, it was not just survivors who took part but also their partners, siblings, friends and colleagues.

What resulted was a fascinating insight into how relationships can be damaged or lost, but also strengthened and found after brain injury. Check out our findings on pages 16-23, where you’ll also find a roundup of what else took place during ABI Week – including some fabulous Hats for Headway Day photos!

But it isn’t just Headway tackling the topic of relationships after brain injury. Emmerdale fans among you will be well versed in the travails currently being endured by Rebecca White, played by actress Emily Head. Rebecca sustained a brain injury in a road traffic collision on the popular ITV soap and is now battling to rebuild her life and relationships.

We have a proud tradition here at Headway of trying to help script writers, directors and actors portray brain injury on screen in as accurate a manner as possible.

Whether contributing to Shaun the Sheep: The Movie, Ben Price’s portrayal of brain injury survivor Nick Tilsley on Coronation Street, or more recently Paddy Considine’s film Journeyman, we aim to help creative works be based on reality and not fiction.

So when the Emmerdale team approached us for help, we were happy to assist.

And it’s so far, so good with Emily’s version of life after brain injury. As you’ll see on pages 10-13, Emily and the Emmerdale team are determined to do all they can to tell it as it is. It will never be perfectly accurate – after all, what in soap land is completely true to reality?

Perhaps the real question should be: how can we expect a soap to portray the effects of brain injury when the impact varies so widely from family to family? Ultimately, if Emmerdale can complement our campaign by raising awareness and getting the conversation going, surely it’s a positive step forward.

You can download Headway News in the related resource section below.