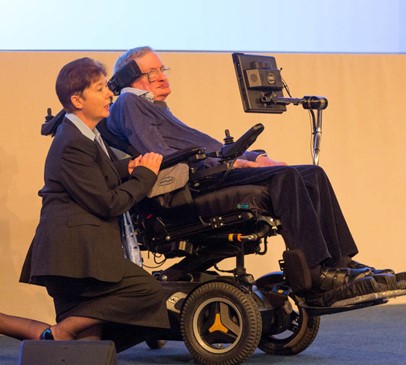 World-renowned physicist Stephen Hawking today appeared as a guest speaker at a neurological conference, hosted by the charity Headway Suffolk.

During his captivating speech, Professor Hawking, 74, told a packed conference hall how he was diagnosed with motor neurone disease more than 50 years ago.

He said: “In my third year in Oxford, I noticed I was getting clumsier. I fell over once or twice and couldn’t understand why. I was somewhat disgruntled to be told at the time to lay off the beer but I suppose it was understandable when talking with a student.”

A year later, aged 21, he suffered another fall. It was at this time that he was told the condition could not be treated and would only get worse. However, due to him not wanting to ask questions at the time and the doctors not being clear with him, it wasn’t until a few years later that he finally learnt he actually had motor neurone disease.

He said: “The realisation that I had an incurable disease was a bit of a shock. I felt it was unfair that something like this could happen to me. I had no idea what my future would turn out to be and I was advised to return to Cambridge and carry on with my research. It was a confusing time.”

Professor Hawking, who was speaking at BT’s Adastral Park in Martlesham, then recounted his early life and research. He also spoke about the impact of having children.

He said: “The birth of our three children, Robert, Lucy and Tim helped enormously with the difficulties of the MND symptoms. I felt lucky. I never imagined we would be able to have three beautiful and accomplished children. They are the best achievements in my life - if you can call children achievements.”

His speech also touched upon his realisation that MND and his disability would not stop him from achieving. 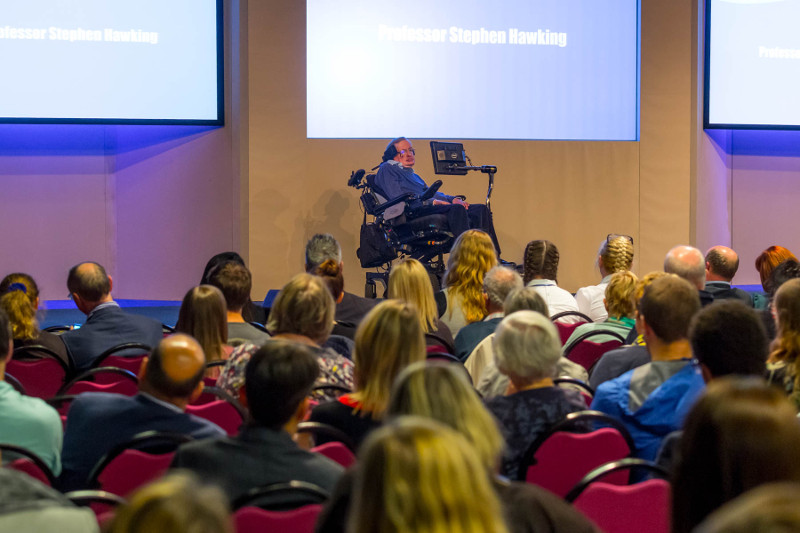 He said: “In 1970, I had a ‘Eureka’ moment. While going to bed one evening, I realised that black holes were not really black – they had a temperature and would glow red like hot coals. I had discovered a concept that was named after me - Hawking Radiation.

“It took my research down new avenues but what it also proved is that MND was no barrier to thinking, achieving and getting on with life. We just have to find new ways of doing things.”

The physicist also spoke about his difficulties with communication and how it impacted his life as his condition became worse.

He said: “If your voice is slurred like mine was, people can think you are mentally deficient and treat you accordingly.”

His inspiring speech also focused on his feelings around disability and his own beliefs about what can be achieved.

He said: “I feel lucky that my disability has not been a serious handicap in my scientific work and has not prevented me from leading a full and active life. I believe people with disability should concentrate on things that their handicap doesn’t prevent them from doing and not regret those they can’t do. Easily said I know.”

Professor Hawking was invited to give the speech by brain injury charity Headway Suffolk at its annual conference. The group, which is affiliated to the UK wide Headway charity, provides support for people with acquired brain injuries such as trauma and stroke, and other neurological conditions.

Helen Fairweather, Chief Executive of Headway Suffolk, said she was extremely grateful to the professor for agreeing to speak at its conference.

Each week, Headway Suffolk provides rehabilitation and therapy to 250 people in the region who have an acquired brain injury or neurological condition.